Earth now has TWICE as much heat trapped than it did in 2005 thanks to increases in greenhouse gas emissions due to human activity, NASA warns

Earth’s energy imbalance has doubled in the 14-year period from 2005 to 2019, according to a study led by NASA researchers.

This means more energy is being absorbed from the Sun than is reflected back to space, throwing the Earth’s energy ‘out of balance’ and warming the planet.

The Earth’s positive energy imbalance is due to increasing atmospheric pollution in the form of greenhouse gases like carbon dioxide (CO2), methane (CH4) and ozone (O3), researchers say.

These pollutants block the Earth’s radiant heat from escaping into space, increasing absorption of sunlight and trapping heat within the atmosphere.

Unless the rate of heat uptake subsides, greater changes in climate than are already occurring should be expected, the experts warn.

WHAT IS ENERGY IMBALANCE?

Energy imbalance is described as the difference between the amount of energy from the sun arriving at the Earth and the amount returning to space.

Earth’s climate is determined by a delicate balance between how much of the Sun’s radiative energy is absorbed in the atmosphere and at the surface and how much thermal infrared radiation Earth emits to space.

A positive energy imbalance means the Earth system is gaining energy, causing the planet to heat up.

Most of the energy imbalance warms the ocean. The remainder heats the land, melts ice and warms the atmosphere.

Earth’s energy imbalance is still relatively small – a 0.3 per cent difference between solar radiation absorbed and thermal radiation emitted to space as of 2019.

But any kind of positive imbalance increases the risk of ice sheet disintegration and sea level rise during this century.

‘The trends we found were quite alarming in a sense,’ said study author Dr Norman Loeb at NASA’s Langley Research Center in Hampton, Virginia.

And according to a 2016 study, energy imbalance is ‘the most fundamental metric defining the status of global climate change’.

Earth’s climate is determined by a delicate balance between how much of the Sun’s radiative energy is absorbed in the atmosphere and at the surface – mostly by the oceans – and how much thermal infrared radiation Earth emits to space.

A positive energy imbalance means the Earth system is gaining energy, causing the planet to heat up.

The warming drives other changes, such as snow and ice melt, and increased water vapour and cloud changes that can further enhance the warming.

Earth’s energy imbalance is the net effect of all these factors.

Scientists at NASA and the National Oceanic and Atmospheric Administration (NOAA) compared data from two independent measurements to determine the positive energy imbalance. 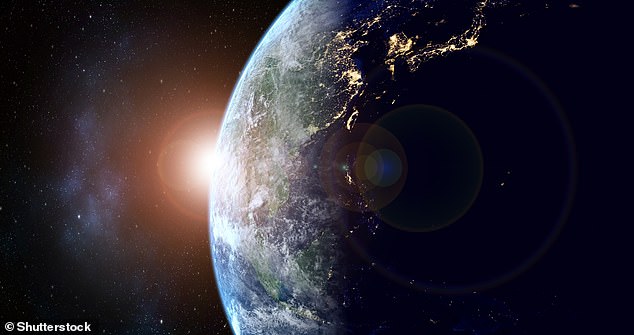 Since about 90 per cent of the excess energy from an energy imbalance ends up in the ocean, changes in ocean heat should match overall trends of incoming and outgoing radiation, NASA says.

‘They’re both showing this very large trend, which gives us a lot of confidence that what we’re seeing is a real phenomenon and not just an instrumental artefact.’

To determine the primary factors driving the imbalance, the team used a method that looked at changes in clouds, water vapour, combined contributions from trace gases and the output of light from the Sun.

It also determined something called ‘surface albedo’ – the amount of light reflected by the Earth’s surface – as well as tiny atmospheric particles called aerosols and changes in surface and atmospheric temperature distributions.

The study reveals that the doubling of the imbalance is partially the result an increase in greenhouse gases due to human activity, also known as anthropogenic forcing.

Additionally, a decrease in clouds and sea ice lead to more absorption of solar energy. This is because their reflective white surfaces are ideal for bouncing back the Sun’s light.

On top of this, researchers point to the Pacific Decadal Oscillation (PDO) – a climatic event which cover vast areas of the Pacific Ocean over periods of 20 to 30 years.

A flip of the Pacific Decadal Oscillation (PDO) from a cool phase to a warm phase likely played a major role in the intensification of the energy imbalance. 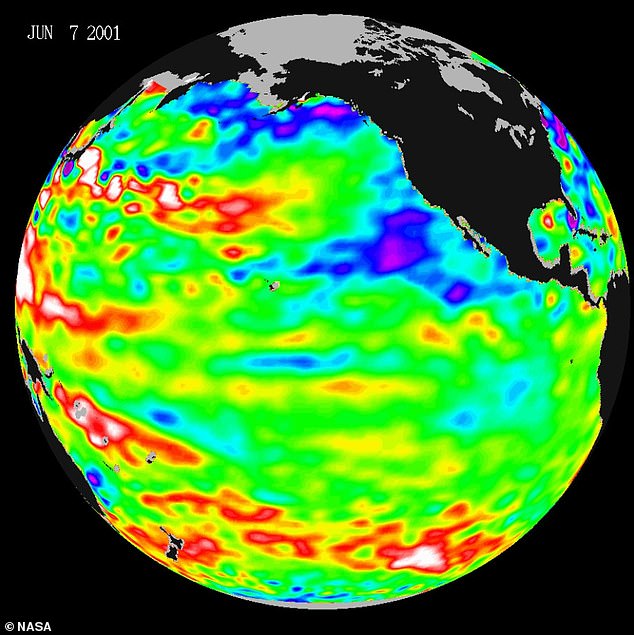 The Pacific Decadal Oscillation (PDO) is a term used to explain climatic events that cover vast a area of the Pacific Ocean. Exceedingly high or low temperatures from the PDO results in a horseshoe-like pattern off the western coast of the US (pictured)

An intensely warm PDO phase that began around 2014 and continued until 2020 caused a widespread reduction in cloud coverage over the ocean and a corresponding increase in the absorption of solar radiation.

‘It’s likely a mix of anthropogenic forcing and internal variability,’ said Dr Loeb. ‘And over this period they’re both causing warming, which leads to a fairly large change in Earth’s energy imbalance. The magnitude of the increase is unprecedented.’

The study, published in the journal Geophysical Research Letters, is only a snapshot relative to long-term climate change.

Because of this, it’s not possible to predict with any certainty what the coming decades might look like for Earth’s energy balance, they say.

But observing the magnitude and variations of Earth’s energy imbalance are vital to understanding Earth’s changing climate, according to the team.

The Pacific Decadal Oscillation (PDO) is a recurring pattern of ocean-atmosphere climate variability centered over the mid-latitude Pacific basin.

It has the potential to accelerate global warming and increase the severity of El Nino episodes.

The PDO has positive and negative phases.

Positive phases of the PDO tend to be associated with periods of more rapid global warming, while cold PDO events have been linked to severe droughts spanning many years in south western US, as well as increased rainfall over eastern Australia.

It is thought that negative phases could be linked to times of slower warming.

This is because cold phases of the PDO tend to increase mixing of colder, deep ocean waters with warmer surface waters.

This temporarily reduces the rate of global warming caused by increasing greenhouse gas emissions. Positive phases have the opposite effect.