Solar eclipse: Moon blocks out the sun over Canada

As the moon passed between the Earth and the Sun, a partial solar eclipse took place on Thursday morning which was visible in parts of the UK. The annular eclipse, as the phenomenon is known, sees the Sun appear as a bright ring known as the “Ring of Fire”. Here is footage of the solar eclipse as seen from Canada on Thursday.

An annular eclipse takes place when the Sun and Moon are exactly in line with the Earth, however the apparent size of the Moon is smaller than that of the Sun.

This phenomenon causes the Sun to appear as a very bright ring, dubbed the “Ring of Fire”.

People in the UK may have seen a crescent sun instead of a ring on Thursday morning as this is a partial eclipse.

Those in some parts of the UK looking to catch a glimpse of the phenomenon may have been disappointed, as forecasters predicted the eclipse could be blocked by the weather conditions. 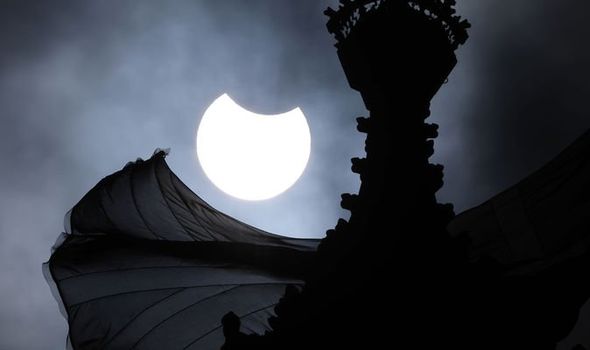 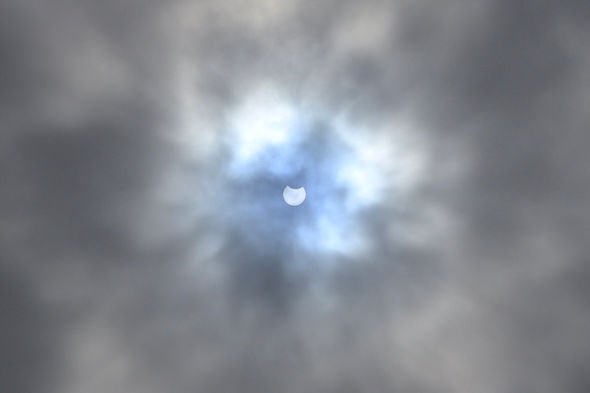 Prior to the eclipse, the Met Office predicted “fleeting” visibility of the eclipse in many regions due to cloud cover.

Central and South East England were expected to have clear spells for the occasion.

Parts of Scotland, such as Lerwick and Stornoway, were cited as the most favourable places to watch the phenomenon in the UK.

Dr Emily Drabek-Maunder, an astronomer at the Royal Observatory Greenwich, said the ‘Ring of Fire’ will be seen from Russia, Greenland and northern Canada.

She told PA: “From the UK, the annular solar eclipse will be a partial eclipse, meaning that we’ll only see the moon pass in front of a small part of the sun.”

People have were reminded not to look at the Sun with the naked eye as this can cause severe damage.

Dr Drabek-Maunder said: “The eclipse from the UK will only be visible with certain techniques and optical aids.

“Never look at the sun directly or use standard sunglasses – it can cause serious harm to your eyes.”

Some people were fortunate enough to catch a glimpse of the eclipse this morning, while others missed out due to cloud.

One person said on Twitter: “Amazing to see a partial eclipse here in the UK. Managed to snap during some heavy clouds”.

Another person tweeted: “We tried but the clouds persisted and no eclipse for us. Some beautiful pictures coming from across the UK with the brief breaks in the clouds elsewhere”.

After today, the next eclipse is not due to take place until autumn next year.

Dr Daniel Brown, an astronomy expert at Nottingham Trent University, said: “Today we see a partial solar eclipse in the UK. This means for us only 20-30 percent of the Sun is covered by the Moon, so no chance of noting the usual eery darkening of the day during such an eclipse. But if you observe it safely, you can note the Sun’s disk being obscured.

“If you were able to observe this much further north in the arctic, you would also not see the Sun totally eclipsed.

“For once we can actually use the term super moon to describe this, since the Moon was rather close to us at the last full moon (super moon), this New Moon is rather small as it pushes in front of the Sun. So it’s just that bit too small and we end up with a beautiful ring, sometimes called the ring of fire.

“Overall, this eclipse is a beautiful example of how striking objects in our skies like the Sun and Moon move and interact.

“So get out there while you have time and enjoy it safely using pinholes, filters or projecting the sun. Next chance you will have is October 2022.”