The China National Space Administration (CNSA) released a new image of its Zhurong rover on Mars that was captured by the Tianwen-1 orbiter circling the Red Planet.

The high-resolution image shows the landing zone in Utopia Planitia, the same region that NASA’s Viking Lander 2 touched down in 1979.

A dark area can be seen where the rover landed, which CNSA suggests was caused by the engine plume during landing.

The image also shows symmetrical bright stripes, surrounding the rover and lander to the north, that are actually particles of fine dust from when fuel was emptied from the vehicles. 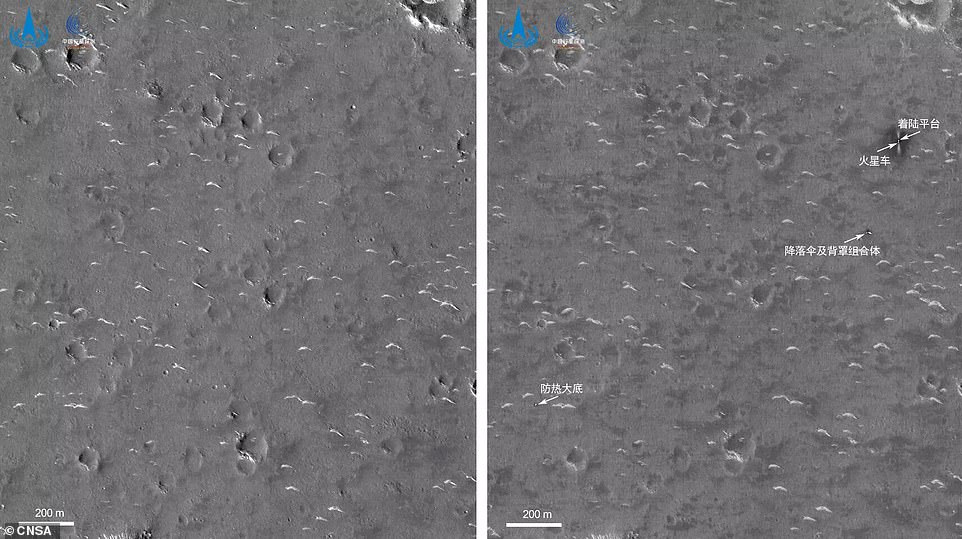 The China National Space Administration (CNSA) released a new image of its Zhurong rover on Mars that was captured by the Tianwen-1 orbiter circling the Red Planet. A dark area (middle arrow) can be seen where the rover landed, which CNSA suggest was caused by the engine plume during landing

China landed its rover on Mars on May 15, following in the US’s footsteps – NASA touched down on the Red Planet three months prior.

The Chinese rover – named Zhurong after a god of fire in Chinese folk tales – is about the size of a small car and weighs 530 pounds.

That is about one-fourth the weight of NASA’s two currently operating Mars rovers, Curiosity and Perseverance.

Zhurong drove down from its landing platform to the Martian surface on May 22 and has embarked on its mission to study the Red Planet. 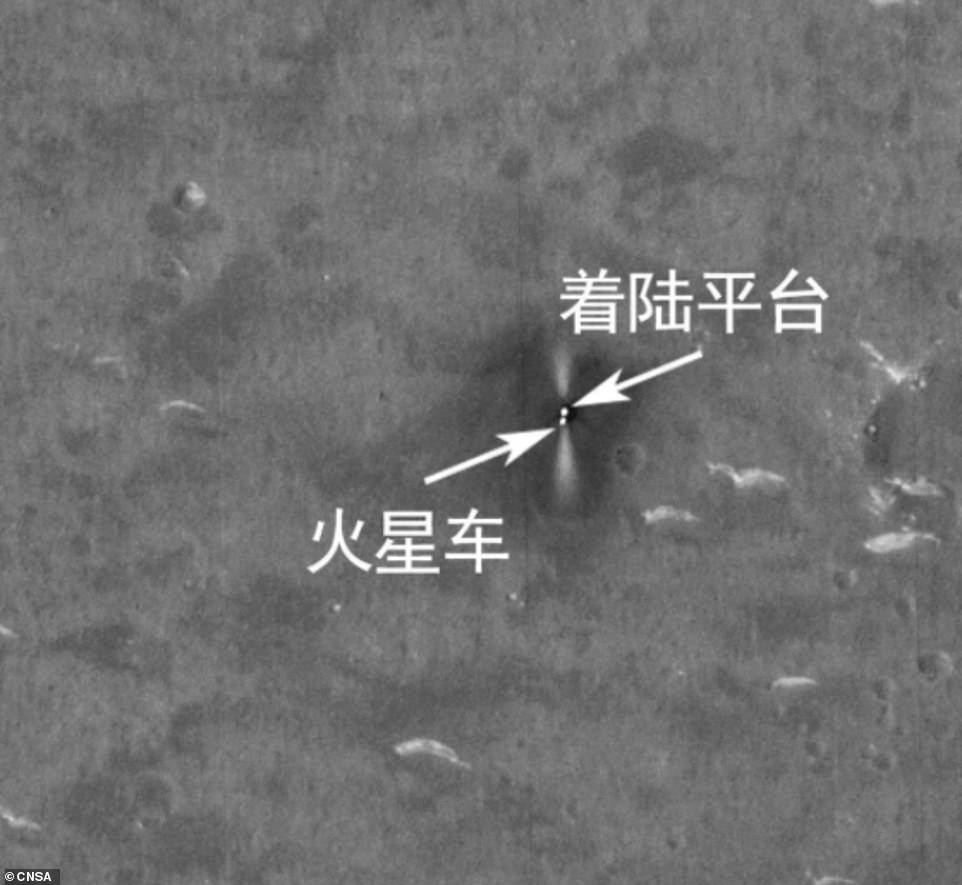 And now, CNSA has shared in image of the rover as it travels across the dusty landscape.

‘In the image, taken by a high-resolution camera installed on the orbiter of Tianwen-1 at 6pm on June 2 (Beijing Time), two bright spots are visible in the upper right corner. The larger one is the landing platform, and the smaller one is the Zhurong Mars rover,’ CNSA shared in a statement.

Zhurong has been working on Mars for 23 Martian sols (days), investigating its new environment and conducting scientific explorations.

A Martian day is approximately 40 minutes longer than a day on Earth.

All scientific equipment aboard the rover is turned on, which will analyze the Martian soil and atmosphere, capture images, chart maps and look for water and signs of ancient life.

With an expected lifespan of at least 90 Martian sols (about three months on Earth), Zhurong will record the Martian landscape with high-resolution three-dimensional images and analyze the material composition of the planet’s surface. 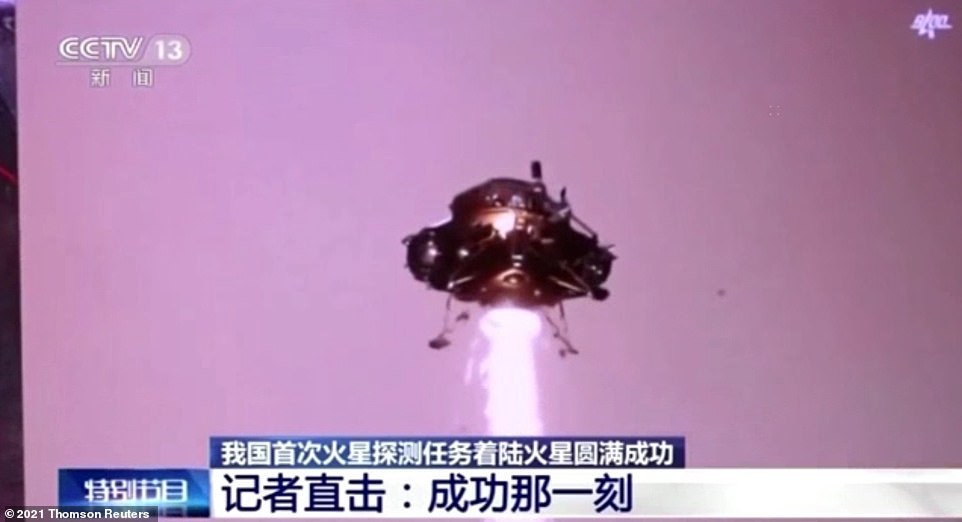 China landed its rover on Mars on May 15, which follows in the US’s footsteps – NASA touched down on the Red Planet three months before 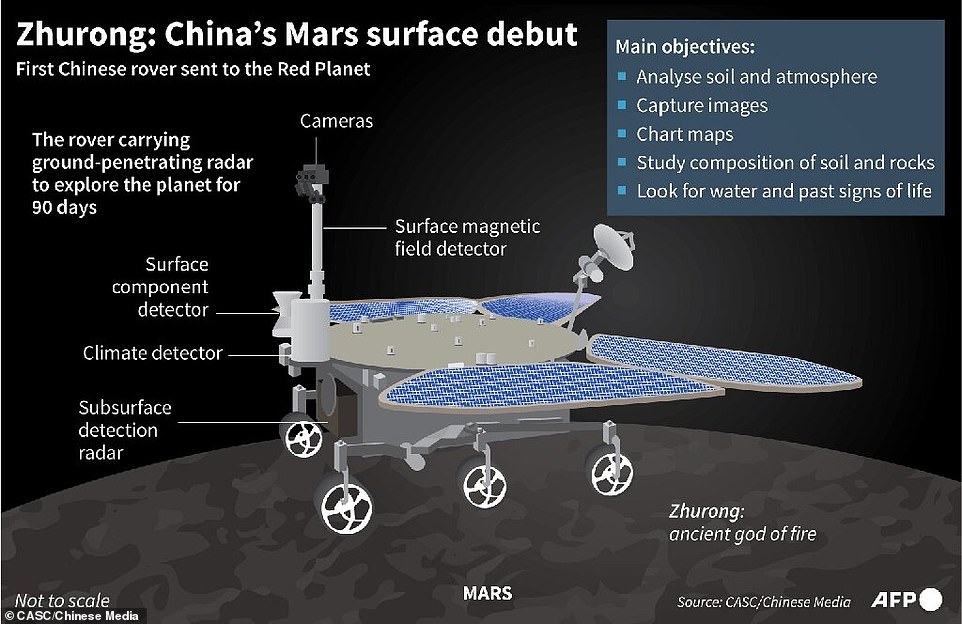 Chinese officials plan to use the rover to analyze Martian soil and atmosphere, capture images, chart maps and look for water and signs of ancient life

It will also detect its sub-surface structure and magnetic field, search for traces of ice and observe the surrounding meteorological environment.

CNSA, which keeps a tight lid on its endeavors, only announced the name of the rover in April.

‘Zhurong is the god of fire in ancient Chinese mythology, which echoes with the Chinese name of the red planet, Huoxing (meaning the planet of fire),’ CNSA shard in a statement.

‘Fire brought warmth and brightness to the ancestors of humankind, and fire lit up human civilization.’

‘The name is another example of Chinese aerospace workers’ scientific romance as they have named spacecraft, including Tianwen, Chang’e, and Beidou, after Chinese traditional culture, which also shows the Chinese people’s spirit of exploration and cultural confidence,’ Wu Yanhua, deputy director of the CNSA said.

Zhurong’s touchdown made China the first country to carry out an orbiting, landing and roving operation during its first mission to Mars – a feat unmatched by the only other two nations to reach the Red Planet so far, the US and Russia. 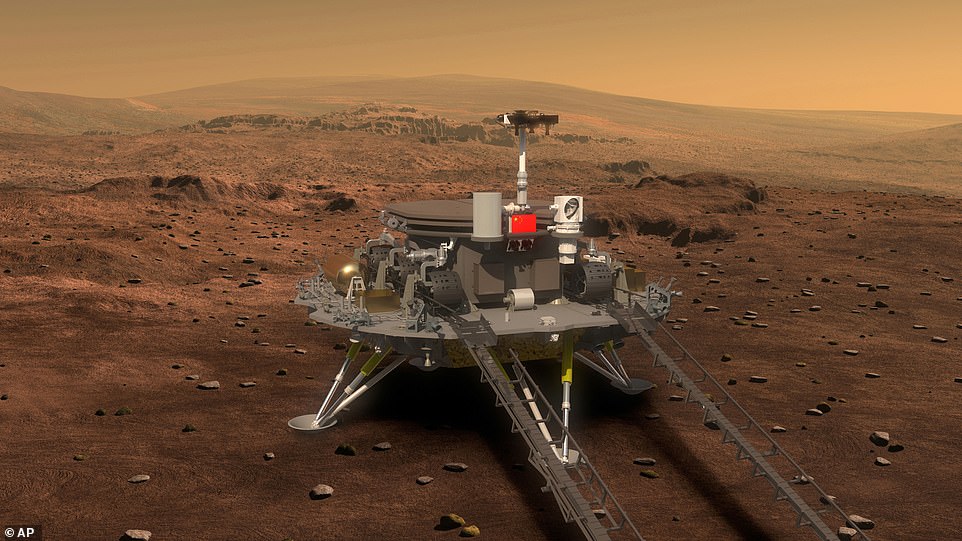 President Xi Jinping sent his ‘warm congratulations and sincere greetings to all members who have participated in the Mars exploration mission’, Xinhua reported.

China has now sent astronauts into space, powered probes to the moon and returned the first moon samples to Earth in more than 45 years, as well as landed a rover on Mars.

In April, it also launched Tianhe, the maim section of what will be a permanent space station, aimed to rival the International Space Station (ISS).

In later missions planned for 2021 and 2022, China will launch the two other core modules, four manned spacecraft and four cargo spacecraft.

Officials from the Chinese space agency are working to become a space superpower alongside the US and Russia.

They have already sent the first lander to explore the far side of the Moon – sharing photos from the part of our nearest neighbour we rarely see as part of the Chang’e-4 mission.

In November 2020 they sent the Chang’e-5 space probe to the Moon to collect and return the first samples of lunar soil in 45 years.

This was done in collaboration with the European Space Agency who provided tracking information for the Chinese spaceship.

Chang’e-6 will be the first mission to explore the south pole of the Moon and is expected to launch in 2023 or 2024.

Chang’e-7 will study the land surface, composition, space environment in an overall mission, according to the Chinese space authority, while Chang’e-8 will focus on technical surface analysis.

China is also reportedly working on building a lunar base using 3D printing technology and sending a future crewed mission to the surface.

Mission number eight will likely lay the groundwork for this as it strives to verify the technology earmarked for the project.

The CNSA is also building an Earth-orbiting space station where Chinese astronauts will conduct scientific experiments, similar to the crew of the ISS.

The agency also launched a mission to Mars in summer 2020 and landed a rover on the red planet in May 2021.

China is also said to be working on a project to build a solar power generator in space, that would beam energy back to Earth and becoming the largest man made object in orbit.

They also have a number of ambitious space science projects including satellites to hunt for signs of gravitational waves and Earth observation spacecrafts to monitor climate change.