The stuff of nightmares or a future hero? Cyborg COCKROACH with camera ‘backpack’ can be steered remotely and could be used in search and rescue missions

Scientists have demonstrated how a live cockroach equipped with a computerised ‘backpack’ could be steered remotely for search and rescue missions.

The backpack, created by a team at Nanyang Technological University in Singapore, is a small computer chip fitted with an infrared camera, carbon dioxide sensor and a temperature/humidity sensor, among other functions.

In lab trials, the team fitted the backpack to a Madagascar hissing cockroach and successfully used it to find humans in a simulated disaster scene.

The cockroach fitted with the backpack also had electrodes implanted in its cerci – the protruding appendages on its left and right side.

Electrical currents were delivered to the two cerci via the electrodes to induce turning, allowing the scientists to control the direction it moved in.

When the left cercus was stimulated, the insect made a right turn – in a clockwise rotation – and vice versa.

In this way, the scientists can essentially decide which direction the cockroach moves, akin to controlling a rowing boat with oars. 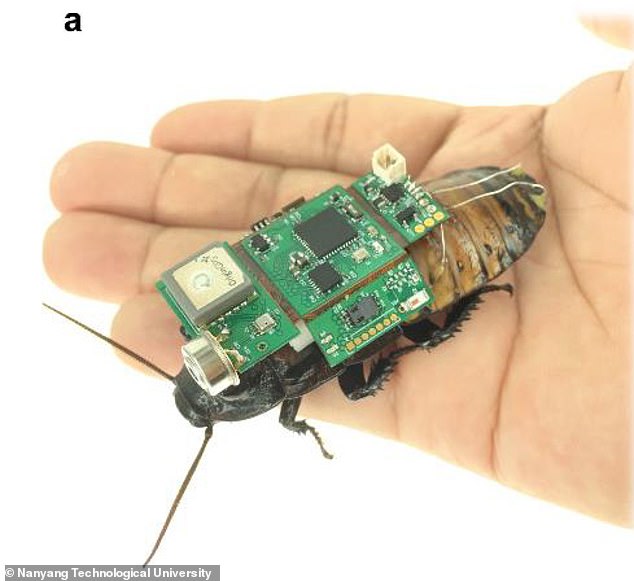 In an impressive scientific feat, researchers from Nanyang Technological University in Singapore have fitted backpacks to a cockroach to dictate the direction of its movement

The cockroach still has control over whether its legs move, however – meaning the scientists don’t dictate whether it starts or stops.

The system can navigate to predetermined destinations and autonomously traverse unknown obstacle-terrain, as well as detect human presence.

According to the team, their technology – what they call an ‘insect-computer hybrid system’, or cyborg insect – is something of a first step towards fully robotic systems of a similar size to a cockroach.

‘There is still a long way to go before artificial mini robots are really used for search and rescue missions in disaster-hit areas,’ the experts say in their paper.

‘[This is] due to hindrance in power consumption, computation load of the locomotion and obstacle-avoidance system.

‘Insect-computer hybrid system, which is the fusion of living insect platform and microcontroller, emerges as an alternative solution.’

In a search and rescue mission, such as a collapsed building, fast pinpointing of victims trapped in the wreckage is crucial to maximise their chance of survival.

But the locations of the trapped victims are usually inaccessible to humans and can take several precious hours to determine.

Currently, bulky equipment such as electronic cameras and seismic sensors are used to search through rubble, as well as sniffer dogs.

Mini robots with dimensions of four inches (10cm) or less potentially have an advantage over such methods in increasing search efficiency by crawling through tight gaps.

Cockroaches are also famously resilient and hard to kill with force – meaning they’d stand a good chance among the compact rubble. 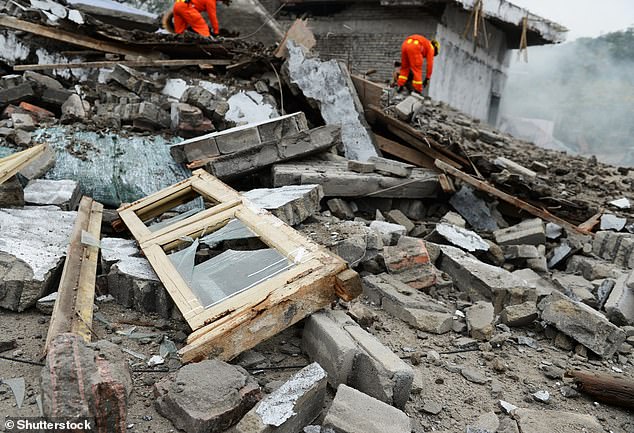 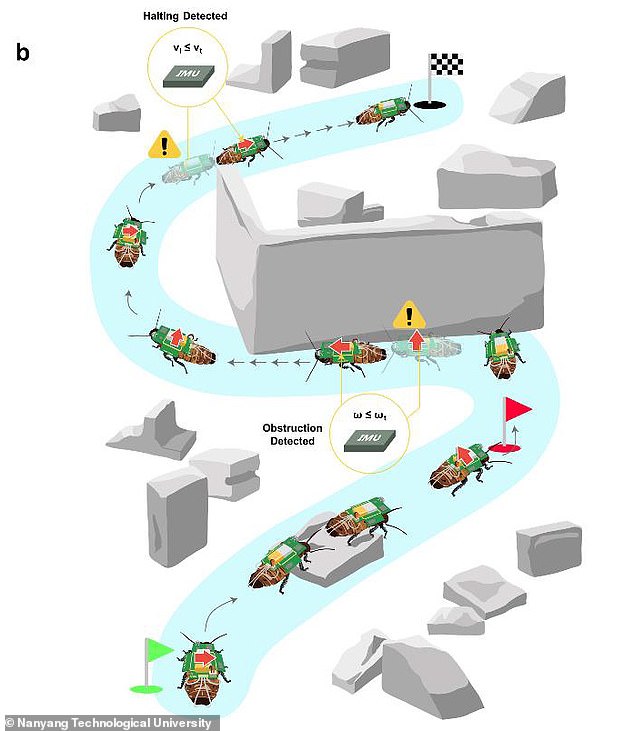 Electrical currents can be delivered to the two cerci via the electrodes to induce turning, allowing the scientists to control the direction they move in. When the left cercus was stimulated, the insect made a right turn – in a clockwise rotation – and vice versa

The research team say their cockroach fitted with its backpack had a 94 per cent success rate while finding humans in lab situations with tall obstacles, while high-accuracy human presence detection using infrared camera was also achieved.

It could also operate for up to 2.2 hours using a 120 mAh battery, suitable for a practical urban search and rescue (USAR) mission.

Researchers say they will adopt the technology for assisting USAR missions in disaster-hit areas in the near future.

The team’s research paper, entitled, ‘Insect-Computer Hybrid System for Autonomous Search and Rescue Mission’, has been published as a pre-print.

Researchers at North Carolina State University have already worked with cockroaches fitted with backpacks that locate the sources of sound in emergency situations.

The researchers also developed technology that can be used as an ‘invisible fence’ to keep the biobots in the disaster area.

CYBORG ROACHES COULD HELP IN DISASTERS BY DETECTING SOUND

In 2014, researchers fitted cockroaches with electrical backpacks complete with tiny microphones to detect the faintest of sounds.

The idea is that cyborg cockroaches, or ‘biobots’, could enter crumpled buildings hit by earthquakes, for example, and help emergency workers find survivors.

‘In a collapsed building, sound is the best way to find survivors,’ said Alper Bozkurt, an assistant professor of electrical and computer engineering at North Carolina State University.

‘Once we’ve identified sounds that matter, we can use the biobots equipped with microphone arrays to zero-in on where those sounds are coming from.’

The ‘backpacks’ control the robo-roach’s movements because they are wired to the insect’s cerci – sensory organs that cockroaches usually use to feel if their abdomens brush against something.

By electrically stimulating the cerci, cockroaches can be prompted to move in a certain direction.

In fact, they have been programmed to seek out sound.

One type of ‘backpack’ is equipped with an array of three directional microphones to detect the direction of the sound and steer the biobot in the right direction towards it.

Another type is fitted with a single microphone to capture sound from any direction, which can be wirelessly transmitted – perhaps in the future to emergency workers.

They ‘worked well’ in lab tests and the experts have developed technology that can be used as an ‘invisible fence’ to keep the biobots in a certain area such as a disaster area.

This is significant because it can be used to keep the biobots within range of each other so that they can be used as a reliable mobile wireless network.

This technology could also be used to steer biobots to light sources, so that the miniaturised solar panels on biobot backpacks can be recharged.