Ride-sharing giant Uber has teamed up with UK automotive firm Arrival to roll out a fleet of stylish electric cars in Europe.

‘Arrival Car’ will be purpose-built for ride-hailing services, designed in partnership with Uber drivers and expected to enter production in the second half of 2023.

Londoners will be able to hail one of the vehicles – depicted in new preliminary concept images with a spacious and comfy-looking interior – by 2025.

As well as becoming fully electric across London by 2025, Uber hopes to have an entirely electric vehicle (EV) fleet across the UK, Europe and North America by 2030. 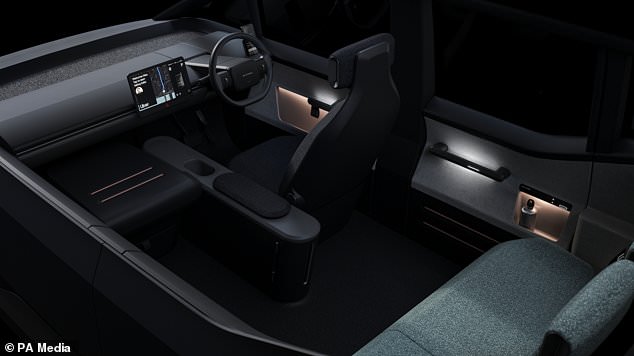 Arrival Car will address a ‘global need’ to shift ride-hailing and car sharing services from petrol and diesel to electric, in order to reduce greenhouse gas emissions and improve air quality in cities.

‘As our cities open up we have an opportunity to make sure that urban transport is cleaner than ever before,’ said Jamie Heywood, Uber’s regional general manager for Northern and Eastern Europe.

‘Uber is committed to helping every driver in London upgrade to an EV by 2025, and, thanks to our Clean Air Plan, more than £135 million has been raised to support this ambition.

‘Our focus is now on encouraging drivers to use this money to help them upgrade to an electric vehicle, and our partnership with Arrival will help us achieve this goal.’ 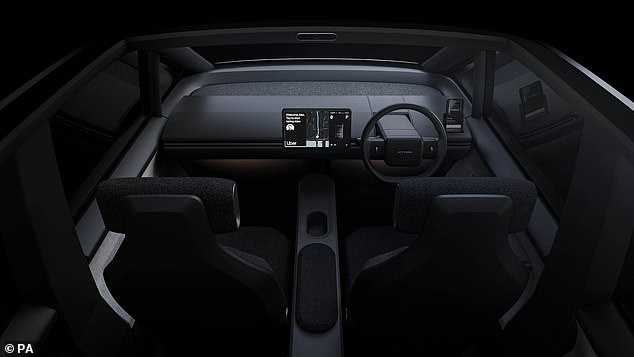 Concept image of the Arrival Car, being created as part of a new deal between Uber and Arrival, to produce electric cars for ride-hailing services 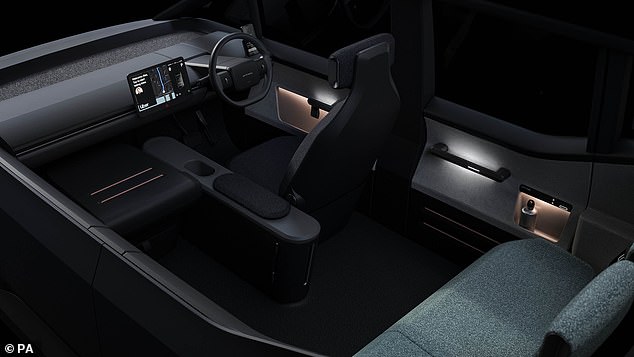 Uber drivers will be invited to join the design process and ensure the final vehicle design, expected to be revealed before the end of this year, ‘meets their needs’, Arrival said.

According to firm, the car ‘will prioritise driver comfort, safety, and convenience, while ensuring the passengers enjoy a premium experience’.

Interior shots of the car from the concept images show a tablet next to the steering wheel, but otherwise minimal controls on the dashboard.

There’s a retractable passenger seat up front and in the back a grey, lounge-style seat with what looks like plenty of leg room.

Arrival Car will join Arrival’s previously announced commercial products, the Bus and Van, which will create an ‘integrated transportation ecosystem’ on the roads.

Arrival is also deploying its first three ‘microfactories’ in North and South Carolina, US and Bicester, UK in 2021 for production.

‘We are confident that electrifying ride-hailing vehicles will have an outsized impact on cities, and we are keen to support drivers as they manage this transition,’ said Tom Elvidge, Arrival’s senior vice president for mobility in the UK.

‘Arrival Car will be designed around drivers’ needs to create a vehicle that is affordable, durable and desirable.’ 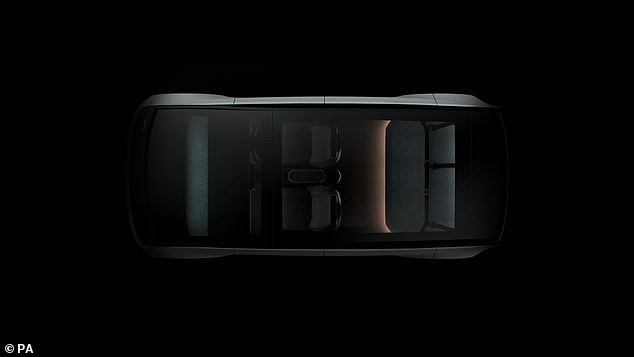 Bird’s eye view of the vehicle’s interior, front facing left. The final vehicle design expected to be revealed before the end of 2021

So far in London, more than 3.5 million trips have taken place in fully electric vehicles, helping to reduce emissions and improve air quality in the capital.

But this will have to keep rising as the UK government wants to see the large scale adoption of all-electric vehicles in the next 10 years.

It’s banning the sale of petrol and diesel cars from 2030, in a bid to eliminate greenhouse gas emissions and achieve the government’s net zero emissions target by 2050.

Following the launch of Uber’s Clean Air Plan in London two years ago, more than £135 million has been raised to support drivers with the cost of switching to a fully electric vehicle.

The plan, announced in 2018, proved controversial, as it was funded by Uber drivers to the tune of 15p for every mile they drove.

A target set by the government in June 2019 will require the UK to bring all greenhouse gas emissions to net zero by 2050.

Former Prime Minister Theresa May had announced the target, saying the plans were ambitious but crucial for protecting the planet for future generations.

The move will require huge changes such as more renewable electricity generation, phasing out new petrol and diesel cars by at least 2035 and a 20 per cent cut in beef and lamb consumption.

‘The UK kick-started the Industrial Revolution, which was responsible for economic growth across the globe but also for increasing emissions,’ said said Energy and Clean Growth Minister Chris Skidmore at the time.

‘We’re leading the world yet again in becoming the first major economy to pass new laws to reduce emissions to net zero by 2050 while remaining committed to growing the economy – putting clean growth at the heart of our modern Industrial Strategy.’

Net zero means any emissions would be balanced by schemes to offset an equivalent amount of greenhouse gases from the atmosphere, such as planting trees or using technology like carbon capture and storage.