The beginning of the end for air traffic control towers? London City airport ditches its 30-year-old tower in favour of a new mast fitted with high-definition cameras monitored by controllers sitting 70 MILES away

London City has become the world’s first major airport to ditch its traditional air traffic control tower and replace it with a mounted system of cameras and sensors.

The 50metre (164ft) tall tower features 14 HD cameras which give a full 360° view of the airfield and the footage is beamed in real-time to a control room 70 miles away.

Air traffic controllers use the video to organise traffic and orchestrate take-offs and landings at the airport.

The decision to go fully remote with the airport’s air traffic control comes after a successful two year trial. 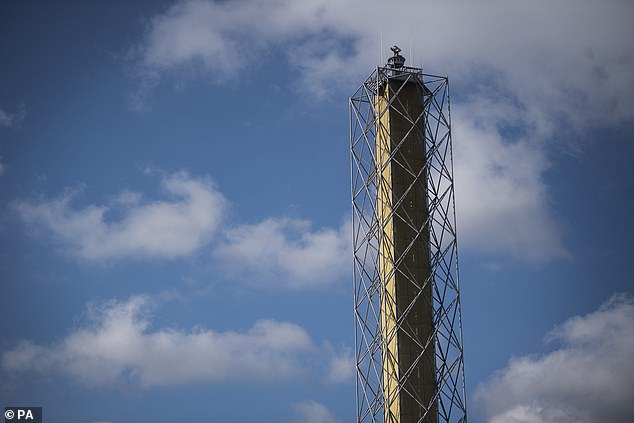 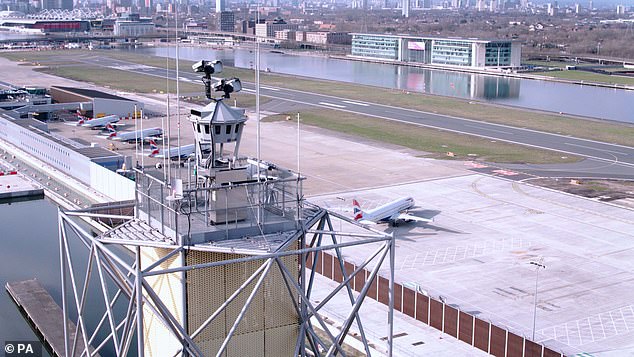 The cameras and sensors can pan, tilt and zoom at request and beam a live stream to the Swanwick base of air traffic control provider Nats.

Three fibre networks connect the London-based tower to the Hampshire control room, providing a back-up and a reserve to the back-up in case of technical failings.

A live feed of footage and audio from the airfield, plus radar information, is displayed on 14 screens once it arrives at Swanwick.

The panoramic moving image can be overlaid with data such as aircraft call signs, altitude and speed, as well as weather readings.

Nats’ airports director Jonathan Astill said the access to information means the digital system is ‘a better tool to use in keeping aircraft apart’ than the usual method.

The boss of easyJet has urged the government to ‘take responsibility’ and give airline operators and customers an update on its plans for the easing of travel restrictions.

CEO Johan Lundgren said the carrier was ready to fly passengers on their summer holidays but remained in limbo without clarification on what travel corridors will be opened up in May.

Mr Lundgren also called on Ministers to put popular destinations such as Spain, Portugal and Greece in the lowest risk category when foreign holidays resume.

But the travel chief warned of chaos at airports if ministers fail to boost border resources in time for the re-start.

Easyjet is using new research to declare that much of Europe should be declared ‘green’.

Mr Lundgren told BBC Radio 4’s Today programme: ‘We have always set out that we were going to be ready when we were allowed to start flying again, which means that we have basically kept the fleet in what we call flight-ready conditions. But clearly we now need to get some clarity on this.

‘We need to know what countries are going to go in what categories – the green amber red, framework – and we need to know when that can start to happen, so the clock is ticking. We urge the government to come out and communicate this.’

‘It does enhance the controller’s ability to access data and to access information that then gives them better situational awareness,’ he told the PA news agency.

Mr Astill said a number of other airports are ‘looking at’ what London City has done, adding: ‘It’s definitely the future.’

He insisted the connection between London City and Swanwick is ‘resilient to cyber attack’ and ‘very difficult to hack into’.

The remote tower technology was developed by Saab Digital Air Traffic Solutions, and has been tested at remote airports in Sweden and two was introduced at Cranfield airfield in Bedfordshire.

London City’s chief operating officer Alison FitzGerald admitted it ‘always raises an eyebrow’ from passengers when they are told about it.

She insisted the project is ‘not cost-saving’ for the airport.

‘This isn’t about removing air traffic controllers,’ she said. ‘It’s more about making it safer and making it more efficient.’

Ms FitzGerald added that in future, the system could potentially enable flights that would previously have been cancelled or diverted due to poor visibility to take off or land at the airport.

Construction of the multi-million-pound new tower was completed in 2019, with the switch to fully remote air traffic control taking place in January.

Only a handful of daily flights are operating at the airport due to the coronavirus pandemic, but Ms FitzGerald said the technology will cope as demand for travel increases once restrictions are eased.

She said she is ‘cautiously optimistic’ for the summer season.

The airport forecasts that passenger numbers in August and September will reach 27 per cent and 32 per cent respectively of the same months in 2019.