Thousands of galaxies in the process of making stars have been spotted by an international team of astronomers using ultra-sensitive radio images.

It works by combining the signals from more than 70,000 antenna, located in stations across the Netherlands and in partner European countries including the UK.

By observing the same regions of sky repeatedly and combining the data to make a single very-long exposure image, the team detected the faint radio glow of stars exploding as supernovae, in tens of thousands of galaxies out to the most distant parts of the universe. 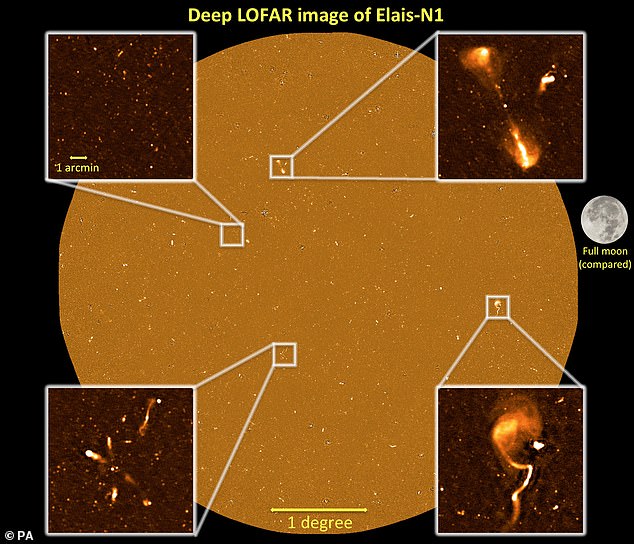 Pictured, the deepest LOFAR image ever made, in the region of sky known as Elais-N1, which is one of the three fields studied as part of this deep radio survey. The image arises from a single LOFAR pointing observed repeatedly for a total of 164 hours 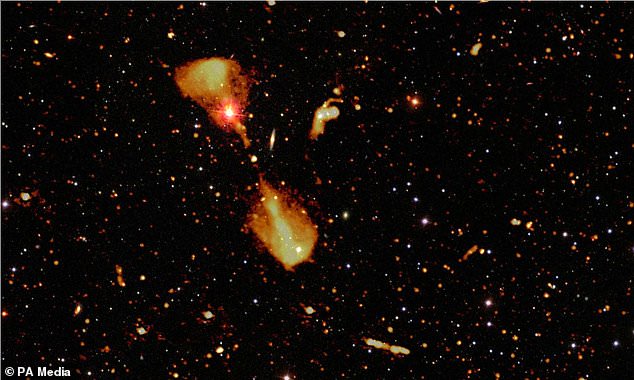 Pictured, images of radio galaxies from a deep LOFAR image, overlaid on an optical image of the sky

To produce the images, more than four petabytes of raw data – equivalent to about a million DVDs – were taken and processed.

Philip Best from the University of Edinburgh, who led the deep survey, said: ‘When we look at the sky with a radio telescope, the brightest objects we see are produced by massive black holes at the centre of galaxies.

‘However, our images are so deep that most of the objects in it are galaxies like our own Milky Way, which emit faint radio waves that trace their ongoing star-formation.

‘The combination of the high sensitivity of LOFAR and the wide area of sky covered by our survey – about 300 times the size of the full moon – has enabled us to detect tens of thousands of galaxies like the Milky Way, far out into the distant universe.

Team member Isabella Prandoni, from the Italian National Institute for Astrophysics in Bologna, added: ‘Star formation is usually enshrouded in dust, which obscures our view when we look with optical telescopes. But radio waves penetrate the dust, so with LOFAR we obtain a complete picture of their star-formation.’

LOFAR is operated by ASTRON, the Netherlands Institute for Radio Astronomy.

The UK is a partner country in the project, alongside Ireland, France, Germany, Italy, Latvia, the Netherlands, Poland and Sweden.