Less is more! People tend to add extra elements when asked to improve objects, ideas and situations – but removing them is actually more effective, study finds

Human brains struggle to take ideas or elements away from designs, such as a bricks in blueprint of a building – and instead tend to add more, a new study reveals.

In experiments, participants tasked with making a Lego Duplo building stronger tended to add more bricks rather than take them away.

In another computerised task, people tended to add coloured squares to a geometrical pattern to make it symmetrical, rather than remove the squares.

This mysterious way of thinking may innately bias the way architects design buildings, or could even add unnecessary expenses to governments and councils by adding departments rather than taking them away.

A human tendency to add rather than subtract could be widespread in companies around the world that employ teams of people who collaborate on ideas – from marketing to digital design and other creative or even non-creative industries.

The study has been led by Professor Gabrielle Adams and Professor Leidy Klotz, psychology researchers at the University of Virginia.

‘Improving objects, ideas or situations – whether a designer seeks to advance technology, a writer seeks to strengthen an argument or a manager seeks to encourage desired behaviour– requires a mental search for possible changes,’ they say in their research paper.

Professor Klotz said he was initially intrigued when building structures from Lego bricks with his two-year-old son.

‘We were building a Lego bridge, and the two columns on the bridge, one was longer than the other one. 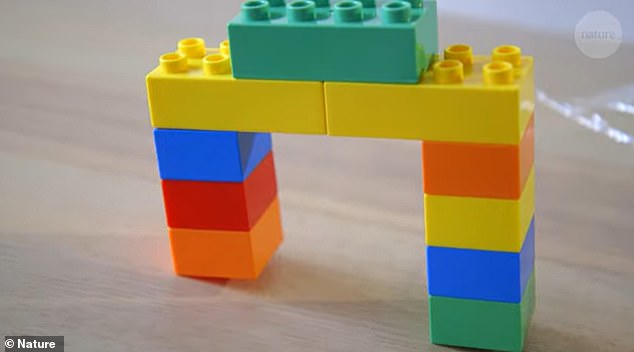 If you’d been tasked with making this structure stable, would you have added a brick to the left column, or taking one away from the right column?

‘To make the bridge level I turned around to add a block to the shorter column and by the time I had turned around [my son] had just removed a block from the longer column.’

He realised that the human brain may be prone to making improvements by adding more elements, rather than taking them away.

Another example can be seen in the pedal-less balance bikes used by young children.

These pedal-less bikes are a recent invention, and let the young riders push along the ground with their feet, almost like a rider on skateboard, rather than using stabilisers.

‘If you’ve seen a little two-year-old going on these things it just makes you disappointed that you didn’t have it when you were a kid – but the breakthrough was just taking away the peddles.’ 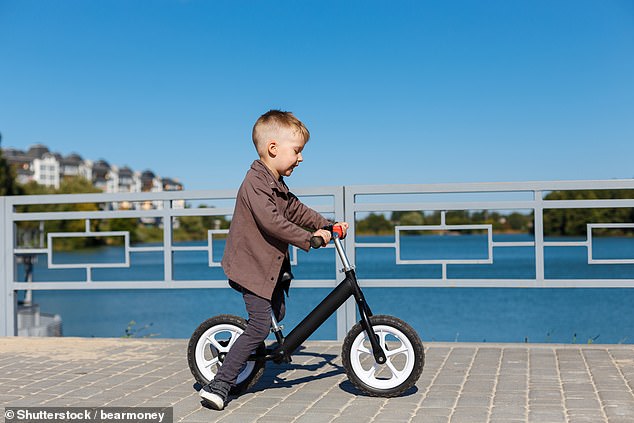 A small boy riding a pedal-less bike. Generations of people have learnt to ride a bike with the helpful addition of stabilisers – but could our learning to ride have been more pleasurable if designers had just taken away the pedals?

For their study, the researchers conducted experiments involving 1,153 participants to looked at how people respond to a diverse array of problems.

These problems ranged from solving a geometrical puzzle, stabilising a Lego structure and improving a miniature golf course.

In the Duplo task, 197 participants could stabilise the top platform of the structure so it could hold a masonry brick above the head of an action figure.

They could do this by either adding new supports to reinforce the single corner block or by removing the corner block and letting the platform sit perfectly flat on the layer below. 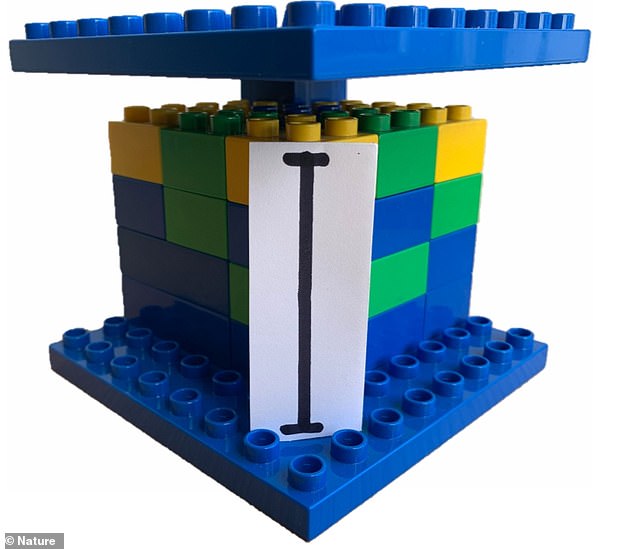 Pictured is one of the stimuli used in the experiments – a Lego Duplo structure. A toy action figure (image removed for reasons of copyright) stood at the height marked on the white paper. Participants could stabilise the top platform of the Lego structure so it could hold a masonry brick above the head of the action figure by adding new supports to reinforce the single corner block or by removing the corner block and letting the platform sit flush on the layer below

‘When we reminded participants that removing pieces is free, participants were much more likely to remove pieces from the structure than when we didn’t remind them,’ said Professor Adams.

In another round of experiments with more than 1,000 participants, the authors asked study participants to make a 10 by 10 grid of green and white boxes symmetrical.

They found that participants often added green boxes to the emptier half of the grid rather than removing them from the fuller half, even when doing the latter would have been more efficient. 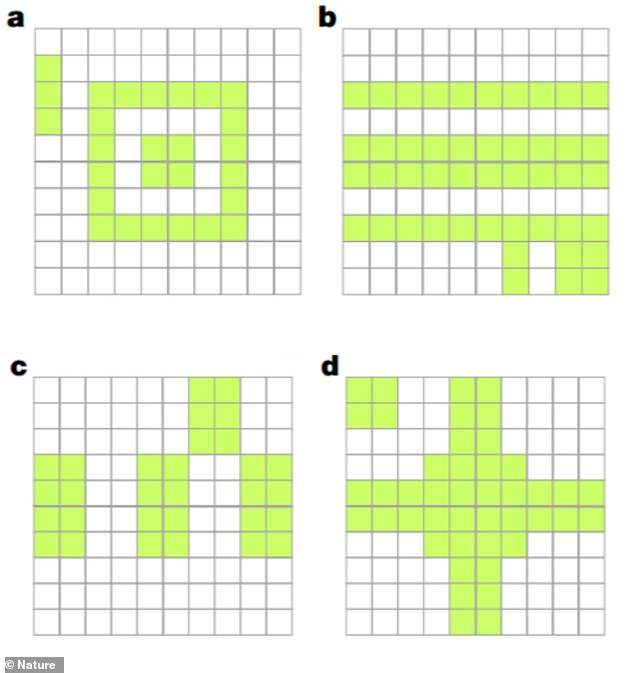 Participants could achieve symmetry by adding to the three empty quadrants or by subtracting from the marked quadrant. Again, they tended to choose the former

Follow-up experiments suggest that subtractive changes are cognitively less accessible to people, and so the default strategy becomes to add things.

The authors conclude that this may be one reason why people struggle to mitigate problems such as overburdened schedules, institutional red tape and damaging impacts on the planet.

The study has been published today in Nature and is accompanied by a separate piece of commentary by Heeyoung Yoon and Tom Meyvis – researchers who were not involved with the study.

Yoon and Meyvis point out that we may be inclined to add rather than subtract the because ‘subtractive solutions are also less likely to be appreciated’.

‘People might expect to receive less credit for subtractive solutions than for additive ones,’ they say.

‘A proposal to get rid of something might feel less creative than would coming up with something new to add.

‘It could also have negative social or political consequences – suggesting that an academic department be disbanded might not be appreciated by those who work in it, for instance.’