Incredible images reveal how cells exposed to AstraZeneca’s Covid-19 vaccine produce spike proteins just like the virus, triggering an immune response to fight off the disease

Scientists have produced stunning images showing exactly what happens to the cells of a person who is injected with the Oxford-AstraZeneca Covid-19 vaccine.

Images reveal how the jab forces the injected person’s own cells to make replicas of the real coronavirus spike, a glycoprotein, which sticks out from its surface.

The spikes on the surface of the host’s own cells are then recognised as a foreign invader by the immune system and attacked with antibodies.

The immune system remembers the shape of the spike and how to defeat it so that if a person does get infected in the future then they can rapidly fight off the virus. 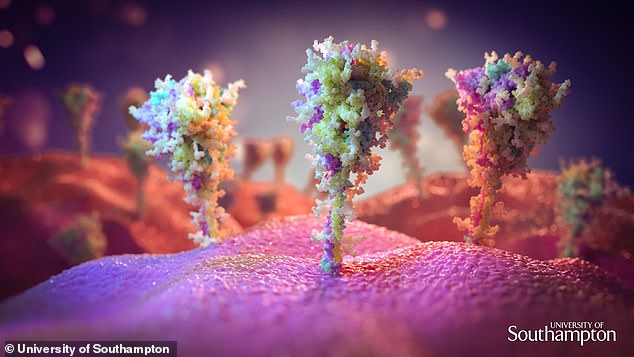 What is in the Oxford vaccine?

The most important component of the jab is the modified adenovirus, but this active ingredient is accompanied by other compounds in the injection.

For example, the vaccine also contains inactive ingredients such as polysorbate 80, an emulsifier, and a very small amount of alcohol (0.002mg per dose).

The vaccine also contains traces of magnesium (3 to 20 parts per million).

The manufacturing process involves creating a virus which contains the genetic code for the SARS-CoV-2 spike protein.

But this is done in small numbers and researchers need a way to make millions of copies.

In order to do this, a conveyor belt of host cells which replicate the adenovirus is needed.

Traditionally, this is done with chicken eggs. The modified virus is injected into the eggs, the egg cells amplify the number of copies and these are then weakened or neutralised and extracted for the vaccine.

This method is employed for some Covid-19 vaccines in development and also for flu jabs.

However, some institutions have replaced chicken cells with human cell lines, including the Oxford-Astrazeneca team working on ChAdOx1 nCoV-19.

These cells are called HEK-293 and they come from the kidney of a legally aborted foetus in 1973.

HEK-293 cells are not themselves the cells of the aborted foetus, but identical clones.

These cells are not injected in the vaccine, but are used to manufacture the modified virus before being extracted.

The AstraZeneca jab is under criticism at the moment for purported side-effects which may cause blood clots in a very small percentage of people.

But the vaccine is highly effective at protecting against Covid-19 and has been given to millions of Britons, with the 100 million doses ordered by the Government making up a quarter of the UK’s stockpile.

Researchers from the University of Oxford worked with Professor Max Crispin of the University of Southampton, an expert in virology and glycoproteins, to see how good their vaccine was at imitating the coronavirus spike.

Human cells in a laboratory were exposed to the vaccine and after two days the researchers looked at the shape and structure of the imitation spikes.

The method of analysis is called cryo-electron microscopy (cryoEM) and thousands of images were taken and combined as part of the study.

‘CryoEM is an immensely powerful technique which enabled us to visualise the dense array of spikes that had been manufactured and presented on the surface of the cells,’ she said.

Analysis of the glycoproteins themselves revealed the vaccine-induced spikes are almost identical to those of the virus.

‘In this study we set out to see how closely the vaccine induced spikes resembled those of the infectious virus.

‘We were really pleased to see a large amount of native-like spikes,’ Professor Crispin said.

‘This study will hopefully provide further understanding for the public, helping them see how the Oxford-AstraZeneca vaccine works.

‘Many people may not realise how their cells become little factories manufacturing viral spikes that then trigger the immune response needed to fight off the disease.

‘This may also provide reassurance that the vaccine is doing its job and generating the material that we need to present to our immune systems.’

The study has been published in the journal ACS Central Science. 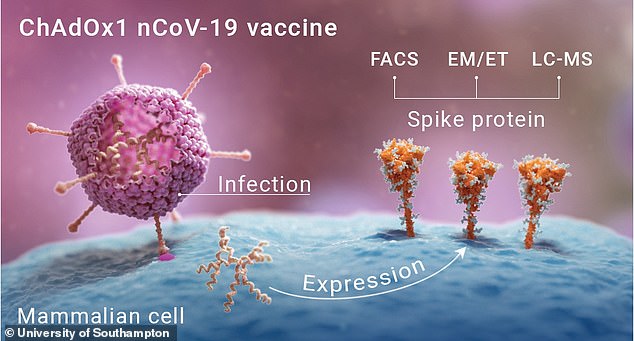 Scientists have produced stunning images showing exactly what happens to the cells of a person who is injected with the Oxford-AstraZeneca Covid-19 vaccine. Pictured, a graphic based on the new imaged showing how the vaccine (left) turns the cells of a person who has been injected into ‘little factories manufacturing viral spikes that then trigger the immune response needed to fight off the disease’ (right) 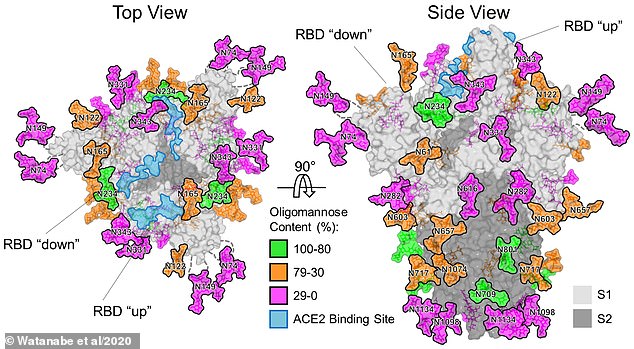 Professor Max Crispin previously found that the coronavirus (pictured)  is not as heavily protected or disguised as some viruses, such as HIV. He said the spike proteins are disguised by the virus, which allows to to be a ‘wolf in sheep’s clothing’

The Oxford-Astrazeneca vaccine is made with a common cold virus from a chimp, known as an adenovirus.

It is genetically modified to be harmless to humans.

Researchers also tweaked the adenovirus to contain a copy of the genetic code from the SARS-CoV-2 which is responsible for making the Covid spike protein.

Spike proteins protrude from the surface of the coronavirus and latch onto receptors on human cells, hijacking the ACE2 pathway and infiltrating cells.

The spikes are also integral in how the body’s immune system recognises the pathogen and attacks it.

In the case of the vaccine, the chimp adenovirus — as well as other ingredients to stabilise the solution — is injected into a person’s arm.

Once inside the body, the harmless adenovirus infects the person’s own cells which then read the embedded virus genetic code and manufacturers spikes which sick out from their own surface.

This is the key step as the spikes imitate the coronavirus, without posing any risk of infection or disease.

As a result, the human immune system flags it as an intruder and begins attacking it, releasing white blood cells and trying to manufacture antibodies to neutralise the foreign object.

Once it does this, the immune system remembers how best to latch onto the spike protein and defeat the virus for future reference.

Then, if a person does contract the real virus, their body rapidly reacts and fights off the infection. This is immunity.

This way of fighting off viruses has been in use for more than a decade, and has been used to make vaccines to other infections, such as flu and MERS.

However, the method is slower to adapt than the other form of vaccine, which are based on mRNA, which are being made by Pfizer/BioNTech and Moderna.

Subsequently, an Oxford vaccine that can target new variants will not be ready until later this year.

The vaccine is called ChAdOx1 nCoV-19 and is given as two-doses.

The second dose is given 4-12 weeks after the first dose.

The key to a successful vaccine is ensuring the imitation spike protein it produces is as close to that of the real virus as possible.

There are several ways to do this, including the mRNA method of both Pfizer/BioNtech and Moderna and an inactivated whole virus.

But the Oxford/AstraZeneca jab uses a different technique based on a common cold virus found in chimps.

The team inactivated the ape virus and inserted a piece of the coronavirus’ genetic code into it which is responsible for the production of the critical spike protein.

The coronavirus spike protein is how the virus infects people. The nefarious protein attaches to the common ACE2 receptor on human cells and hijacks it, using it as a gateway to infect human cells.

But while the spike protein is how SARS-CoV-2 infects people, it is also how it is most easily recognised.

Once a person receives the Oxford jab, known as the ChAdOx1 nCoV-19 vaccine, their cells then get infected by the harmless modified chimp virus.

Then, the person’s own cells read the coronavirus’ genetic code and produce a replica of the spike protein on their surface.

How accurately these mimic spikes resemble those of the virus determine the robustness of a person’s immunity.

The concern for vaccine developers and academics is that new variants of coronavirus, such as those first spotted in Brazil and South Africa, have specific mutations which change the shape of the spike.

This, they believe, could lower immunity provided by vaccines as the new spike seen on variants is significantly different to that of the vaccine.

Therefore, the person who has been inoculated has antibodies which do not work on the new strain, rendering them unprotected and vulnerable to infection.

Studies and trials have found that the Oxford jab does work against the emerging strains, but not as well as it does against the original version of the disease and the Kent strain.

The jab is under scrutiny for a concerning link to blood clots in younger people MPS today said Britain’s drug regulator the MHRA must urgently finish its review into the link between the Covid vaccine and a rare brain blood clot called CVST.

Last night Oxford University halted trials of its coronavirus vaccine in children until the Medicines and Healthcare products Regulatory Agency (MHRA) concluded on its safety in younger people, with formal advice expected in as early as today.

Health watchdogs continue to probe the link between the jab and CVST, which can lead to a stroke, with the European medical regulators set to announce the conclusions of their investigation at 3pm.

Germany has already temporarily banned the vaccine for under-60s and France making the same controversial move for under-55s.