2021 on track to be the first year that surpasses pre-industrial carbon dioxide emissions by more than 50%, study reveals

This year is on track to be the first on record that surpasses pre-industrial levels of atmospheric carbon dioxide, a new study reveals.

The analysis shows carbon dioxide (CO2) has continued to build up since and is now 50 percent higher as of March 2021.

Observations at the Mauna Loa Observatory in Hawaii calculate the average was 417.14 parts per million (ppm) last month, but experts predict it will peak at 419.5ppm in May.

Records derived from ice core measurements show that the average global CO2 concentration in the atmosphere for 1750 to 1800 was around 278ppm.

This is despite a temporary reduction in global emissions last year due to the coronavirus pandemic that saw a dramatic drop due to businesses shuttered and people under some type of lockdown. 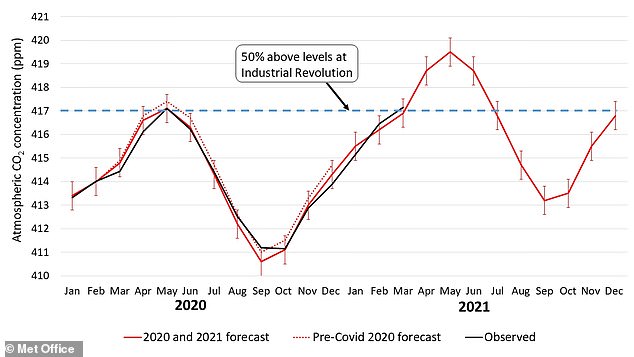 The analysis shows carbon dioxide (CO2) has continued to build up since and is now 50 percent higher as of March 2021. Observations at the Mauna Loa Observatory in Hawaii calculate the average was 417.14 parts per million (ppm) last month, but experts predict it will peak at 419.5ppm in May.

Although Earth saw a huge spike in carbon dioxide emissions during the pre-industrial era, the recent analysis suggests our modern world is much worse.

Professor Simon Lewis, from University College London, said: ‘It is easy to forget just how much and just how fast fossil fuel emissions are affecting our planet.

‘It took over 200 years to increase the amount of carbon dioxide in the atmosphere by 25%, and just 30 years to reach 50% above pre-industrial levels.

‘This dramatic change is like a human meteorite hitting Earth.’

The study was a conducted by the University of California San Diego, The Met Office and the National Oceanic and Atmospheric Administration (NOAA).

The previous record for monthly CO2 concentrations at Mauna Loa in the Scripps dataset was 417.10 ppm in May 2020, but the same amount was measure for several days in February and early March of this year.

Professor Richard Betts, head of climate impacts research at the Met, shared in a release: ‘The usual springtime upward trend will soon take concentrations above this level for the next three to four months.

‘Therefore, 2021 is expected to be the first year on record with CO2 levels more than 50 percent above pre-industrial levels for longer than a few days.’ 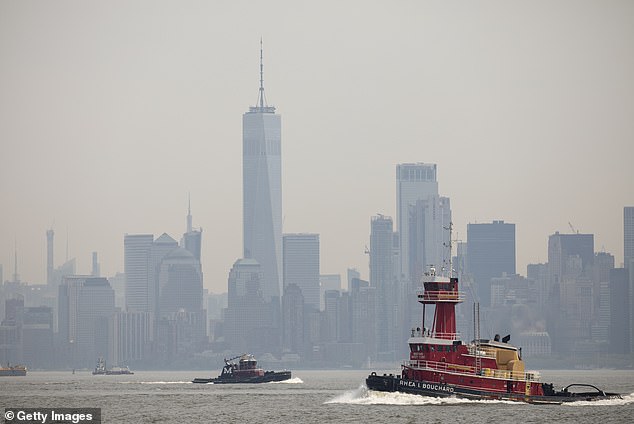 The previous record for monthly CO2 concentrations at Mauna Loa in the Scripps dataset was 417.10 ppm in May 2020, but the same amount was measure for several days in February and early March of this year 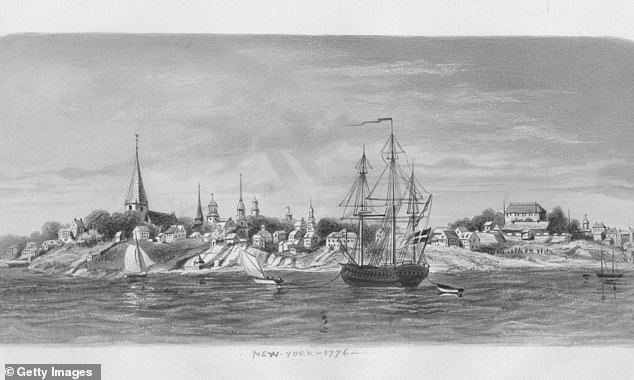 Experts said: ‘It took over 200 years to increase the amount of carbon dioxide in the atmosphere by 25%, and just 30 years to reach 50% above pre-industrial levels. ‘This dramatic change is like a human meteorite hitting Earth’ (pictured New York in the pre-industrial era)

The data was combined with ice core samples, which tell scientist about temperature, precipitation, atmospheric composition, volcanic activity, and even wind patterns.

Together, the methods showed the annual average CO2 concentration is increasing year-on-year.

This is mainly due to the burning of fossil fuels, with further contributions from deforestation.

By 2011, there was a 40 percent increase from the Industrial Revolution and then we have the most recent spike of 50 percent.

‘Emissions may have been reduced but we are still emitting lots of carbon dioxide, and so its atmospheric concentration is bound to go up – and will continue to do so until we get to somewhere near net-zero emissions.

‘Our path to net zero is obvious, challenging and necessary – and we must get on with the transition urgently,’ he said.