Not so cute after all! Baby sea stars EAT each other in unexpected case of underwater cannibalism, scientists reveal

Baby sea stars eat their siblings in what is an unexpected case of underwater cannibalism, according to scientists, who accidentally observed the behaviour.

Forbes’ sea stars are found on the East Coast of the US and as adults can reach up to 9.4 inches in length, females can produce up to 10 million eggs per year.

To grow, the juveniles must eat, and the study authors found that young sea stars often turn on each other, with the larger creatures targeting their smaller siblings. 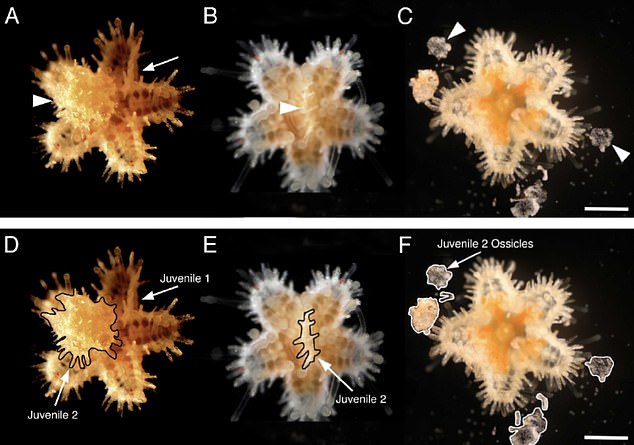 Baby sea stars eat their siblings in what is an unexpected case of underwater cannibalism, according to scientists, who accidentally observed the behaviour

DEVELOPMENT OF THE FORBES SEA STAR

The Forbes Sea Star female produces up to 10 million eggs every year.

In their larval form they look like little spaceships floating in the water.

As they grow they go through a metamorphosis into a form similar to the adult version.

Some fall to the sea floor before they are developed and are eaten by their larger siblings.

Others grow to become juvenile sea stars and settle on the floor.

At this point some will consume their slightly smaller siblings by turning their stomach inside out.

Once turned, they suck in their sibling and completely consume them, before returning to normal.

Sea stars are also known as starfish, but scientists avoid using the term as the species is not a form of fish.

Cannibalism is widespread in nature, but their discovery marks a previously unknown example of cannibalism in marine invertebrates.

Little embryos of sea stars fly through the water and during this larval stage they look like ‘weird little spaceships’, according to study author Karina Brocco French.

The weird little spaceship stage lasts around a month, Brocco French said, before they metamorphose into juveniles, settling onto the sea floor.

Jon Allen said the juveniles are essentially pinhead-sized, star-shaped versions of their parents, and it is at this stage they engage in cannibalism.

It was already known that the juvenile sea stars would eat larva from stars that had fallen to the sea floor, this is the first time they’ve been shown eating their smaller, fully formed siblings.

Allen and Brocco French recorded cannibalism among the sea stars as early as four days post-metamorphosis – transition from larval form to juvenile stage.

‘I’m convinced that if they could, they would eat each other during the little spaceship phase,’ Brocco French said. ‘But unfortunately, I don’t think they have the ability to do that until they turn into little bitty sea stars.’

Allen said the larval sea-star spaceships eat algae, but ‘when the spaceship lands, the juveniles on the bottom eat the larvae.’

When juvenile-eats-juvenile action occurs, a sea star is taking on a meal roughly the same size as itself, Brocco French explained, adding that ‘they extrude their stomachs, kind of like turning it inside out like a plastic bag.’

‘And then they sort of engulf whatever it is they’re trying to eat, and start to break it down, and then absorb the broken-down stuff.

‘So they don’t need teeth or anything. They’ve got it covered.’

A sea star has multiple stomachs and the one used to consume their siblings is known as the cardiac stomach.

‘Instead of putting their food in their mouth, they slide their stomach out of their mouth into their food,’ Allen said.

Their observations show that even the smallest differences in size can determine whether a star fish is going to be dinner or diner.

This is especially true when you consider the inevitable competition that results when a female produces five to ten million eggs each year.

Cannibalism is common in the animal kingdom, the practice has been documented in more than 1,300 species, vertebrates and invertebrates alike. 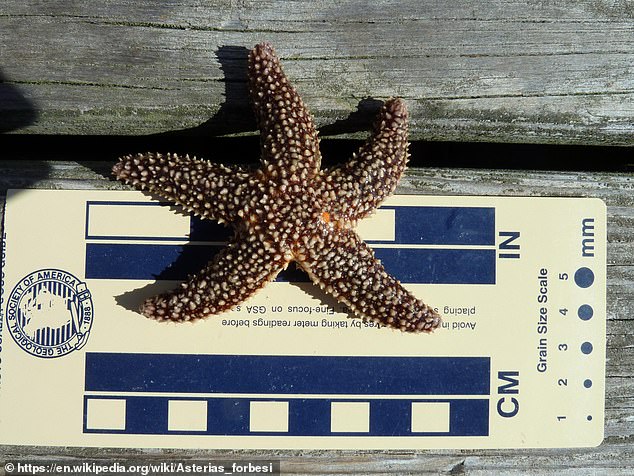 Brocco French and Allen suspect that cannibalism is even more widespread than that, likely to be common among small animals and animals in early growth stages.

Allen says he hopes the Ecology paper will represent an ‘aha! moment’ for researchers to look closely at the wide range of microscopic life.

‘We think — anthropomorphizing — that cannibalism is terrible. No one should be cannibalistic, ‘he said. ‘But in nature, ‘red in tooth and claw,’ this is something that can be favoured. So it seems to be a strategy that’s likely to be common.’

The findings were published in the journal Ecology.

The Forbes Sea Star (Asterias forbesi) is endemic to the shallow waters of the northwest Atlantic Ocean and the Caribbean Sea.

It usually has five arms, although can have four or six, covered in projections on the upper side that give it a rough feel.

Some of the projections are tiny pincers allowing the creature to grab on to things around them.

They grow to about six inches in diameter, with an arm length of about two point four inches.

Females can produce up to 10 million eggs in a single spawn, resulting in spaceship like larvae floating in the water.

They undergo metamorphosis before landing and settling on the sea floor, where as juveniles they have been shown to engage in cannabalism.