At first glance at this image, you’d be forgiven for mistaking it as a still from the latest science fiction blockbuster.

But the photo is very much real, and was snapped by NASA’s Curiosity Mars rover this week.

The selfie shows the rover alongside a rock formation dubbed ‘Mont Mercou’, a nickname taken from a mountain in France.

And while the photo is impressive on its own, it was actually taken to celebrate Curiosity’s 30th sample to date, after the rover drilled a hole at a nearby rock sample nicknamed ‘Nontron.’ 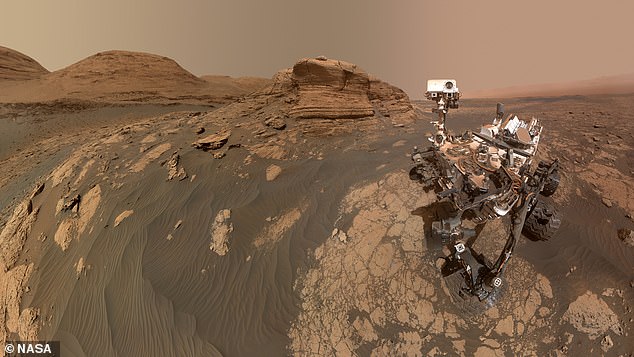 The selfie shows the rover alongside a rock formation dubbed ‘Mont Mercou’, a nickname taken from a mountain in France

THREE MISSIONS TO MARS IN 2021: US, UAE AND CHINA AT OR ON THE RED PLANET

So far 2021 has been the ‘year of Mars’ with three spaceships from Earth arriving at the Red Planet.

The first visitor from Earth to arrive was also a first for the Arab world – the United Arab Emirates ‘Hope’ probe.

This spaceship is going to monitor the weather on Mars over a full year.

The second ship was from China – Tianwen-1 will orbit Mars until May when it will deploy a rover.

This will make China only the second country after the US to land a rover on Mars if it is succesful.

NASA’s Perseverance was the last of the three to arrive in Martian orbit, but the first to land on the Red Planet.

Mars’ Mont Mercou is named after a mountain in France, located near the village of Nontron in the southeast of the country.

NASA explained: ‘The team chose Nontron-related nicknames for this part of the Red Planet because Mars orbiters detected nontronite, a type of clay mineral found close to Nontron, in the region.

‘Surface missions assign nicknames to landmarks to provide the mission’s team members a common way to refer to rocks, soils, and other geologic features of interest.’

After Curiosity took its 30th sample, it powderised the rock, before trickling it into instruments inside the rover, allowing scientists to get a better understanding of the rock’s composition.

‘This area is at the transition between the ‘clay-bearing unit’ Curiosity is departing and the ‘sulfate-bearing unit’ that’s ahead on Mount Sharp, the 3-mile-tall (5-kilometer-tall) mountain that the rover has been rolling up since 2014,’ NASA said.

‘Scientists have long thought this transition might reveal what happened to Mars as it became the desert planet we see today.’

The selfie is composed of 60 images taken by Curiosity’s Hand Lens Imager on March 26 – the 3,070th day of the mission.

These 60 images were combined with 11 images taken by Curiosity’s Mastcam of the rover on March 16.

Curiosity also snapped a pair of panoramas using its Mastcam on March 4.

NASA explained: ‘By shooting one panorama from about 130 feet (40 meters) away from the outcrop, then rolling to the side and shooting another from the same distance, the rover created a stereoscopic effect similar to those seen in 3D viewfinders.

‘Studying the outcrop from more than one angle helps scientists get a better idea of the 3D geometry of Mount Mercou’s sedimentary layers.’

Curiosity is the largest and most capable rover ever sent to Mars, and is part of NASA’s Mars Science Laboratory mission.

The rover’s key mission is to unravel they mystery of whether or not Mars ever haad the right conditions to support life.

NASA added: ‘Early in its mission, Curiosity’s scientific tools found chemical and mineral evidence of past habitable environments on Mars.

‘It continues to explore the rock record from a time when Mars could have been home to microbial life.’

The Mars Curiosity rover was initially launched from Cape Canaveral, an American Air Force station in Florida on November 26, 2011.

It was launched on the Mars Science Laboratory (MSL) spacecraft and the rover constituted 23 per cent of the mass of the total mission.

The Mars curiosity rover was initially intended to be a two-year mission to gather information to help answer if the planet could support life, has liquid water, study the climate and the geology of Mars an has since been active for more than 2,000  days

The rover was initially intended to be a two-year mission to gather information to help answer if the planet could support life, has liquid water, study the climate and the geology of Mars.

Due to its success, the mission has been extended indefinitely and has now been active for over 2,000 days.

The rover has several scientific instruments on board, including the mastcam which consists of two cameras and can take high-resolution images and videos in real colour.

So far on the journey of the car-sized robot it has encountered an ancient streambed where liquid water used to flow, not long after it also discovered that billions of years ago, a nearby area known as Yellowknife Bay was part of a lake that could have supported microbial life.