One day into an expedition to the mountains of northern Russia, Yuri Yudin, an avid skier and student at the Ural Polytechnic Institute, felt a pain in his lower back. His sciatic nerve had flared up, and it forced him to leave his group and turn around.

The decision saved his life.

The nine remaining members of the expedition continued hiking and cross-country skiing toward a mountain called Gora Otorten. Then on February 1, 1959, five days after Yudin left, they all died mysteriously.

Rescuers found the group’s large tent, which had been cut open from the inside, nearly four weeks later. The bodies were discovered up to a mile away, down the mountain, some clad in only socks and underwear. Something had caused the hikers to flee shoeless from their tent in temperatures of minus 13 degrees Fahrenheit (minus 25 degrees Celsius).

The “Dyatlov Pass Incident” — named after Igor Dyatlov, the group’s leader — became one of Russia’s most infamous cold cases. The hikers’ immediate causes of death were eventually determined: Six died of hypothermia, and three from blunt force trauma to their chest and head. But the cause of the disaster remained a mystery.

Now, more than 60 years later, a scientific analysis offers an explanation for what happened to Dyatlov’s crew. A study published last month suggests that a small but deadly slab avalanche occurred while the hikers were sleeping. Unlike the snow avalanches typically depicted in movies, a slab avalanche is when a large block of ice slides down a slope. Such a slab crushed part of the hikers’ tent, injuring three of them and forcing the group to flee. 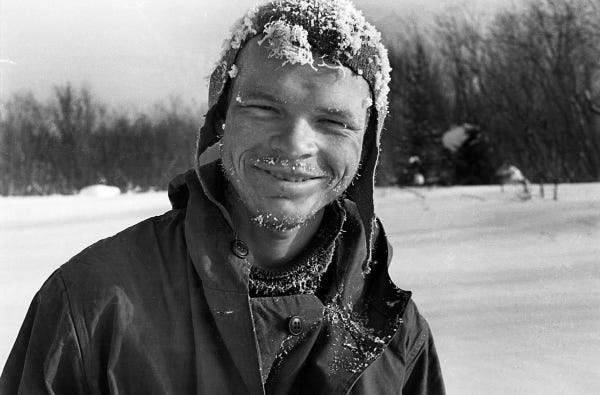 The hikers had set up camp on the slopes of Kholat Saykhl — which translates to “Dead Mountain” in the local Mansi language. They were 12 miles south of their intended destination in the northern Ural mountains.

A photograph recovered from a camera found around the neck of one of the hikers suggests the group pitched camp and ate dinner together on the evening of February 1, 1959. Forensic evidence supports that timeline.

After the bodies were found, a three-month government investigation determined that a “compelling natural force” had caused the hikers’ deaths, but it didn’t explain what that force was. Their families were left without answers.

Since then, conspiracy theories have run the gamut from a Yeti attack to a run-in with aliens. 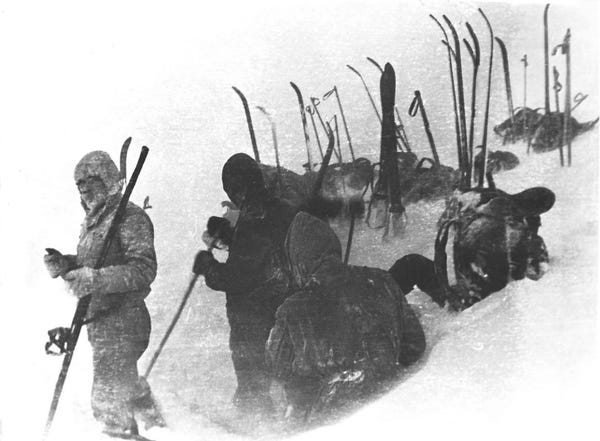 While an avalanche seems like an obvious explanation, it was considered unlikely for years, according to Alexander Puzrin, who co-authored the new study.

“There were several issues with that theory,” Puzrin, a geotechnical engineer from the Swiss Federal Institute of Technology in Zurich, told Insider.

For one, the rescue team didn’t find any evidence that an avalanche had occurred. It hadn’t snowed that night, which can kickstart an avalanche. More importantly, the angle of the slope on which the hikers pitched their tent wasn’t steep enough for a snow-slide. Avalanches typically happen on slopes of at least 30 degrees.

The hikers’ injuries, too, were uncharacteristic of typical avalanche victims. 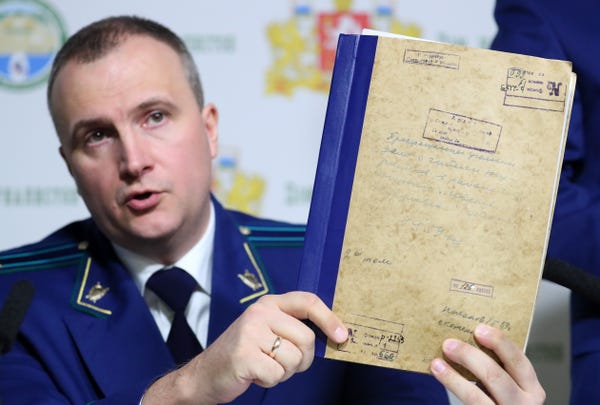 But none of the investigators offered details.

“They didn’t release the data,” Johan Gaume, Puzrin’s co-author, told Insider. Gaume leads the Snow and Avalanche Simulation Laboratory at the Swiss Federal Institute of Technology Lausanne. “If you say was an avalanche to the relatives without that, how can they trust you?”

By calculating the time between sunset on February 1 and the moment when several of the hikers’ watches stopped, the study authors determined that the group didn’t flee their tent until between 9.5 and 13.5 hours after they’d pitched it, long after they’d eaten and gone to sleep.

The researchers worked out a theory: The hikers had cut into the mountain to create a flat surface for their tent (as shown below). But the slope where they were camping concealed a bit of terrain that was steeper than it seemed, which would enable an overlying slab to slough off under the right conditions. 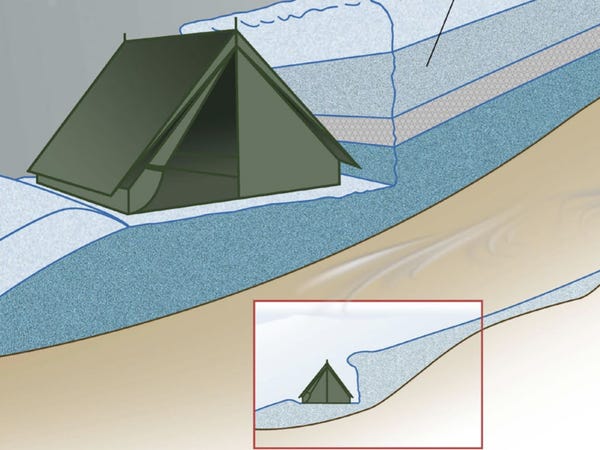 Puzrin’s mathematical models suggest that if enough snow had accumulated on the slope above the tent, a slab could indeed have broken off and slid down. Given that weather records showed it hadn’t snowed that night, the extra snow must have come from strong katabatic winds, the researchers determined — gusts that push air down a slope. These winds likely blew snow down the mountain, where it accumulated on the slope above the tent.

“At a certain point, a crack could have formed and propagated, causing the snow slab to release,” Puzrin said in a press release. Picture a chunk of snow sliding off a gable roof to the ground below.

This wasn’t the hikers’ fault, Puzrin noted: It was the product of compounding coincidences. Had the hikers chiseled away at the mountain slope in a different spot, or had the wind been weaker, there wouldn’t have been an avalanche.

“If they didn’t make the cut, nothing would have happened,” Puzrin said. “But if not for the strong wind or special topography, it wouldn’t have failed and they would’ve woken up and become grandmothers and grandfathers.” 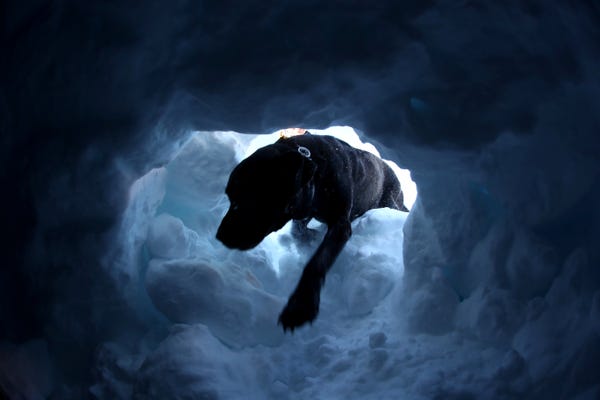 The other counterargument to the avalanche hypothesis was the hikers’ injuries. Broken ribs and fractured skulls aren’t usual outcomes for people caught in avalanches. Typically, avalanche victims asphyxiate to death.

But it’s a different story “if you’re sleeping on the floor of the tent on top of your skis and a 300-kilogram [660-pound] block of snow lands on you,” Gaume said.

To model what injuries from a slab avalanche would look like, Gaume and Puzrin borrowed data from the automotive industry. In the 1970s, GM took 100 cadavers and hit them with various blocks of different masses at different velocities to model car crashes. The results showed what a prone body would look like if it had been lying on a solid surface then hit with a 16-foot-long, heavy slab. Those injuries would be similar to the ones on the dead hikers, it turned out.

“The injuries would be serious, but not immediately fatal,” Gaume said. That explains how all nine expedition members were able to leave the tent.

A ‘banal and normal’ answer to a decades-long cold case 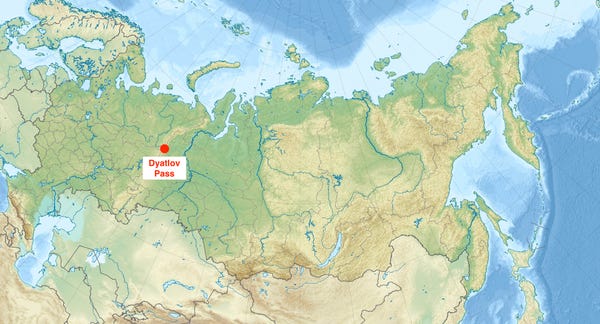 The Dyatlov Pass mystery became a part of Russian folklore, Puzrin said. Just last year, a series called Pereval Dyatlova rekindled public interest. The show went through various conspiracy theories, including supernatural forces and a romantic spat between the hikers that turned violent. The last episode was about a slab avalanche akin to the one described in the new study.

“People don’t like something as banal or normal as an avalanche to explain something like this with so many conspiracy theories around it,” Gaume said.

Puzrin added: “We were concerned the reaction in Russia would be ‘thank you for nothing.'” 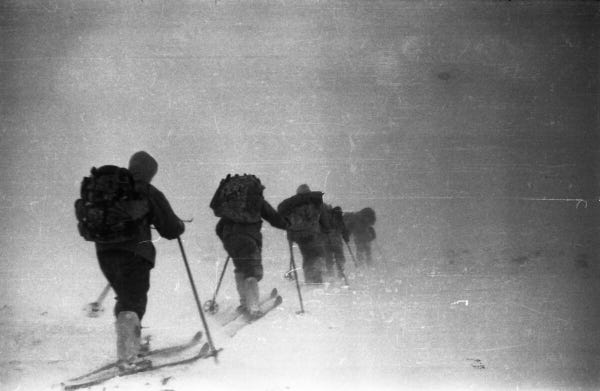 But their analysis still doesn’t address every oddity of the incident. Some of the dead hikers’ clothes had traces of radioactivity, and another group of hikers reported seeing orange spheres in the sky above Dead Mountain on the night Dyatlov’s crew died. (This fueled speculation that UFOs were involved.)

What’s more, two of the bodies were missing eyes and one had no tongue. According to Gaume, however, “one could easily imagine” that during the 26 days before rescuers found the bodies, wildlife gnawed on the remains.

The hikers’ barely clad state, Gaume added, could be attributed to the fact that they panicked.

“Maybe they were afraid of a second avalanche, and didn’t take time to grab their clothes.”