Unravelling the mystery of how humans began walking upright: Analysis of hominin Ardi’s hand suggests our ancient ancestors were ‘swinging from trees like chimps’ until at least 4.4 million years ago

Ancestors of modern humans who lived 4.4 million years ago were well-suited to swinging in trees and a life in the branches.

Hand bones of Ardi, a member of the ancient human relative species Ardipithecus ramidus, were compared to modern primates and other extinct human ancestors.

It reveals they are ape-like in structure and more suited to moving around on their knuckles and living in trees than walking on two legs.

The study also sheds light on the evolutionary path from the last common ancestor of humans, chimps and bonobos through to modern people. 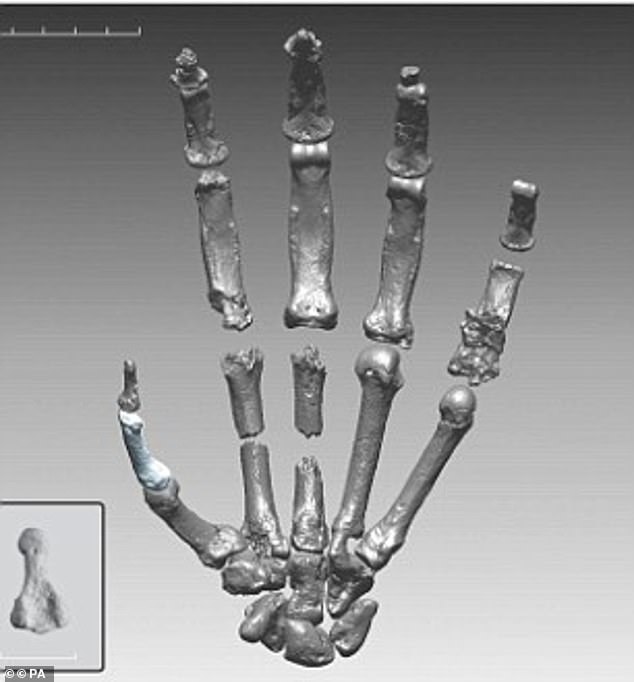 Hand bones of Ardi (pictured), a member of the ancient human relative species Ardipithecus ramidus, were compared to modern primates and other extinct human ancestors

It is thought the chimp-like hands of Ardi, which were useful for living in trees, are similar to the hands of an ancient primate which lived seven million years ago

It is thought the chimp-like hands of Ardi are similar to those of an ancient primate which lived seven million years ago.

This primate would later diverge into two lineages — one would go on to create humans and the other would lead to chimps and bonobos.

As no fossil evidence of this common ancestor has ever been found, exactly what it looked like and how it lived is up for debate.

Seven million years ago – Primate exists which lives in the trees and swings. It cannot walk on two legs.

This species diverged into two lineages, one would produce humans, the other would give rise to bonobos and chimps.

4.4 million years ago – Ardipithecus ramidus exists. The fossil Ardi is one of this species.

It has hands similar to its ancestor which are suited to life in the trees.

Its feet also had a grasping toe, which helped with branch life.

3.9-3 million years ago – Lucy, a member of the species Australopithecus afarensis, is alive.

It is believed she is a descendent of Ardi and she has a pelvis which indicates she walked upright.

She is missing the ‘grasping toe’ and had hands which were more dexterous than Ardi and had ‘the ability to use human-like precision grips’.

The million years or so between Lucy and Ardi has been described as a ‘big evolutionary jump’.

Around 2.8 million years ago – First Homo species evolve from Australopithecus

This gave rise to the modern chimp and bonobo.

400,000 years ago – Neanderthals first begin to appear and spread across Europe and Asia

Around 40,000 years ago – Neanderthals go extinct

Scientists have long bickered over this topic, with some saying it was monkey-like and some indicating it is more closely resembled an ape, similar to a chimp.

Now, research from Texas A&M University finds the latter is the most likely to be true.

It showed Ardi’s hands had ‘morphometric affinities’ with great apes and features similar to those of chimps and bonobos.

The distinctly non-human looking hands of Ardi were suited to walking on knuckles, and not walking on two legs, the researchers say.

However, analysis of the famed skeleton Lucy, a member of the species Australopithecus afarensis and a descendant of Ardi who lived around three million years ago, shows a change in hand structure.

Lucy is well-preserved and since her discovery in the 1970s has helped experts piece together modicombs of information on human evolution.

The tiny bones in her hand are different in shape to Ardi, with similarities to various other hominin groups.

‘Overall, the hand morphology of Au. afarensis is consistent with the ability to use human-like precision grips, but it might have limited its ability to make advanced stone tools,’ the researchers write in their study, published in Science Advances.

Researchers say Ardi and Lucy ‘fall along an evolutionary trajectory’ and the physiological difference between Lucy and her ancestor is the key to understanding how hominins began walking upright.

Dr Thomas Prang, lead author of the study, says in the one million years or so between Ardi and Lucy there was a ‘big evolutionary jump’.

During this period hominins evolved adaptations which made them much more human-like and allowed for upright walking, he says.

This era is also when hominins first started making and using stone tools, with evidence of cut marks on animal fossils.

Dr Prang previously led a similar study on the feet on Ardi and determined her species probably split their time between walking on their knuckles and swinging in the trees, similar to chimps today.

But this finding has been contested, with other research claiming Ardi may have been adept at walking upright.

However, Lucy is widely accepted to have walked on two legs due to the shape and structure of her pelvis.

Dr Prang believes the evolution of the hands and feet of early hominins likely occurred in tandem.

This mysterious one million year window also saw hominins lose the grasping big toe, another indicator this was when our ancestors ditched life in the trees and committed to a two-legged, land-based existence.