A rare cactus from the Amazon rainforest is set to bloom in a British Garden for the first time ever.

The moonflower cactus, officially known as Selenicereus wittii, is unlike most cacti as it lives in the flood-prone Amazon basin and weaves itself around other trees with its pad-like leaves.

It also has a rapid flowering process which lasts for less than 12 hours and occurs overnight.

Botanists at the Cambridge University Botanic Garden spotted a flowerbud of the rare plant last week and say it is likely to bloom in the next few days.

Once the bud opens and its white flower emerges, there will be a honeysuckle-like scent produced which is said to be similar to the perfume of popstar Rihanna.

This aroma will last for just a couple of hours before turning rancid as the flower wilts, experts believe. 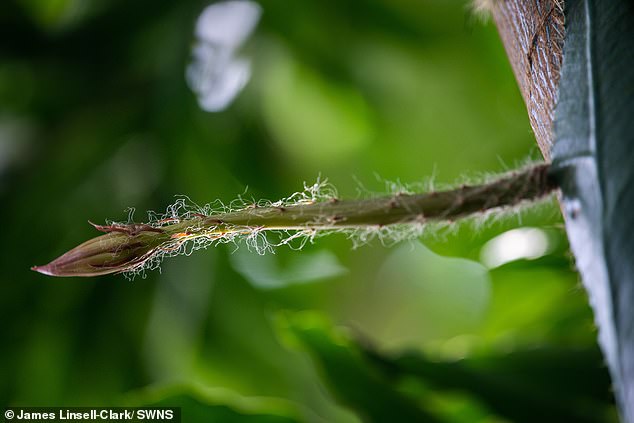 The moonflower cactus, officially known as Selenicereus wittii, is unlike most cacti as it lives in the flood-prone Amazon basin and weaves itself around other trees with its pad-like leaves 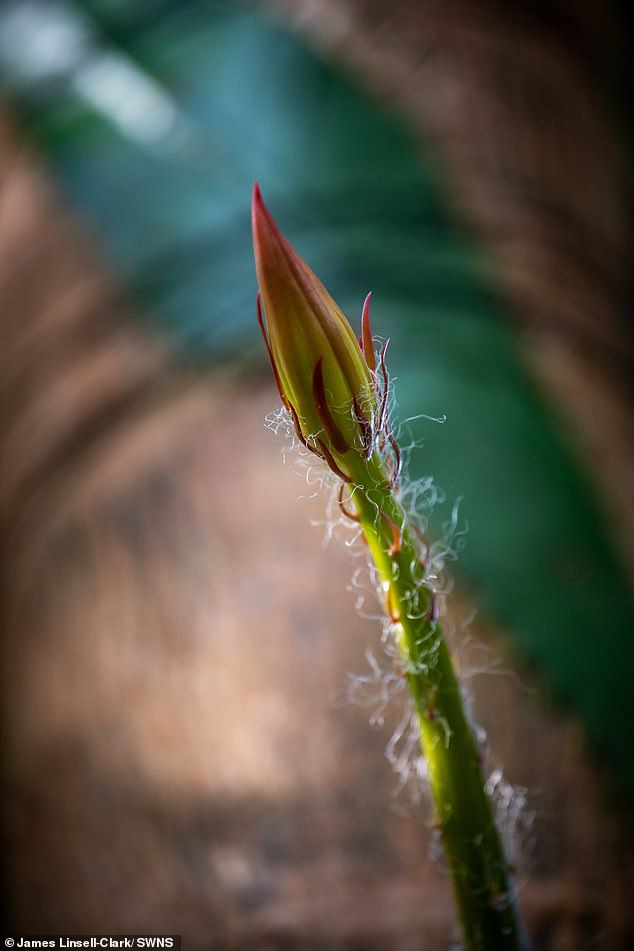 Because the plant only blooms at night and the greenhouses are currently closed, the team has set up a live stream to allow people to view the process.

The moonflower cactus is only found in the wild high above the waterline of the Amazon basins in western Brazil.

It reproduces by producing stems which shoot out from the tree it is using as an anchor and producing buds.

In the wild, the flower blooms when it stem is between 25 and 27cm long. This morning, the Cambridge team measured the stem at 25cm long.

The previous record for a plant of the species grown in a garden and not in the wild was around 20cm, which was achieved in Germany.

It is expected to bloom at sunset as this is when the plant’s two pollinators, a pair of hawkmoth species, are active in the wild.

Because of the long stem of the flower only Cocytius cruentus and Amphimoena walkeri moths can pollinate the flower in the wild because of their extremely long tongues, or proboscises.

However, the Cambridge team do not have any of these moths to hand so will instead manually pollinate the plant with a paintbrush.

Even though it smells like rotting flesh, the so-called ‘Corpse Flower’ is a huge draw at botanical gardens all over the world.

In addition to its shockingly putrid scent, it can grow over ten feet tall and only blooms every few years—and even then just for a few days.

But the flower, which originates in Sumatra, is difficult to cultivate and botanists are worried the small number of viable specimens will lead to inbreeding.

The 500 or so corpse flowers growing outside Indonesia are all closely related, making them more vulnerable to disease and other issues.

‘When you don’t have a lot of genetic diversity, you can get what’s called inbreeding depression because you’re basically breeding closely related plants with each other,’ Susan Pell, deputy director of the United States Botanic Garden told The New York Times in December.

That can result in fewer viable seeds, weaker seedlings and an overall decline in robustness and diversity.

Their numbers are declining at home, too: The International Union for Conservation of Nature (IUCN) listed Amorphophallus titanum as endangered in 2018 and, due to logging and agricultural deforestation, it’s believed there are less than 1,000 in the wild.

White petals will emerge and a sweet scent will be emitted before turning rank and the flowers will wilt before the sun rises in the morning.

Botanists in Cambridge do not exactly know what the ‘off’ odour smells like as the plant has never bloomed in the UK, but say it is unlikely to resemble rotting flesh in the same was as Amorphophallus titanum and Rafflesia arnoldii.

‘I’m so excited to see and share this most unusual flowering. It’s very rare to have this plant in our collection and we believe this is the first time the Moonflower has flowered in the UK.

‘I noticed the flattened stems, or pads, which swirl around the trunk of our Water Chestnut had sent out a flowerbud in late November – which was a lucky spot as it’s almost 12 feet up in the air and could have so easily been missed!

‘But it has only recently increased radically in size which means a flowering is imminent.’

If the botanists successfully pollinate the plants during this short-lived blooming event, the seeds it produces will eventually fall.

In the wild they would fall into the floodwater below where they would float away and potentially settle at the base of another tree, allowing the offspring to thrive.

However, in Cambridge they hope to harvest the seeds and share them with other botanic gardens.

This is the first time the plant, which was brought to Cambridge in 2015 from a cutting of a plant at Bonn Botanic Garden in Germany, will bloom.

‘I’m so intrigued and excited to experience it flower! We acquired a small pad from Bonn Botanic Garden in 2015. I attached it to our Water Chestnut tree in our Tropical House and it’s since grown around the tree and now one of the stems has decided to send out a flower bud,’ Mr Summers adds.

It is hoped that now the plant has matured and bloomed for the first time that it will continue to do some once every year.