All the world’s Covid virus would fit in half a COKE CAN: Total volume of coronavirus infecting more than 106million people is just 160ml

Every single cell of SARS-CoV-2, the virus causing Covid-19, would fit into one can of Coke, a British mathematician has calculated.

Covid-19 has so far infected at least 106million people worldwide and killed more than 2.3 million of these cases.

But the virus itself is tiny, measuring just 100 nanometers, or 100 billionths of a meter, across — 1,000 times thinner than a human hair.

Bath University maths lecturer Dr Kit Yates crunched the numbers and came to the conclusion that if all the coronavirus cells were piled on top of one another, the pile would be equivalent to 160ml of liquid. One can of pop in the UK contains 330ml. 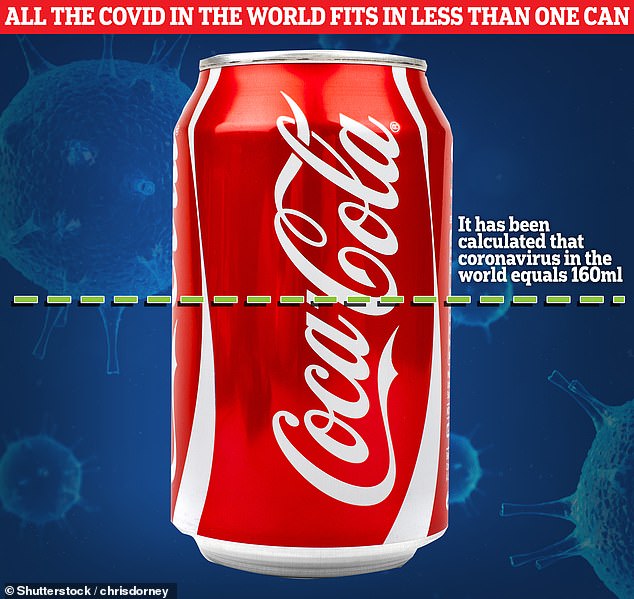 Every single cell of SARS-CoV-2, the virus causing Covid-19, would fit into one can of Coke, a British mathematician has calculated

Dr Yates has previously penned a book, titled The Maths of Life and Death, which is centred around quirky mathematical equations to unusual questions.

BBC Radio 4 tasked him with working out how many coronavirus particles there are in the world and how big a space this took up.

He began with the known quantities: how big the virus is; how many people have the virus; and how much of the virus each person has, at any one point.

It is widely accepted the SARS-CoV-2 virus is fairly spherical and has a diameter of between 80 and 120nm.

This peak comes six days after a person gets infected, and forms a traditional bell curve with slopes on either side of the peak, with one side slightly shallower than the other as it takes more than a week for the body to clear the virus out of the system.

The third part of the equation is how many people are infected with the virus at any one time.

‘According to stats website Our World in Data, half a million people are testing positive for COVID every day,’ Dr Yates writes in an article for The Conversation.

‘Yet we know that many people will not be included in this count because they are asymptomatic or choose not to get tested – or because widespread testing is not readily available in their country.

A coronavirus related to the one causing the global pandemic has been discovered in the blood of five bats living in Thailand.

SARS-CoV-2, the virus which causes Covid-19, shares 91.5 per cent of its genetic code with that of the newly-identified virus, called RacCS203.

The virus is thought to be unable to infect people as it can not bind to the ACE2 receptor on human cells, Covid-19’s gateway into the body.

However, antibodies circulating in the blood of infected bats and pangolins were found to be effective at neutralising the SARS-CoV-2 virus.

The authors instead think coronaviruses only evolve the ability to infect human cells after first being passed into an intermediate host, such as a pangolin.

Here, it mutates and changes shape slightly which gives it the ACE2-binding facility, the authors theorise.

These findings align with yesterday’s announcement from the World Health Organization that the pandemic likely emerged naturally and the coronavirus was not released from a laboratory.

‘Using statistical and epidemiological modelling, The Institute for Health Metrics and Evaluations has estimated that the true number of people infected each day is more like 3 million.’

He assumed this figure was constant, allowing him to estimate how many people had been infected over the last few days, and then multiplied it with the amount of virus a single person is infected with.

‘We find that there are roughly two quintillion (2×10¹⁸ or two billion billion) virus particles in the world at any one time,’ Dr Yates says.

‘This sounds like a really big number, and it is. It is roughly the same as the number of grains of sand on the planet.’

He then used a simple mathematical equation which should be familiar to all GCSE maths students to calculate the volume of sphere, which is 4π r³/3

For all two quintillion cells present on Earth at the moment, this equates to a total volume of 120ml.

However, the mathematician then accounted for the fact that when spheres are stacked on top of one another, such as a pyramid of oranges or in a ballpit, there is empty space between each object.

This equation to calculate maximum packing density is less well-known (π/3√2) but revealed 26 per cent of the stack of coronavirus particles would be air.

When including this in the final calculation, a stack of every single Covid-19 particle in the world would be just 160ml in size, less than half a can of Coke.

Dr Yates did recognise that the calculations are based on several assumptions and there is likely to be some variation. and that the 160ml figure is ‘by no means definitive’.