‘If you’re reading this…’:Hidden message in White House website invites coders to apply for a job with the US Digital Service’s elite IT squad

The Biden administration has put a secret ‘help wanted’ sign for crack computer coders on the revamped White House website.

Shortly after Wednesday’s inauguration, a hidden section of HTML code was added to Whitehouse.gov, inviting applicants to apply to work for the United States Digital Service (USDS), an elite non-partisan technology unit in the Executive Office of the President.

‘If you’re reading this, we need your help building back better,’ the message reads, along with a link to usds.gov/apply.

President Barack Obama launched the USDS in 2014 to recruit technology experts to help modernize government services for the 21st century. 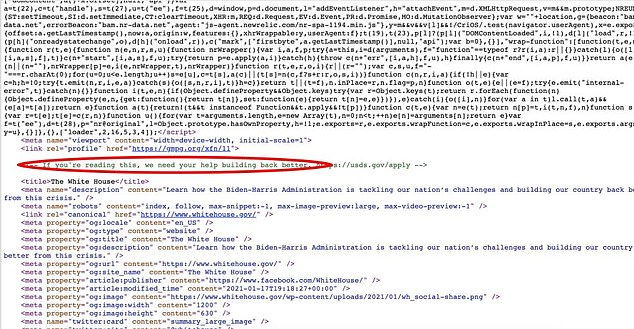 A message hidden in the HTML of the White House website invites savvy tech professionals to apply for a job with the U.S. Digital Service, an elite non-partisan squad tasked with modernizing government services

The message appears in the site’s comment tags, which aren’t visible in a browser but can be seen by developers going through a site’s backend.

The linked-to application site at USDS doesn’t list a specific job title, just space for visitors to upload their resume and credentials.

The approach seems to have worked: Within a day of the cryptic message being added, the agency reported its received a ‘high volume of applications.’

‘The U.S. Digital Service is excited to report that we’ve recently received a large number of applications,’ it posted. ‘We’re reviewing them as quickly as we can, and will respond shortly. We thank you for your patience!’

On Inauguration Day, Whitehouse.gov was also updated with a Spanish-language translation, accessibility features and an option for site visitors to choose their preferred pronouns

Former White House Chief Information Officer Steve VanRoekel described the USDS as a team of ‘our country’s brightest digital talent … charged with removing barriers to exceptional government service delivery and remaking the digital experiences that citizens and businesses have with their government,’ the Washington Post reported.

The department advises a wide variety of government agencies on information technology, including the Departments of Education, Defense, Health and Human Services and Homeland Security and the Small Business Administration.

It streamlines the appeals process for veterans seeking disability compensation, taking a huge bite out of the 450,000 pending appeals.

The USDS also helped to modernize the immigration process, allowing immigrants to file and check the status of their application online.

Employees typically join the Digital Service for a year or two, with a maximum four-year term.

The USDS was first led by former Google engineer Mikey Dickerson, who helped salvage HealthCare.gov after its disastrous launch in 2013 and  is now helmed by another Google alum, Matt Cutts.

President Biden’s team has made several other significant changes to the White House website. 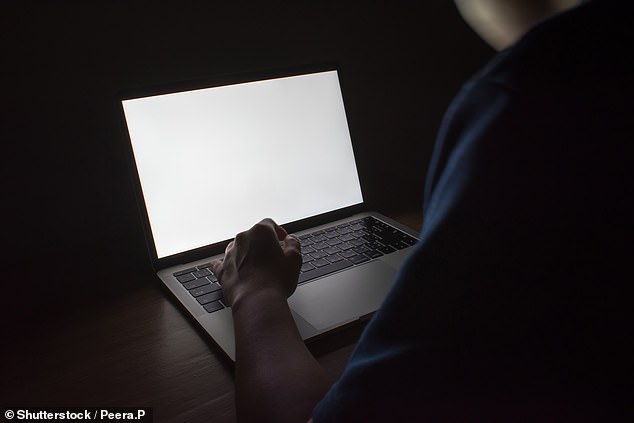 The message appears in the site’s comment tags, which aren’t visible in a browser but can be seen by developers going through a site’s backend. The linked-to application site at USDS doesn’t list a specific job title, just space for visitors to upload their resume and credentials

‘This commitment to accessibility for all begins with this site and our efforts to ensure all functionality and all content is accessible to all Americans,’ reads a statement on the site.

It indicates the administration is working toward complying with the latest Web Content Accessibility guidelines.

‘These guidelines not only help make web content accessible to users with sensory, cognitive and mobility disabilities, but ultimately to all users, regardless of ability’

Users can also select ‘other,’ and write in their preferred pronouns, or indicate that they ‘prefer not to share’ their pronouns.

Additional prefix options, including ‘Mx.’ and ‘Ms.’ have been added, as well.

A full Spanish-language translation of the site is now available by clicking ‘Español’ on the upper right of the navigation bat.

The Trump administration removed the site’s Spanish-language translation in 2017.

It had promised to restore it but, NBC News reported, only an early set of coronavirus guidelines were added in March, and only after complaints by Latino activists.