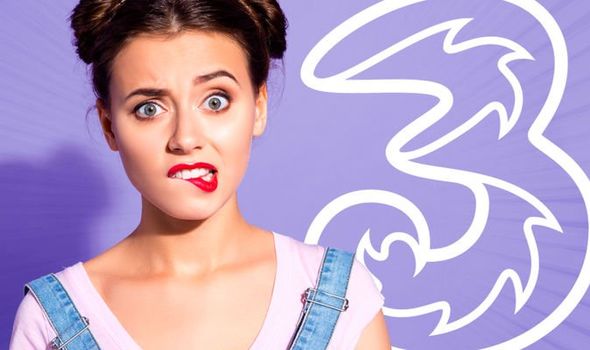 Three has confirmed a price rise for all Pay As You Go customers, with text messages, calls and mobile data usage all set to cost significantly more from February 16, 2021. According to data released last year from research firm Mintel, around 31 percent of mobile phone owners are still on are on Pay As You Go, with those aged between their mid-50s and mid-70s more likely to use these contract-free options. SIM-only, which includes a set allowance of text messages, call minutes, and mobile data, have become increasingly popular in recent years – accounting for 29 percent of customers, Mintel claims.

Those who still use a Pay As You Go SIM from Three will need to prepare themselves to pay significantly more to keep in touch with friends, relatives and colleagues. As it stands, Three charges a standard rate of 3p per minute for calls to UK landlines, mobile numbers from any network, and Three’s voicemail service. However, this is set to triple next month, with Three planning to charge 10p per minute.

And don’t think relying on text messages over calls will help your skirt the new charges.

Three will increase the cost of sending a single SMS from 2p to 10p. Similarly, Three currently charges 1p for 1MB of 3G, 4G or 5G data, which is due to increase to 5p in mid-February 2021. Worse still, it seems the free 150MB allowance that Three previously bestowed on all customers when they topped up a Pay As You Go SIM has been ditched in the changes too. For context, the iTunes Store requires around 8MB to download a single four-minute song. A group video call on WhatsApp that lasts around 30 minutes will take around 150MB.

Under the new changes, customers will go from being able to send 250 text messages with a £5 top-up – down to just 50.

On a newly published webpage, Three clarifies that the changes are not linked to the UK’s departure from the European Union, which took place on January 1, 2021. It states: “From 16th February 2021 some of our standard Pay As You Go rates in the UK will change. If you’re activating a new Pay As You Go account after this date, the new pricing will already be in place. Some of our international roaming rates are also increasing. This is to keep them in line with domestic standard rates, and not a result of Brexit.”

Calls, texts and mobile data will increase at the same rate as the domestic charges when travelling in the European Union, or other countries in Three’s “Go Roam” scheme, which allows customers to continue to use the same allowances without incurring any extra charges. When travelling outside of these countries, Three Pay As You Go customers will now face charges of 35p per text message and 5p for 1MB of data.

Of course, one simple way to avoid these price increases is to switch to a SIM-only plan. Three has some of the most competitive SIM-only plans on the market, offering phone owners 1GB of mobile data, as well as unlimited text messages and calls for £6 a month. Although, it’s worth noting that this comes with a 12-month minimum contract, something you don’t have to worry about with Pay As You Go.