Airbus has revealed its designs for self-contained hydrogen fuel cell pods that attach to the underside of aeroplane wings.

Each so-called pod contains a propeller and all the fuel, motors, cooling and engineering needed to provide thrust on long-range flights.

The units are designed to be detachable, so they can can be clipped on and off after a flight to speed up any maintenance that may be required.

Airbus hopes that the pods could could revolutionise air travel and usher in a new era of zero-emission flights. 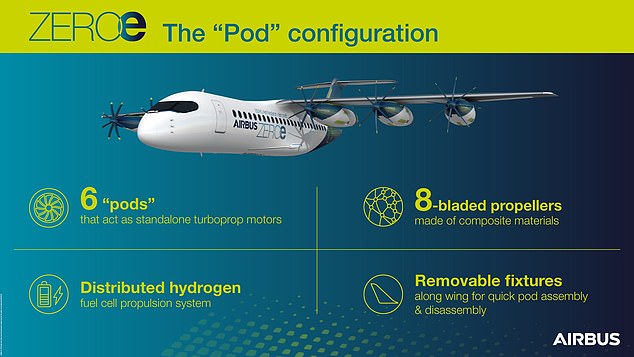 Each so-called pod contains the propeller and all the fuel, motors, cooling and engineering need to provide thrust 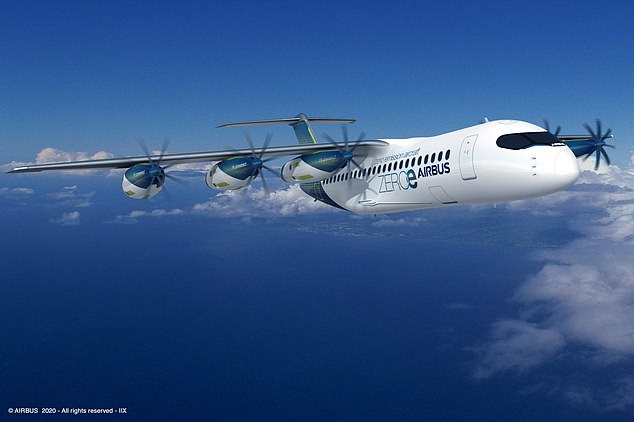 In the design, three hydrogen fuel cell pods are attached to the underside of each of the aircraft’s wings.

Hydrogen and air are stored inside each individual pod and channelled to the fuel cell, where they combine to generate electric current.

Hydrogen has promise as an environmentally-friendly fuel because the gas can be combined with oxygen to make energy and the only waste product is water.

This current powers the electric motor, causing the motor shaft to rotate and turning the eight-bladed propeller.

The propellers are shaped to provide added thrust during the takeoff and climb-out phases of flight, according to Airbus.

The ‘pod’ configuration is just one of several options that Airbus engineers are considering in their pursuit of a low-carbon alternative to the current high-pollution business model of air travel.

‘This “pod” configuration is a great starting point to nurture further inquiry into how we can scale up hydrogen technology to commercial aircraft,’ said Glenn Llewellyn, VP of Zero-Emission Aircraft.

‘This is one option, but many more will be conceptualised before we make a final selection, a decision that is expected by 2025.’

‘This ‘pod’ configuration is a great starting point to nurture further inquiry into how we can scale up hydrogen technology to commercial aircraft,’ Glenn Llewellyn, VP of Zero-Emission Aircraft, adds.

‘This is one option, but many more will be conceptualised before we make a final selection, a decision that is expected by 2025.’ 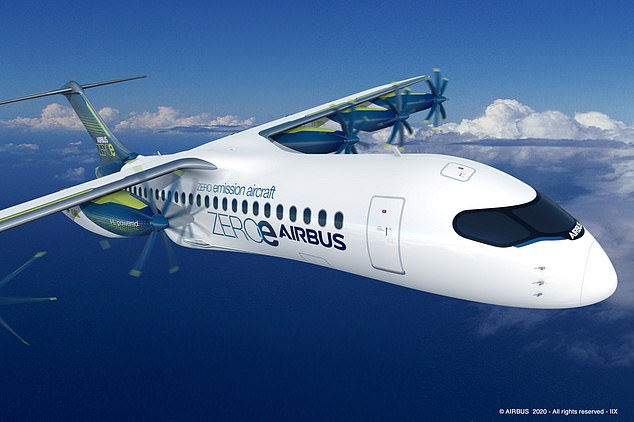 Hydrogen and air will be stored inside each individual pod and channelled to the fuel cells where they will combine and create electricity. This energy will be then shunted to the eight-blade propellers, which form part of the pod, and allow it to spin, generating enough force to power the plane

Previous research has found flying is responsible for about 3.5 per cent of humanity’s contribution to climate change.

Around two-thirds originates from contrails and other non-CO2 emissions, and vast amounts of research is looking at alternative fuels, reducing emissions and increasing efficiency.

In September, Airbus unveiled plans for a fleet of zero-emissions planes which are primarily powered by hydrogen fuel.

It outlined three new planes that will make up its ‘Zeroe’ fleet.

HOW DO HYDROGEN FUEL CELLS WORK?

Trains and aeroplanes are also being adapted to run on hydrogen fuel, for example.

These ingredients are fused, releasing usable electricity and water as byproducts and making the technology one of the quietest and most environmentally friendly available.

Recent research has suggested hydrogen fuel cell cars could one day challenge electric cars in the race for pollution-free roads, but only if more stations are built to fuel them. 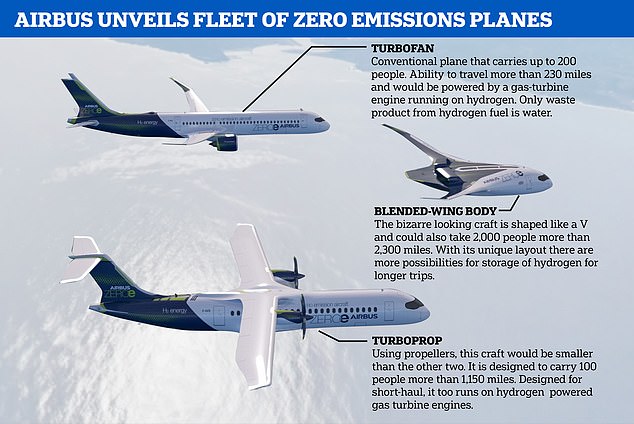 Airbus is leading the way in the field of aviation in pursuing a low-carbon alternative to the current high-pollution business model of air travel.

The planes are called the turbofan, turboprop and the blended-wing body and are earmarked to enter service by 2035, Airbus says.

The turbofan design most closely resembles the current image of a regular plane, with an engine sitting on each wing and a standard fuselage.

It will have a capacity of 200 passengers and, according to Airbus, be able to travel 2,300 miles without the need for refuelling.

Although this will not allow for flights across the Atlantic, it does cover other transcontinental routes.

The turboprop however, is designed for short-haul trips and runs on propellers.

While is has a similar, if smaller, body size, it closely resembles a traditional craft.

However, the propeller-driven machine will have half the capacity of its bigger brother, the turbofan., with room for little over 100 people and a max journey of around 1,150 miles.

The most distinctive and radical concept is named the ‘blended-wing body’ plane, which has the wings merging with the main body of the aircraft in a V-shape.

This has similar statistics to the turbofan but its bizarre shape opens up a host of possibilities with the wide fuselage, which Airbus could make use for extra cabin space, or room for more hydrogen fuel.

A full-size, commercially-available aeroplane powered by hydrogen has completed a successful flight over the skies of Bedfordshire, in a world first.

The company behind the maiden flight is a US-UK firm called ZeroAvia which hopes commercial aviation can be emission free by 2023.

The successful 20-minute flight included a taxi, take-off, full pattern circuit and landing, and will be followed by a 250-mile flight from the Orkney Islands later this year.

The six-seater Piper M-class aircraft took off from Cranfield Airport, which is also the location of ZeroAvia’s research and development facilities.

Hydrogen fuel cells create electricity to power a battery and motor by mixing hydrogen and oxygen — which is provided by the air — via a chemical reaction.

The only waste product produced by this process is water, unlike traditional aviation which is a major contributor to greenhouse gas emissions.