World’s first ‘antibacterial smartphone’ uses silver ions to reduce the spread of microbes by 99.9 per cent in 24 hours

The world’s first antibacterial phone which stops the spread of germs has been built by a Reading-based company called Bullitt.

Called the Cat S42, it is the entry-level device made by the firm and is built to be tough, durable and versatile.

It can currently be bought for £229 but models equipped with the Biomaster antimicrobial technology will not be available until Spring 2021.

Bullitt then hopes to bring the antimicrobial feature to other Cat phones later next year, including the slimline £380 S52 and the flagship £599 S62 with thermal imaging.

It combats bacterial spread thanks to sIlver ions embedded in the handset’s materials during manufacturing process.

While it doesn’t actively neutralise bacteria or viruses, including Covid-19, it does stop the spread and multiplication of pathogens.

By stopping microbes from replicating, their numbers naturally dwindle. Bullitt claims the ‘Biomaster active antimicrobial agent’ reduces the number of bacteria by 80 per cent within 15 minutes and 99.9 per cent within 24 hours. 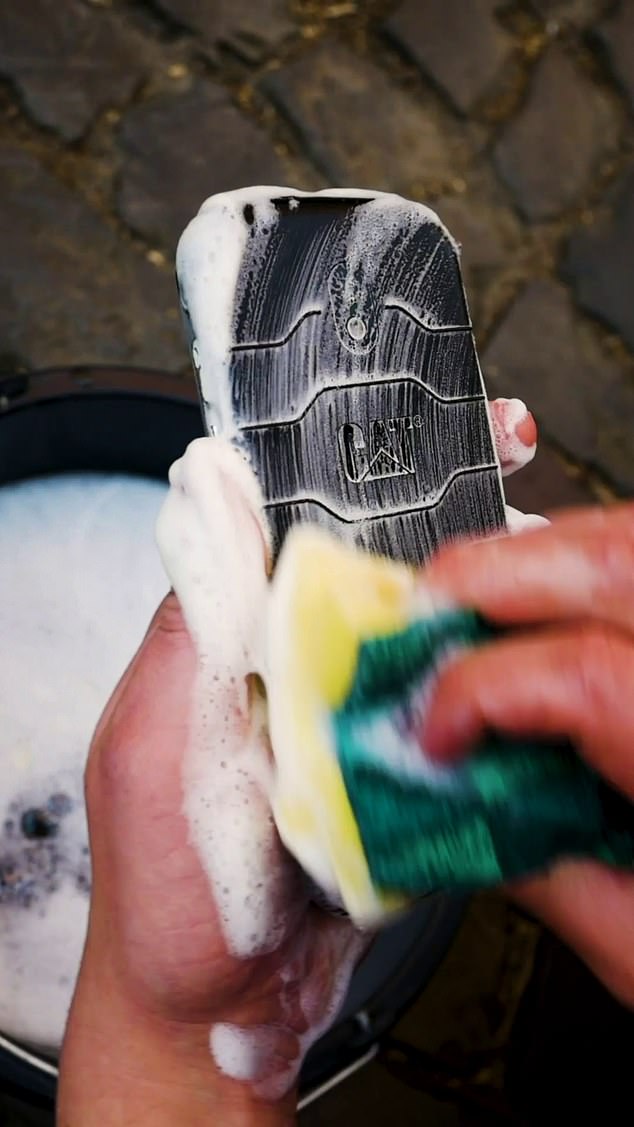 The Cat S42 is the entry-level device made by the firm and is built to be tough, durable and versatile. It can currently be bought for £229 but models equipped with the Biomaster antimicrobial technology will not be available until Spring 2021

The hardy handset’s makers say the device is completely waterproof and should be regularly washed with soaps and water, sanitisers, and even bleach to keep it clean.

‘This is vital for those among our customers working within a health or social care setting, and those visiting multiple sites for their job,’ said Peter Cunningham, Vice President at Bullitt Group.

‘Using a Cat phone already allows them to have confidence that they can wash and sanitise their Cat phone regularly or between visits.

‘The addition of antimicrobial product protection into the Cat S42 is another first for Cat phones, and will make the Cat S42 safer for users – such an important feature in the current climate.’

The Government still advocates regular hand washing as a tool to combat the coronavirus pandemic with the current slogan from Number 10 being ‘hands, face, space’.

Professor Peter Hall from the University of Waterloo believes phones should be cleaned twice a day, once at lunch and once at tea, to prevent further transmissions.

Drop tested to 1.8M onto steel

Waterproof up to 1.5 meters for 35 minutes

5.5″ HD+ 18×9 display optimised for outdoor use with a touchscreen that can be used with wet fingers or when wearing gloves

Alcohol wipes are best suited to kill the virus, but Apple recommends using a microfibre cloth and soapy water.

There is potential to catch the virus from a phone screen but it is far more likely to be passed via human-to-human contact.

The S42 is also waterproof up to 1.5 meters (five feet) for 35 minutes and, as part of testing, was repeatedly dropped onto steel from 6ft (1.8m) in the air.

Its gorilla glass and stainless steel case is unfazed by such drops, and is also immune to dirt, dust, severe temperature swings and vibrations.

Cat is adapting its devices to embrace a world shook by the coronavirus pandemic.

The CAT S62 Pro device, the big brother of the S42, is a regular-looking Android device with a sleek design and a FLIR thermal camera.

The thermal imaging is designed to give detailed looks at heat coming from radiators, cows or engines.

However, the phone’s creators say the thermal-scanning capabilities could also be used to help screen employees for a fever, which may be brought on by Covid-19.

Mr Cunningham told MailOnline that most people who buy the device will use the thermal camera for its practical applications in plumbing, farming or other trades.

For example, spotting uneven heat distribution in radiators, finding ailments in livestock, or spotting gaps in the insulation of houses.

However, in the current coronavirus-stricken world, he acknowledged its heat-spotting capabilities could be useful as a form of coronavirus screening.

‘In terms of people who use this phone, I think the majority of them will be using it for all of the other use cases but there will be some who will be deploying these phones for thermal screening,’ he said.

‘A thermal camera, unless you are paying thousands of pounds for it, is not accurate enough to measure someone’s temperature. 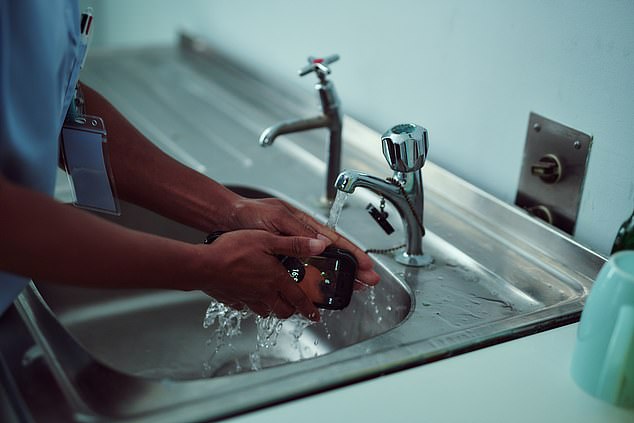 Bullitt claims the ‘Biomaster active antimicrobial agent’ reduces the number of bacteria by 80 per cent within 15 minutes and 99.9 per cent within 24 hours. The phone is also fully waterproof and impervious to soap, bleach and sanitiser 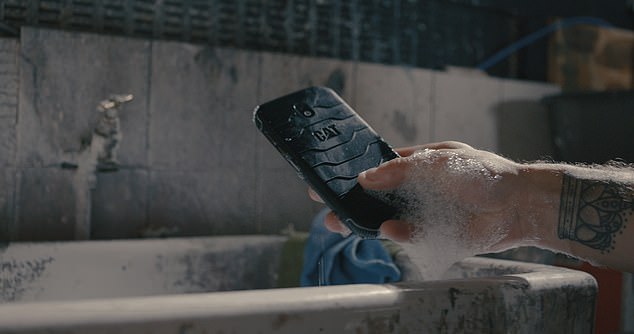 The hardy handset’s makers say the device is completely waterproof and should be regularly washed with soaps and water, sanitisers, and even bleach to keep it clean. ‘This is vital for those among our customers working within a health or social care setting, and those visiting multiple sites for their job,’ says Bullitt VP Peter Cunningham

‘But what our thermal camera is very good at is thermal sensitivity, so it is good at sensing small changes in temperature.

‘You could use it from a screening point of view and that is an application that we have deployed on it so you would set it up in a reception on a tripod.’

Reading Football Club used the S61 for thermal screening of staff and players when they came back to the club’s facility.

The application on the CAT phone employs the thermal camera, and the phone either shows red or green when a person pauses briefly in front of it.

If they fail this very quick process, they can be pulled aside for a more accurate temperature check from a medical professional.

Coronavirus can survive on hard surfaces such as phone screens for up to a week and offers a potential route of infection, scientists warned in March.

The hardy virus spreads via droplets released in coughs and sneezes and the residue can remain potent for seven days on surfaces such as handles and handsets.

Experts warn phones could be acting as a petri dish cultivating the killer microbe and say alcohol wipes should be used twice a day to disinfect the device.

Professor William Keevil, from the University of Southampton, told Metro: ‘You could be washing your hands, but if you start touching your smartphone screen and then touch your face that is a potential route of infection.’