Motivation to learn new things and engage with life declines with age due to falling activity in a brain circuit that weighs costs and benefits, a study on mice suggested.

US experts have been studying ‘striosomes’ — clusters of cells in the basal ganglia, a brain area linked to habit formation, movement control, emotion and addiction.

They team found that striosomes are key to the decision making process when dealing with ‘approach-avoidance conflict’ — when a choice has both pros and cons.

For example, one such thorny problem might be whether or not to take a new job that pays better, but would also call for a move away from family and friends.

Working with mice, the researchers found that striosomal activity is correlated to the evaluation of costs and benefits — but that this activity diminishes with age.

In a similar fashion, older mice were seen to be less motivated to engage with the experiment that forced them to deal with approach-avoidance conflict.

However, the team found that they could increase or decrease the motivation of mice in the decision-making activity by boosting or suppressing striosome activity.

In 2017, the same team found — also in rodent models — that stress can influence the performance of striosomes in decision making and lead to bad choices.

Another study published this week — which polled 917 Norwegians about their levels of passion and grit — also concluded that motivation dwindles with age. 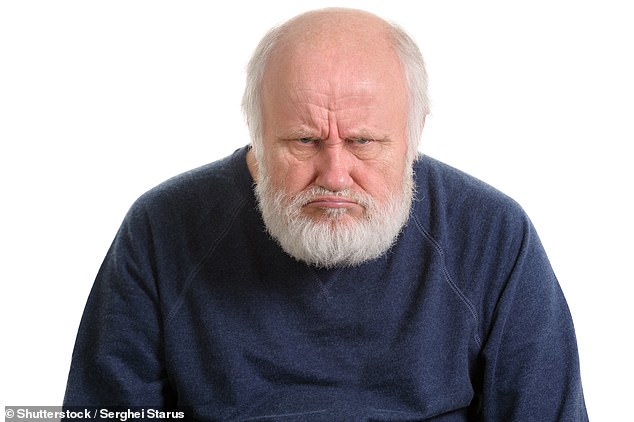 Motivation to learn new things and engage with life declines with age due to falling activity in a brain circuit that weighs costs and benefits, a study on mice suggested (stock image)

‘As we age, it’s harder to have a get-up-and-go attitude toward things,’ said neurophysiologist Ann Graybiel of the Massachusetts Institute of Technology.

‘This get-up-and-go, or engagement, is important for our social well-being and for learning — it’s tough to learn if you aren’t attending and engaged.’

In their study, Professor Graybiel and colleagues studied striosomes activity as mice learn to make decisions involving approach-avoidance conflict — and how such brain activity changes as the rodents get older.

To create choices with both positives and drawbacks, the team played mice with two different tones — the first of which was accompanied by the release of sugar water from a spout, and the second with an unpleasantly bright light.

The mice learnt that if they licked the spout more when they heard the first tone, then they would get more sugar water — but that licking less during the second tone would result in the negative stimulus of the light being dulled slightly.

Learning what to do in each situation involves an evaluation of the values of the costs and rewards involved in a given response.

As the mice learned how to approach the experimental task, the researchers found that the striosomes exhibited higher levels of activity than any other part of the striatum — the part of the basal ganglia in which striosomes are found.

Moreover, the team noted that the activity in these cell clusters showed a correlation with the mice’s corresponding response to each of the tones — indicating that the striosomes likely play in role in the brain’s assigning of values to given outcomes.

‘In order to survive, to do whatever you are doing, you constantly need to be able to learn. You need to learn what is good for you, and what is bad for you,’ said paper author and physiologist Alexander Friedman of the University of Texas at El Paso.

‘A person, or this case a mouse, may value a reward so highly that the risk of experiencing a possible cost is overwhelmed,’ added fellow author and neuroscientist Emily Hueske of the Massachusetts Institute of Technology. 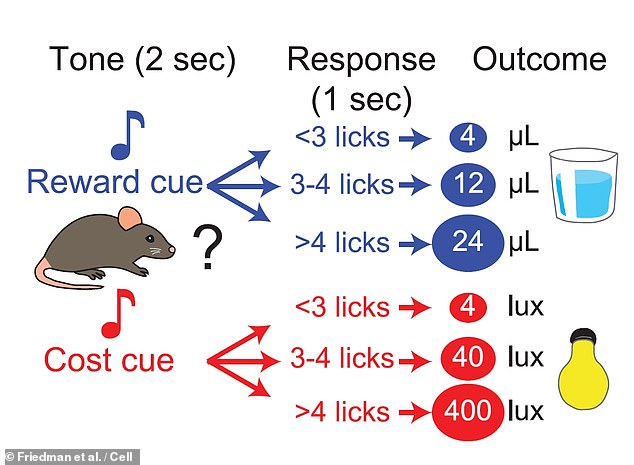 To create choices with both positives and drawbacks, the team played mice with two different tones — the first of which was accompanied by the release of sugar water from a spout, and the second with an unpleasantly bright light. The mice learnt that if they licked the spout more when they heard the first tone, then they would get more sugar water — but that licking less during the second tone would result in the negative stimulus of the light being dulled slightly

In the second part of their study, the researchers compared the striosome activity between young mice and their older counterparts — specifically, those between the ages of 13—21 months, or the equivalent of 60+ in ‘human years’.

They found that older mice were less engaged in the experimental task — and that, similarly, the activity in their striosomes was much lower than in younger mice.

A comparable reduction in motivation was also seen in a mouse model of Huntington’s disease — a neurodegenerative disorder that affects the striatum and the striosomes within.

Finally, the researchers found that they could administer genetically targeted drugs to the mice to either boost or suppress striosomal activity — and correspondingly raise or diminish the rodents’ motivation to engage in the experimental task.

As the mice learned how to approach the task, the researchers found that the striosomes exhibited higher levels of activity than any other part of the striatum — the part of the basal ganglia where striosomes are found. Pictured, striosomes revealed by different markers

With their initial study complete, the researchers are now working towards potential drug treatments that could help to stimulate activity in the striosomes of humans — and help give people back some of their ‘get-up-and-go’.

In a similar fashion, they added, it may be possible to train patients to enhance striosome activity by means of biofeedback.

‘If you could pinpoint a mechanism which is underlying the subjective evaluation of reward and cost, and use a modern technique that could manipulate it,’ Dr Friedman commented, ‘patients may be able to activate their circuits correctly.’

Such treatments would be relevant outside of combatting the regular effects of aging, as many mental health disorders — such as anxiety, depression and PTSD — can also serve to skew the ability to evaluate the costs and rewards of given actions.

For example, individuals with depression often undervalue potentially rewarding experiences, while those struggling with addiction can end up overvaluing drugs.

The full findings of the study were published in the journal Cell.

Across six studies two researchers, Dr Shai Davidai from the New School for Social Research and Professor Thomas Gilovich of Cornell University, examined the idea that deepest regrets come from not pursuing our most ambitious dreams.

They found that the these deep-rooted regrets stem from such things as not pursuing a loved one, abandoning hopes of playing a musical instrument and not travelling the world.

These relate to what is dubbed a person’s ‘ideal-self’ – the image every person has in their head of who they are and the type of person they want to be.

Other examples included (ages of anonymous volunteers in brackets):

• ‘My freshman year of college I was offered an incredible opportunity to do my own research in two different countries. I didn’t go because my family didn’t want me to go and I had concerns over finances to do with my apartment, funding it and my pet’ (22 years old)

• ‘My biggest regret was not going to graduate school when I had the opportunity. I have found success elsewhere and raised my family how I wanted to, but I have always regretted not going’ (54 years old)

• ‘My biggest regret in life was not pursuing my dream of singing. I followed a traditional route instead and became a teacher. The dream remains… the what if!’ (62 years old)

• ‘I regret not having gotten involved in anything extracurricular during my high school years. I was in the national honour society but that hardly counts (33 years old)

• ‘I regret not keeping in touch with my best friend in college. It pains me that we lost touch’ (26 years old)

• ‘I think that I did not pursue a career in acting when I was younger. I feel like I gave up on my dream because doubts others had. I wish I could go back in time and tell my younger self to believe in my talent more.’ (35 years old)

• ‘The biggest regret was to remarry and leave a job, home and state I was happy with. I made a terrible mistake and gave up way to much to alleviate a loneliness I was feeling. What a fool I was’ (71 years old)

• ‘Many years ago when my husband and I first married, we nearly bought our dream house. It wasn’t ideal but we loved it. We decided not to buy it as we felt pressure from our parents. I regret not stepping up, being an adult and going with my gut feeling. I regret letting our parents influence us so much. I also regret it because not only would it have been a great investment.’ (46 years old)