When in flight, a bird’s wings are capable of acting like an automatic suspension system, dampening the effects of turbulence even in stormy conditions.

Working with a trained owl, British researchers found that birds change their wing shape and posture to essentially ‘reject’ gusts of wind.

The findings of the study, the team said, could help to develop new designs for nature-inspired small-scale aircraft. 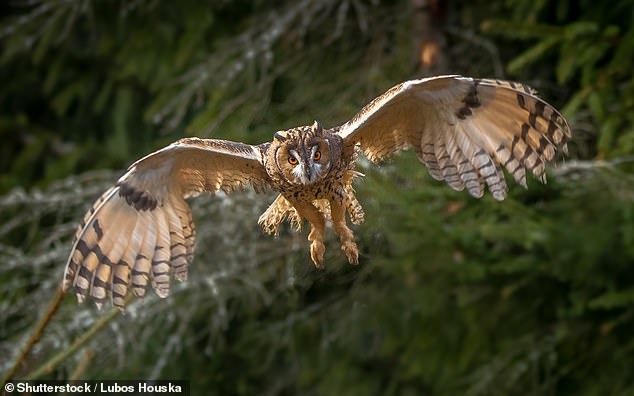 When in flight, a bird’s wings are capable of acting like an automatic suspension system, dampening the effects of turbulence even in stormy conditions. Pictured, a long-eared owl

‘Birds routinely fly in high winds close to buildings and terrain – often in gusts as fast as their flight speed,’ said paper author and aerospace engineer Shane Windsor of the University of Bristol.

‘So, the ability to cope with strong and sudden changes in wind is essential for their survival — and to be able to do things like land safely and capture prey.’

‘Birds cope amazingly well in conditions which challenge engineered air vehicles of a similar size but, until now, we didn’t understand the mechanics behind it.’

In their study, Dr Windsor and colleagues filmed barn owl gliding in a laboratory setting through a series of fan-generated vertical gusts, the strongest of which matched her own flight speed, generated by fans.

The owl they worked with — Lily, a trained falconry bird — is a veteran of a number of nature documentaries, meaning that she would not be disturbed by the lights and cameras used to record her flight.

‘We began with very gentle gusts in case Lily had any difficulties,’ said paper author and biomechanics expert Richard Bomphrey of the Royal Veterinary College.

However, he continued, they ‘soon found that — even at the highest gust speeds we could make — Lily was unperturbed; she flew straight through to get the food reward being held by her trainer, Lloyd Buck.’

‘Lily flew through the bumpy gusts and consistently kept her head and torso amazingly stable over the trajectory, as if she was flying with a suspension system,’ said paper author Jorn Cheney, also of the Royal Veterinary College.

‘When we analysed it, what surprised us was that the suspension-system effect wasn’t just due to aerodynamics but benefited from the mass in her wings.’

In humans, our arms together account for only a tenth of our total bodyweight — however for birds the wings account for around double that.

It is this extra mass which allowed Lily to absorb the brunt of each gust and continue to fly stably to her goal.

Working with a trained owl, British researchers found that birds change their wing shape and posture to essentially ‘reject’ gusts of wind. Pictured, the wind surface shape of the barn owl as both a point cloud, left, and as a computer-generated model, right

‘Perhaps most exciting is the discovery that the very fastest part of the suspension effect is built into the mechanics of the wings,’ added paper author and aerospace engineer Jonathan Stevenson of the University of Bristol.

‘So birds don’t actively need to do anything for it to work. The mechanics are very elegant,’ he added.

‘When you strike a ball at the sweet spot of a bat or racquet, your hand is not jarred because the force there cancels out.’

‘Anyone who plays a bat-and-ball sport knows how effortless this feels. A wing has a sweet spot, just like a bat.’

The team’s analysis revealed that the force of buffeting gusts act near this sweet spot — meaning that the resulting disturbance is markedly reduced in the critical first fraction of a second after impact.

This buts enough time for other stabilising processes to kick in, they added.

With their initial study complete, the team will now be working to apply their findings to help them develop better suspension systems for small aircraft.

The full findings of the study were published in the Proceedings of the Royal Society B: Biological Sciences.

WHY DO MIGRATING BIRDS FLY IN A V-FORMATION?

Birds fly in a v-formation to help them fly more efficiently, staying aloft while expending as little energy as possible.

Scientists learned the aviation secrets of migrating birds after attaching tiny logging devices to a flock of 14 northern bald ibises that not only tracked their position and speed by satellite but measured every flap of their wings.

The 14 birds used in the study were hand-reared at Vienna Zoo in Austria by the Waldrappteam, an Austrian conservation group that is re-introducing northern bald ibeses to Europe.

Birds fly in a v-formation to help them fly more efficiently, staying aloft while expending as little energy as possible (stock image)

The birds were studied as they flew alongside a microlight on their migration route from Austria to their winter home in Tuscany, Italy.

Lead researcher Dr Steve Portugal, from the Royal Veterinary College, University of London, said: ‘The distinctive V-formation of bird flocks has long intrigued researchers and continues to attract both scientific and popular attention, however a definitive account of the aerodynamic implications of these formations has remained elusive until now.

‘The intricate mechanisms involved in V-formation flight indicate remarkable awareness and ability of birds to respond to the wingpath of nearby flock-mates. Birds in V-formation seem to have developed complex phasing strategies to cope with the dynamic wakes produced by flapping wings.’

When flying in a V formation, the birds’ wing flaps were approximately ‘in-phase’, meaning all the wing tips followed roughly the same path, the scientists found.

This helped each bird capture extra lift from the upwash of its neighbour in front.

Occasional shifts of position within the formation meant that at times birds flew directly one behind the other.

When this happened, the birds altered their wing beats to an out-of-phase pattern to avoid being caught by downwash.