As the credits roll at the end of the sobering new Netflix docu-drama The Social Dilemma, computing philosopher Jaron Lanier adds a few final words about social media: “Get off the stupid stuff. The world is beautiful. Look, look, it’s great out there,” he tells the interviewer, gesturing towards the bright, sunny day outside.

He is right, of course. But it's not so easy to look up from your phone – which, The Social Dilemma postures, is just the way social media companies such as Facebook and Twitter want it. 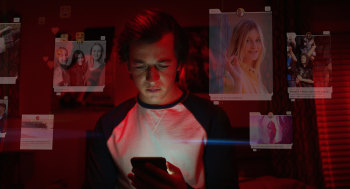 The film says that manipulating users and making them addicted to their smartphones is key to a business model that is responsible for unparalleled damage to our social fabric.

Over the past few years we have been bombarded with news stories detailing the harms caused or augmented by social media: fake news, hate speech, political polarisation, civil unrest – and an unrealistic pursuit of perfection that has been linked to increasing rates of anxiety and self-harm among young people.

A report published earlier this month points out just how vacuous and vicious social media can be for girls and young women in particular. The bullying and friendship dramas that used to be limited to the school playground now follow girls home on their phones.

The Plan International report found 65 per cent of Australian girls and women aged 15 to 25 had been harassed online, falling victim most often to abusive language, body-shaming, stalking and purposeful harassment.

For all the harms it can cause – the competition for likes, the fear it will turn against you, or that intimate photos sent to a boyfriend will end up on the news feed of everyone in your class – there are benefits to the digital world too.

Research in 2011 found three in four Australian children aged nine to 16 were spending about 90 minutes a day online. And that was before the COVID-19 lockdowns forced many of them to learn online, as well as do most of their socialising there.

The digital world provides teenagers with opportunities to develop social connections, to engage in a shared world with their peers and to be entertained. Employers too look at digital footprints when hiring, so teenagers who have savvily curated a positive one may have an advantage in the job market.

University of Newcastle research has pointed out the need to move beyond moral panic over teenage use of social media and the intrinsic, paternalistic response of grown-ups to just ban it, and instead recognise that with guidance and co-operation, children and teenagers can use social media to their benefit.

The Office of the eSafety Commissioner has recognised this too and developed a series of tools and resources for schools, parents and children to help children build resilience and learn how to make responsible decisions online. Education departments are building such lessons into their curriculums.

eSafety Commissioner Julie Inman Grant has said social media companies are not pulling their weight when it comes to managing the problems caused by their sites and policing the content posted on them. Governments around the world are increasingly wrangling with the harms caused by these companies. If the companies don’t come up with some solutions soon, they risk having solutions imposed upon them – and they might not like what they get.

In the meantime, talk to your children about social media. And make sure they have the skills and the strength to dive into that world before they find themselves drowning in it.