More than a quarter of ‘Gen Zers’ are now teetotal as young adults turn their back on booze and smoke cannabis instead, study suggests

The Boomer, Gen X and Millennial obsession with alcohol has not trickled down to the current crop of young adults, Gen Z, with many turning their back on liquor.

Among university students teetotalism surged from 20 per cent to 28 per cent in 16 years, while in non-students of the same age it increased from 24 to 30 per cent.

As well as more people ditching booze, it seems today’s youths have also mastered a skill their predecessors could not, drinking in moderation.

According to the data, a survey of 182,722 people, alcohol abuse among this cohort has been slashed in half.

But while gin, wine and beer may be losing their appeal, the use of cannabis, which is illegal in many states and countries, has increased. 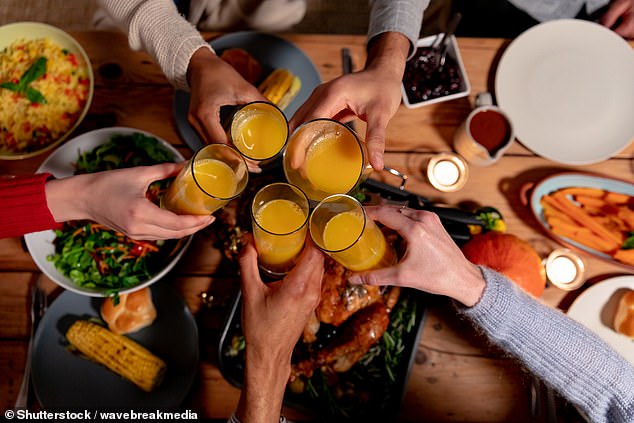 A US study looked at how much booze was consumed, on average, among 18 to 22-year-olds in both 2002 and 2018 and the level of abstinence. Among university students teetotalism surged from 20 per cent to 28 per cent while in non-students of the same age it increased from 24 to 30 per cent (stock)

Researchers said that, overall, the findings show a positive trend when accounting for alcohol and cannabis use and misuse among the age group.

Study lead author Professor Sean Esteban McCabe, of the University of Michigan School of Nursing, said: ‘We’re encouraged by the significant decreases in alcohol use disorder-for both college and non-college students.

‘The prevalence of alcohol use disorder in both groups in 2018 was roughly half of what it was in 2002.

‘We are excited to learn about these drops in disordered drinking, as alcohol-related consequences are one of the leading causes of mortality and morbidity for young adults.’

Co-author Professor Ty Schepis, of Texas State University, adds that although the use of marijuana has increased, the study contains promising findings.

However, he does say the increase in the use of both alcohol and marijuana is alarming, as it can have more serious health complications and be harder to treat.

‘The findings of our study reinforce the complex task health professionals have of detecting and developing effective interventions to reduce consequences associated with polysubstance use, such as co-use of alcohol and marijuana.

‘The finding that abstinence is increasing among college students and young adults not in college is very important for U.S. colleges and universities to take into account moving forward.

‘These findings reinforce the importance of the need to support those young adults in recovery and abstinence for other reasons.

‘There are over one million U.S. young adults in recovery and a wide variety of resources are needed to support these individuals.’

The researchers said their findings indicate that the substance use landscape has changed over the last 20 years, with more young adults using or misusing several different substances, as opposed to just cannabis or alcohol.

‘That is a ten-fold difference with potentially dangerous consequences.’

The findings are published in the journal JAMA Pediatrics.

Alcoholism is the most severe form of alcohol abuse and involves the inability to manage drinking habits.

It is organised into three categories: mild, moderate and severe. Each category has various symptoms and can cause harmful side effects.

If left untreated, any type of alcohol abuse can spiral out of control.

Individuals struggling with alcoholism often feel as though they cannot function normally without alcohol.

This can lead to a wide range of issues and impact professional goals, personal matters, relationships and overall health.

Sometimes the warning signs of alcohol abuse are very noticeable. Other times, they can take longer to surface.

When alcohol addiction is discovered in its early stages, the chance for a successful recovery increases significantly.

Common signs of alcoholism include:

For instance, drinking can impact your reaction time, causing you to have slow reflexes and coordination.

That’s why drinking and driving is extremely dangerous. Getting behind the wheel of a car can alter your perception of speed and distance, putting yourself and others at risk.

Additionally, consuming too much alcohol can affect your long-term health. Some side effects may lay dormant for years before they surface.

Because of this, professional medical care is required for proper diagnosis and treatment.

There are different forms of treatment available based on frequency and severity of alcohol abuse.

Recovering from alcohol addiction is a process that continues long after rehab.

It takes commitment to practice and apply the techniques you learn in rehab, counseling, support groups and other types of therapy.

Although every individual will have their own recovery plan that’s tailored to their specific needs, treatment generally follows a structure.

Alcohol treatment is broken into three sections, consisting of:

The first stage in alcohol addiction recovery is detoxification. This phase should be completed with the help of medical professionals due to the potential for serious, uncomfortable withdrawal symptoms. Many times, individuals are given a medication to help alleviate the painful side effects of a withdrawal.

There are two types of rehabilitation that help treat alcoholism: inpatient rehab and outpatient rehab. Inpatient rehabs are intensive treatment programs that require you to check into a facility for a certain period of time, usually 30, 60 or 90 days. Outpatient rehab allows individuals to participate in a recovery program while continuing with their daily life. Talk with your doctor about treatment options to determine which form of recovery will best fit your needs.

The recovery process doesn’t end with the completion of rehab. Long-term sobriety requires ongoing therapy and may entail support groups, counseling and other recovery resources. These will make sure you maintain sobriety and continue on a happy, healthy path for months and years to come.