A swarm of hundreds of earthquakes, including one measured at magnitude 4.9, hit near the Imperial Valley in Southern California on Wednesday afternoon.

Over a period of two-and-a-half hours, a total of 45 quakes above 3.0 on the Richter scale shook the rural desert town of Westmorland, two hours east of San Diego, and could be felt as far away as Riverside County.

The U.S. Geological Survey said there was a total of 240 quakes altogether by 8 p.m. PT.

Seismologist Lucy Jones explained that each earthquake makes more earthquakes likely, “but only nearby. Today's M4.9 fault is ~2 miles across, so it can affect quakes within ~5 miles. The only faults nearby are small. In other words, there is no scientific reason to predict a big quake in another location today.” 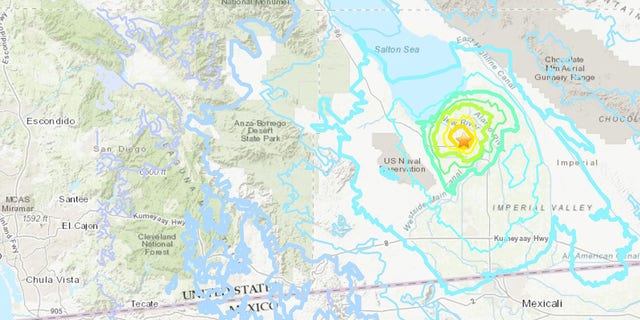 A cluster of earthquakes hit south of the Salton Sea in California’s Imperial Valley Wednesday.
(USGS)

She assured that none of the quakes have hit close to the dreaded San Andreas Fault.

“They are in the Brawley Seismic Zone – a network of small faults that connect the San Andreas and Imperial faults,” she wrote on Twitter, adding the temblors were more than 18 miles away from the San Andreas Fault.

Jones said the cluster of quakes is one of the largest swarms the Imperial Valley has had, adding the area frequently gets swarms.

She said the largest quake to ever come from the Brawley Seismic Zone was a 5.8.

On Tuesday, an earthquake swarm of four small temblors rattled areas around a reservoir in Northern California – the second time in three days that multiples quakes struck the area.