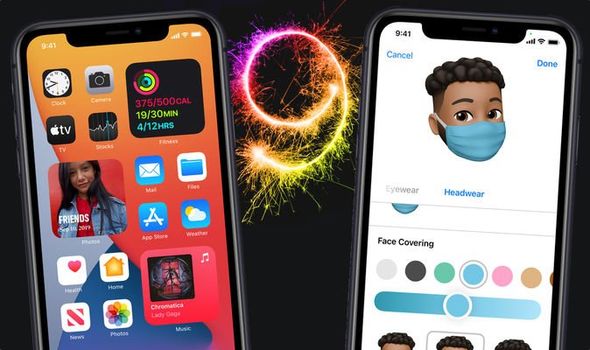 iOS 14 is available to download right now to your iPhone. In celebration, we’ve highlighted nine of the best new features coming to your smartphone that you need to know about.

Apple has flipped the switch and started to roll-out its feature-packed iOS 14 update to iPhone owners across the globe. For those who missed it, iOS 14 was teased earlier this summer during Apple’s annual developer conference. Since then, the Californian company has been quietly tweaking the free operating system upgrade and ironing out any bugs. Third-party developers have also used the last few months to update their apps to support the latest features – so you should have a truckload of iOS app updates waiting for you in the App Store as soon as you’ve upgraded your iPhone to iOS 14.

With millions of iPhone owners now staring at the download progress bar – willing iOS 14 to download and install faster – we thought it was a good time to take a look at some of the most exciting and most useful new features packed into this new update. This isn’t everything available with iOS 14, but these are the features you’ll want to rush to try out before any others.

With iOS 14, Apple has rolled out the single biggest change to the iPhone since its launch. For the first time, Apple will allow iPhone owners to make changes to their homescreen. Until now, iPhone fans have been only able to change the background on their handset or re-order their app icons on the grid. With iOS 14, new interactive widgets can be placed in between your grid of apps – widgets can come in a number of sizes and offer the information you need at a glance.

So, you could have the News widget front-and-centre as well as important Calendar events to keep tabs on your day without the need to constantly hop into the dedicated apps and refresh your feeds. On the next page, you could have your Fitness summary as well as an expansive Apple Music widget to queue-up your favourite playlist when you jump on the treadmill.

Apple offers an AI-powered widget known as Smart Stack which cycles through a number of different options based on the time of day, your habits with your iPhone, and current location. Your iPhone will keep track of your habits so that it can serve-up your favourite widget as soon as you need it. So, if you always check the weather at 7.30am and launch Apple Music when you board the train in the morning, these will be automatically presented on your iPhone homescreen using Smart Stack. 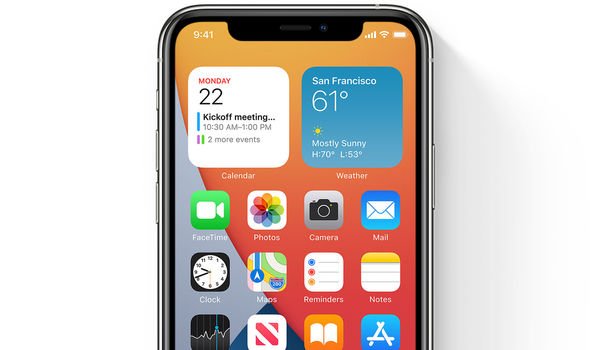 Just like on iPad, iOS 14 brings picture-in-picture video to the iPhone for the first time. So, you’ll be able to continue watching your favourite YouTuber while you continue to whizz around your iPhone to text friends, check directions, and more. It also means you’ll be able to continue to use your iPhone during a FaceTime call. On iOS 13 and earlier, FaceTime would cut the video whenever iPhone owners tried to use their smartphone for anything else while staying on the line.

Apple lets you resize the Picture in Picture window by pinching the video. You can also place it in any corner of the screen by dragging it. 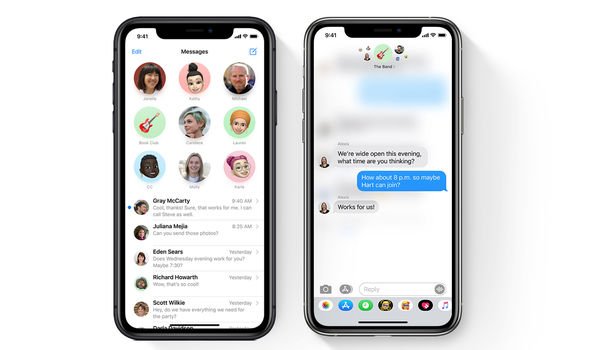 If you’re anything like us, you probably have a folder on your iPhone brimming with apps you’d rather not have cluttering your homescreen. These are apps you probably don’t launch every day, but are worth keeping around just in case – restaurant ordering apps, parking tickets, apps to help you split the bill when out with friends, and the like. With iOS 14, you won’t need to keep every app installed on your iPhone on the homescreen. Instead, iOS apps are automatically organised for you.

At the end of homescreen, you’ll find a new App Library that automatically organises all of your installed apps into one simple, easy-to-navigate view, and intelligently surfaces apps that may be helpful in the moment. If you find yourself always using the App Library instead of swiping through pages of apps, you can choose to hide some of your homescreen pages for quicker access to the App Library.

iOS 14: Get To Your Favourite Chats Quicker

With iOS 14 installed, you’ll be able to pin your favourite conversations in Messages so you can always get to them. You’ll be able to pin up to nine separate conversations, which will be synced across iPhone, iPad and Mac. And if a group conversation is pinned, you’ll see up to three people circle around the pin whenever there are unread messages. Recent messages and typing indicators will animate above the pin so you can see what is going on with a glance.

iOS 14 packs a number of upgrades for your Memoji, so you can revamp your animated character which appears in Messages as well as Sticker sets that can be used across a wide variety of apps, including WhatsApp and Facebook. Memojis can now sport new hairstyles and headwear. Apple says there are now over a trillion possible combinations including face coverings to prove that you’re taking the requisite Covid-19 precautions. There are also 11 new hairstyles, 19 new headwear styles, and 3 brand-new Memoji stickers to let you send a fist bump, blush, or a hug to your friends. 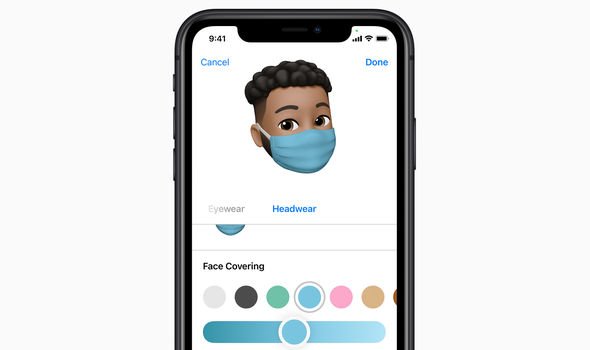 Find the perfect emoji using the default iOS Keyboard. A new search field inside the emoji tab (located in the bottom left-hand corner of the keyboard) now lets you search for the perfect emoji. Enter a commonly used word or phrase such as “heart” or “smiley face” and you will be presented with corresponding emoji to choose from.

Get ready for an improved night’s kip with the new Wind Down shortcut included in iOS 14. This builds on the Bedtime feature introduced into the Clock app with iOS 13. When you set up Wind Down, you’ll now be able to choose from various actions to help you relax before heading to bed, whether that’s dimming down the lights using the Home app, listening to soothing soundscapes, or using your favourite meditation app. You will be able to choose from a collection of relaxing shortcuts, accessible with a single tap from Sleep mode. 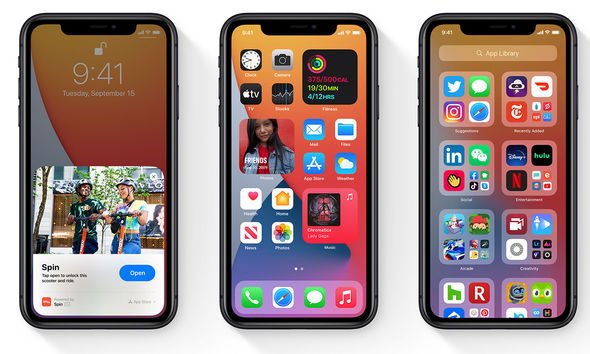 iOS 14 enables you to get notifications when the sound of a fire alarm or doorbell is detected with Sound Recognition. Using on-device artificial intelligence, Sound Recognition notifies iPhone owners who might otherwise miss audible alerts around them. So, if you have a relative who is hard of hearing, you’ll be able to ensure their smartphone always lets them know when someone is at the door, or when they need to safely evacuate the building. The feature is found in the Accessibility menu of the Settings app. If you have an Apple Watch paired with your iPhone, the notifications will display on your wrist with a subtle tap – so there’s even less chance of missing something important. 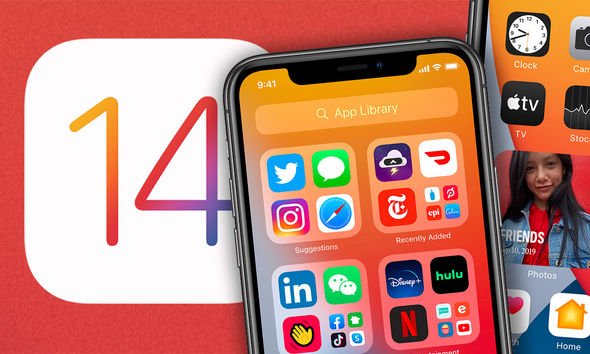 iOS 14: AirPods Owners Never Have To Look At The Bluetooth Settings Ever Again

iOS 14 will seriously improve your experience with the Apple AirPods. After installing the latest update, your AirPods will be able to automatically switch between any device – including iPhone, Apple Watch, iPad, and Mac – signed-in with your iCloud Account. So, you’ll be able to pick-up your iPad to watch a movie and your AirPods automatically move the connection from your iPhone to the tablet. And then, when a phone call comes in – your AirPods automatically switch back to your iPhone, so you’d ready to answer. Apple has added a convenient pop-up banner that surfaces at the top of the screen of each of your device to let you know when and where the audio is being rerouted.

…And there’s even more

Of course, these aren’t the only features introduced in iOS 14. There are a truckload of new changes that’ll change how you use your iPhone every day that we haven’t highlighted above. For example, Siri has also been redesigned so that activating the chatty AI assistant won’t takeover the entire screen with its colourful interface. With iOS 14, the assistant just sits at the bottom of the iPhone screen to let you know that it’s heard your request – but not so obtrusive that you can’t continue with what you were already doing on your handset.

Not to mention the fact that UK, Ireland and Canada will finally get access to the improved new Apple Maps experience. Apple has slowly been rebuilding its entire navigation system with much, much more detail. And now those improvements are coming to Blighty. Cycling directions are also coming soon to the Google Maps rival. Electric vehicle routing adds charging stops along a planned route based on current vehicle charge and charger types. An all-new Guides feature provides a curated list of interesting places to visit in a city, created by a selection of trusted resources.

“iOS 14 transforms the most iconic elements of the iPhone experience, starting with the biggest update we’ve ever made to the Home Screen,” said Craig Federighi, Apple Senior Vice President of Software Engineering. “With beautifully redesigned widgets on the Home Screen, the App Library that automatically organises all of your apps, and App Clips that are fast and easy to discover, iPhone becomes even more powerful and easier to use.”