Facebook is getting back to its roots with the launch of Campus, a new section only available to students.

The product serves as dedicated subsection of the Facebook app that allows students to create a Campus profile distinct from their main profile – all that’s needed is a college email and graduation date.

Your name, profile photo, cover photo and hometown will be imported from your Facebook profile, but you can make edits and add additional details like major, minor and class list.

Once a Campus profile is set up, students can discover groups and events unique to their school, and connect with classmates with similar interests.

Users need a college email address and a graduation date to join. Your name, profile photo, cover photo and hometown will be imported from your main Facebook profile, but you can make edits and add additional details like major, minor and class list.

Campus is intended both to reconnect Facebook with young users, who have drifted toward TikTok, Instagram and other platforms, and to create a virtual community for members who may be separated by the pandemic.

‘This year, students across the country are facing new challenges as some campuses shift to partial or full-time remote learning,’ wrote Facebook Campus product manager Charmaine Hung in a post announcing the launch, ‘so it’s more important than ever to find a way to stay connected to college life.’

One way students can remain connected is through the campus directory, which allows them to find each other by class, major, year and other categories.

Other key features include real-time chat rooms and a school-specific news feed, where students can get updates from classmates, groups and events.

Harvard, where Facebook began, is not among the first wave of schools to have the new feature.

The company says students’ privacy and security is a priority, and content shared on Campus – including profiles, events and groups – can only be seen by other Campus members at the same college. 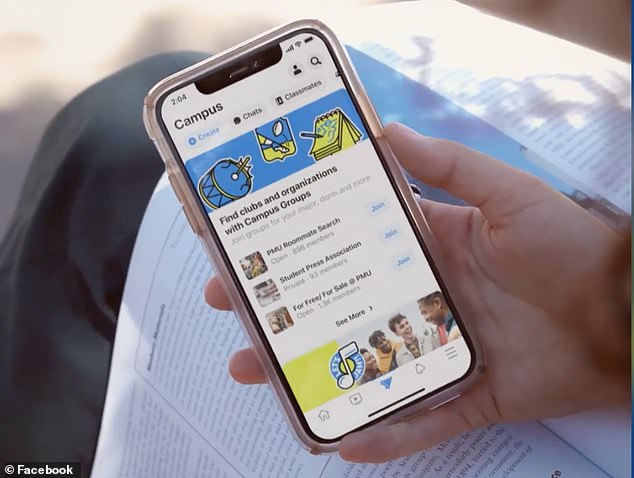 Facebook launched Campus at 30 US colleges, including Brown, Duke, Georgia State, Johns Hopkins, University of Pennsylvania and Vassar. Harvard, where Facebook started, was not one of the universities included in the initial rollout 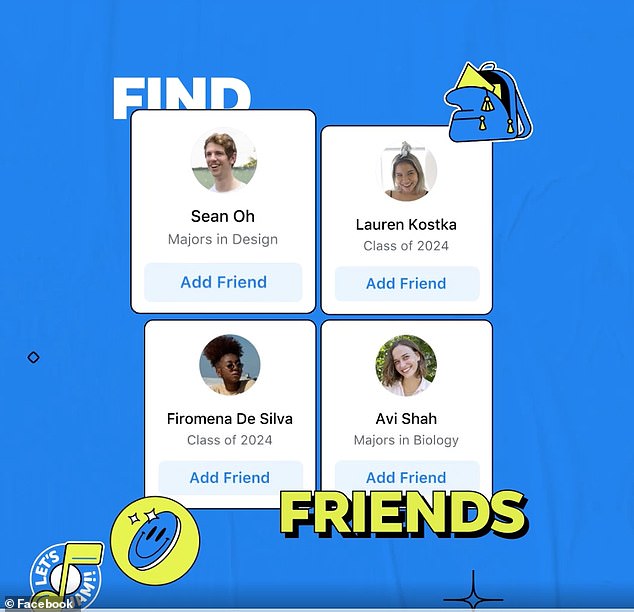 Campus includes a campus directory that allows students to find each other by class, major, year and other categories. If you block someone on Campus, though, they’ll be blocked on Facebook, too

Groups and events can either be open, which means anyone in your school’s Campus can see them, or they can be private.

If you block someone on Facebook, they’ll be blocked on Campus, and vice versa.

And anyone who violates Facebook’s community standards won’t be able to join Campus.

There are college pages on Campus, presumably maintained by university staff. 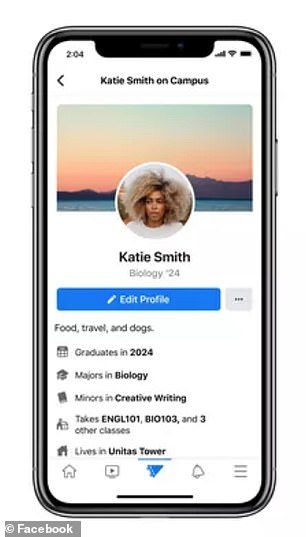 College pages can join and participate in groups and events, and can see your profile if you belong to the same group or event.

Once a student graduates, Facebook will send a notification encouraging them to leave Campus because it won’t be as relevant to them, The Verge reports.

Facebook began in 2004 as ‘TheFacebook,’ a social networking service for Harvard students developed by Mark Zuckerberg and several classmates.

After being expanded to students at Columbia, Stanford, NYU, Yale and MIT, it was eventually opened up to anyone who could verify they were at least 13 years old.

Despite its origins, Facebook has struggled to keep up with younger demographics.

Men and women aged 25 to 34 years are the biggest group of Facebook users in the United States, according to Statista, making up a little more than 13 percent of the user base.

According to a report by Pew Research Center, 51 percent of teens said they used Facebook in 2018, down from 71 percent in 2013.

Zuckerberg promised end-to-end encryption for all of its messaging services, which will be combined in a way that allows users to communicate across WhatsApp, Instagram Direct, and Facebook Messenger.

December 2018: Facebook comes under fire after a bombshell report discovered the firm allowed over 150 companies, including Netflix, Spotify and Bing, to access unprecedented amounts of user data, such as private messages.

Some of these ‘partners’ had the ability to read, write, and delete Facebook users’ private messages and to see all participants on a thread.

It also allowed Microsoft’s search engine, known as Bing, to see the name of all Facebook users’ friends without their consent.

Amazon was allowed to obtain users’ names and contact information through their friends, and Yahoo could view streams of friends’ posts.

September 2018: Facebook disclosed that it had been hit by its worst ever data breach, affecting 50 million users – including those of Zuckerberg and COO Sheryl Sandberg.

Attackers exploited the site’s ‘View As’ feature, which lets people see what their profiles look like to other users.

Facebook (file image) made headlines in March 2018  after the data of 87 million users was improperly accessed by Cambridge Analytica, a political consultancy

The unknown attackers took advantage of a feature in the code called ‘Access Tokens,’ to take over people’s accounts, potentially giving hackers access to private messages, photos and posts – although Facebook said there was no evidence that had been done.

Zuckerberg assured users that passwords and credit card information was not accessed.

As a result of the breach, the firm logged roughly 90 million people out of their accounts as a security measure.

March 2018: Facebook made headlines after the data of 87 million users was improperly accessed by Cambridge Analytica, a political consultancy.

The disclosure has prompted government inquiries into the company’s privacy practices across the world, and fueled a ‘#deleteFacebook’ movement among consumers.

The company boasts it can ‘find your voters and move them to action’ through data-driven campaigns and a team that includes data scientists and behavioural psychologists.

‘Within the United States alone, we have played a pivotal role in winning presidential races as well as congressional and state elections,’ with data on more than 230 million American voters, Cambridge Analytica claimed on its website.

The company profited from a feature that meant apps could ask for permission to access your own data as well as the data of all your Facebook friends.

The data firm suspended its chief executive, Alexander Nix (pictured), after recordings emerged of him making a series of controversial claims, including boasts that Cambridge Analytica had a pivotal role in the election of Donald Trump

This meant the company was able to mine the information of 87 million Facebook users even though just 270,000 people gave them permission to do so.

This was designed to help them create software that can predict and influence voters’ choices at the ballot box.

The data firm suspended its chief executive, Alexander Nix, after recordings emerged of him making a series of controversial claims, including boasts that Cambridge Analytica had a pivotal role in the election of Donald Trump.

This information is said to have been used to help the Brexit campaign in the UK.