An insect-like machine with six individually powered legs that was intended for the battlefield received millions in US government funding during the 1980s.

The project to create a fleet of real-life AT-AT walkers from Star Wars started in 1981 at Ohio State University, as the military searched for ways to traverse rough terrain that wheeled vehicles couldn’t manage.

Called the Adaptive Suspension Vehicle (ASV), the bizarre vehicle was part of a decade-long project which was eventually scrapped after receiving a reported $1million a year from Darpa between 1981 and 1990.

The fate of the ASV is a mystery, with nobody knowing whether it is in storage somewhere or was scrapped decades ago. 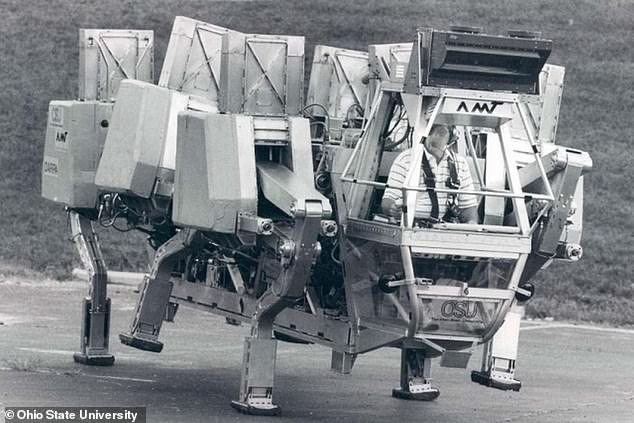 Called the Adaptive Suspension Vehicle (ASV), the bizarre vehicle (pictured) was part of a ten-year project which was eventually scrapped after receiving a reported $1million a year from Darpa between 1981 and 1990

They say: ‘The vehicle uses a legged, rather than a wheeled or tracked, locomotion principle, and is intended to demonstrate the feasibility of systems of this type for transportation in very rough terrain conditions.

‘The vehicle is presently under test, with installation and validation of software modules for different operational conditions scheduled for completion by the end of 1986.’

Its behemoth dimensions allowed it to step over fences and walls while crossing trenches up to 23 feet wide.

However, one of the reasons it failed to live up to expectations and enter into the military’s ground fleet is that it could only do this with a payload of 485 pounds.

Powering the machine was a unique task and everything had to be customised specifically for the ASV.

Engineers came up with an extraordinarily complicated system that would require hydraulic pumps, a 1,000-pound flywheel and a 900cc motorbike engine.

The engine was capable of 91 horsepower but was used to power the flywheel which in turn drove a total of 18 hydraulic cylinders.

This exact process was convoluted and required the engine to power three separate driveshafts. These then transferred power to each leg’s three pumps. 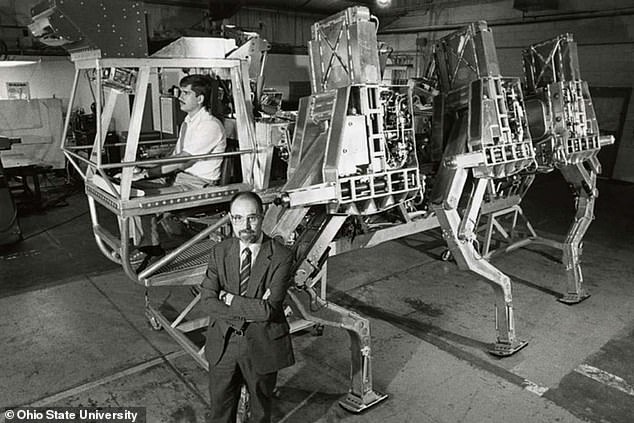 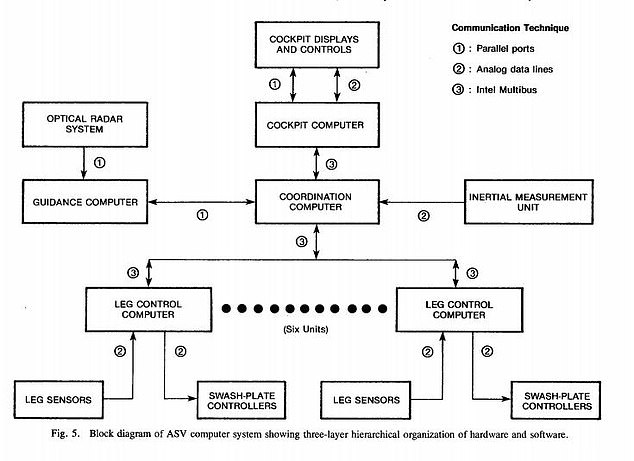 As well as the mechanical components, the ASV also came with 17 individual computers to help the sole driver. Each leg had its own computer, the Intel ’86/30′ 128k, 8-bit chip, which is primitive by today’s standards. The other 11 assisted in the driving, guiding and general operation of the enormous and cumbersome machine (pictured, how computational workload was divided)

US-based firm Boston dynamics was created in the 90s by experts from MIT.

Now, it is owned by engineering giant SoftBank, who also make the lifelike robot Pepper.

Boston Dynamics has mastered the tricky business of legged locomotion and has created a range of walking robots, including the humanoid called Atlas and the robo-dog, Spot.

Atlas is 6ft tall and can carry boxes and also jump.

However, Boston dynamics is best known for Spot, which can now be bought for $74,500.

The robot is four-legged and weighs just 55 pounds (22kg).

With the flywheel spinning at up to 12,000 rpm it could provide 250 watts of power, less than one horsepower, for a total of one hour.

The driver could use more energy, but only for a shorter period of time.

However, for difficult manoeuvers and tricky movements the power needed was greater than could be produced.

As well as the mechanical components, the ASV also came with 17 individual computers to help the sole driver operate the machine.

The other 11 assisted in the driving, guiding and general operation of the enormous and cumbersome machine.

These help the machine find where to place its legs with the aid of a 128×128-pixel camera as well as controlling and powering the cockpit displays and analysing data.

Developers of the robot had hoped to progress to autonomous navigation, but the project was curtailed before this was possible.

‘The Adaptive Suspension Vehicle is not, in its present configuration, an autonomous robot,’ they researchers wrote in 1986.

‘However, the mechanical and control technologies used are the same as those needed for unmanned operation, and an intensive effort to realize this capability is currently in progress.’

Hybrid technology is being tested by the British Army in two of its armoured vehicles as a way to improve sustainability and enhance stealth capabilities.

A spokesperson for MoD says the hybrid engines will improve the army’s stealth abilities as they can run almost-silently compared to the diesel-only models.

The Jackal 2 mobile weapons platform and the Foxhound protected patrol vehicle will be refitted with the new hybrid systems – with testing starting in November.

Prototype hybrids of each vehicle are being built as part of a £3 million investment from the Ministry of Defence to find ways to reduce its carbon footprint but no specific details have been revealed for the individual costs of the vehicles.

The vehicles will keep their diesel-driven internal combustion engines along with batteries and electronics for the first prototypes, but that could change in future versions.

The MoD said the vehicles self-charge from the diesel engine, which runs a generator providing electricity to the battery, so don’t need to be plugged in. 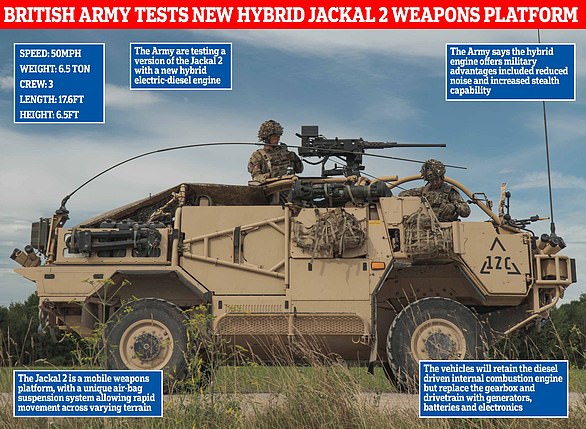