Mysterious ‘gamma-ray heartbeat’ from a gas cloud 15,000 light years away that is powered by an orbiting black hole baffles scientists

A gas cloud 15,000 light years from Earth has a ‘gamma-ray’ heartbeat powered by a nearby black hole – but astronomers don’t know how the heartbeat gets its energy.

Scientists detected the heartbeat in the centre of a cloud in the constellation Aquila and it beats to the rhythm of a ‘microquasar’ system with a central black hole.

According to the team from the Deutsches Elektronen-Synchrotron (Desy) this suggests there is a connection between the gamma-ray burst and black hole.

The problem is that they’re not sure how the black hole powers the cloud’s gamma-ray heartbeat when there is about 100 light years between the two stellar objects.

One theory is that fast protons are produced near the black hole then injected into the stellar cloud where they hit gas and produced the gamma-rays. 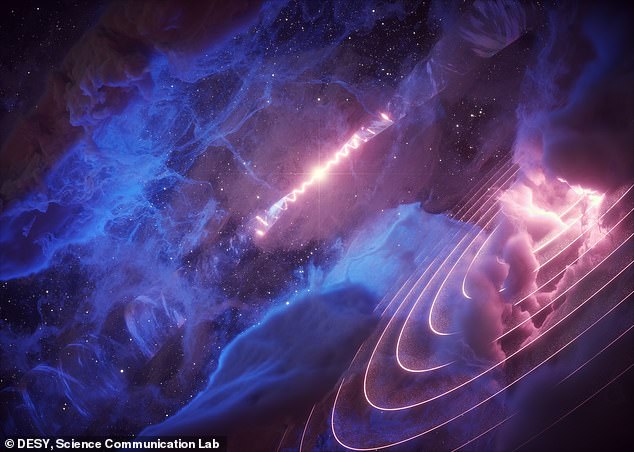 The microquasar SS 433 (background) sways with a period of 162 days. The inconspicuous gas cloud Fermi J1913+0515 (foreground), about 100 light years away, pulsates with the same rhythm in gamma rays, suggesting a direct connection 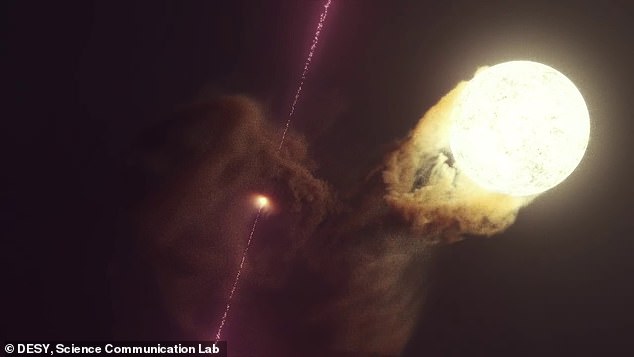 The system has been dubbed SS 433 and consists of a giant star with about 30 times the mass of our sun and a black hole with about 10 to 20 solar masses. The black hole is drawing matter from the giant star

The research team rigorously analysed more than ten years of data from NASAs Fermi gamma-ray space telescope which was looking at a so-called micro quasar.

Microquasar SS 433 is a black hole and a giant star orbiting each other.

The black hole sucks matter from the star which collects as an accretion disc before falling into the black hole.

Some of the matter does not fall into the hole, but is hurled out into space.

As the accretion disc isn’t on an exact orbital plane it sways like a spinning top set at an angle.

The jets are also at an angle and form something like ‘spirals in space’.

In the same rhythm as the jets and disc, a gas cloud 100 light years away shines with gamma radiation.

It is unclear how the gas cloud gets its energy to shine but the team say it is powered by the black hole.

The system is called a microquaser as it is similar in structure to active galaxies called quasars with monstrous black holes that shoot jets tens of thousands of light years.

The system has been dubbed SS 433 and consists of a giant star with about 30 times the mass of our sun and a black hole with about 10 to 20 solar masses.

The two objects are orbiting each other with a period of 13 days, while the black hole sucks matter from the giant star.

‘This material accumulates in an accretion disc before falling into the black hole, like water in the whirl above the drain of a bath tub,’ explains study author Jian Li.

‘Part of that matter does not fall down the drain but shoots out at high speed in two narrow jets in opposite directions above and below the rotating accretion disk.’

This setting is known from active galaxies called quasars with monstrous black holes with millions of solar masses at their centres that shoot jets tens of thousands of light years into the cosmos.

As SS 433 looks like a scaled-down version of these quasars, it has been dubbed a micro quasar by the research team.

The high-speed particles and the ultra-strong magnetic fields in the jet produce X-rays and gamma rays, said Diego F. Torres from the Institute of Space Sciences.

‘The accretion disc does not lie exactly in the plane of the orbit of the two objects. It precesses, or sways, like a spinning top that has been set up slanted,’ he said.

‘As a consequence, the two jets spiral into the surrounding space, rather than just forming a straight line.’

The precession of the black hole’s jets has a period of about 162 days, according to the team who completed meticulous analysis.

This same analysis revealed a gamma-ray signal with the same period from a position located relatively far from the micro quasar’s jets.

The signal has been labelled as Fermi J1913+0515 by the scientists and is located at the position of an unremarkable gas enhancement.

Consistent periods indicate that this signal is powered by the micro quasar.

‘Finding an unambiguous connection via timing, 100 light years away from the micro quasar, not even along the direction of the jets is as unexpected as amazing,’ Li said.

‘But how the black hole can power the gas cloud’s heartbeat is unclear to us.’

Direct periodic illumination by the jet seems unlikely, the team explained, adding that they are working on trying to solve the mystery of the unexpected signal.

An alternative that the team explored is based on the impact of fast protons (the nuclei of hydrogen atoms) produced at the ends of the jets or near the black hole. 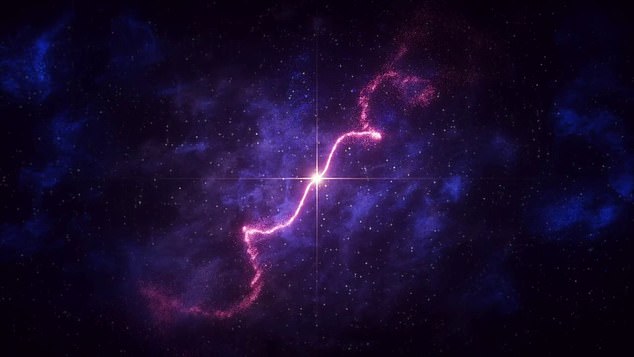 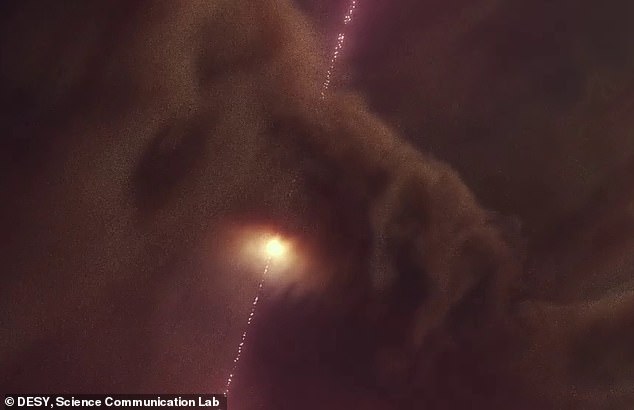 The precession of the black hole’s jets has a period of about 162 days, according to the team who completed meticulous analysis

They are then injected into the cloud, where these subatomic particles hit the gas and produce gamma rays.

Protons could also be part of an outflow of fast particles from the edge of the accretion disc, the team speculated.

Whenever this outflow strikes the gas cloud, it lights up in gamma rays, which would explain its strange heartbeat.

‘Energetically, the outflow from the disc could be as powerful as that of the jets and is believed to precess in solidarity with the rest of the system,’ explains Torres.

Further observations as well as theoretical work are required to fully explain the strange gamma-ray heartbeat of this unique system beyond this initial discovery.

‘SS 433 continues to amaze observers at all frequencies and theoreticians alike,’ emphasises Li.

‘And it is certain to provide a testbed for our ideas on cosmic-ray production and propagation near micro quasars for years to come.’

The discovery has been published in the journal Nature Astronomy.