Bombs away! Hyperion unveils hydrogen-powered car that can hit 220mph and go more than 1,000 miles on a single tank

A US automaker has just unveiled a new hydrogen-powered ‘supercar’ that can go more than 1,000 miles without needing to refuel.

The XP-1 from Hyperion revs up from zero to 60mph in a staggering 2.2 seconds, its manufacturer claims, reaching a top speed of more than 221mph – and the only thing it emits is water vapor.

The high-tech roadster is the product of nearly a decade of development, with all-wheel drive and a three-speed transmission.

When it rolls off the assembly line in 2022, it will join several other hydrogen-powered autos on the market, including the Honda Clarity, Toyota Mirai, and Hyundai Nexo. 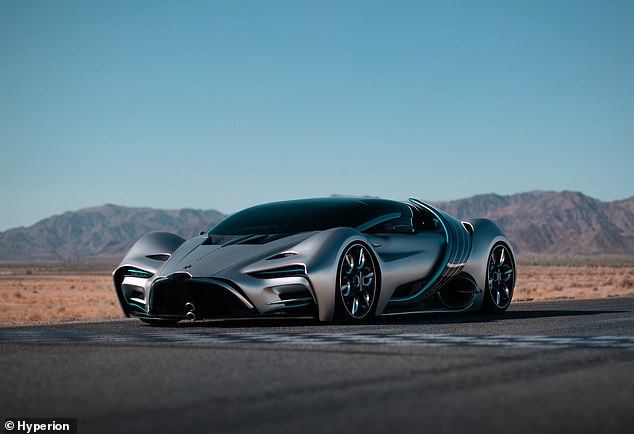 A new hydrogen-powered car can go 1,000 miles without stopping to refuel. The XP-1 from Hyperion goes from zero to 60mph in just 2.2 seconds and can reach top speeds of more than 221mph

Aerodynamic elements behind the swing-up doors help with high-speed cornering and double as solar panels that can change position to match the trajectory of the sun.

Inside the cabin, a 98-inch curved screen provides touch-free gesture controls and a wraparound glass canopy offers 360-degree view of the outside world.

Powered by hydrogen, the XP-1 is whisper-quiet compared to the latest gas guzzlers.

And it only needs a few minutes to refuel – far faster than the hours and hours a Tesla takes to completely charge up. 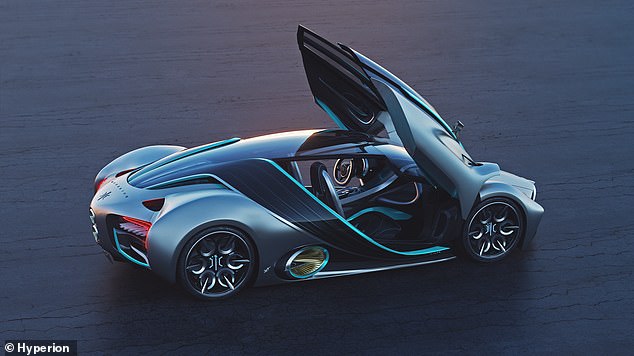 The high-tech roadster comes with swing up doors, all-wheel drive, and a three-speed transmission. Inside the cabin, a 98-inch curved screen provides touch-free gesture controls and a wraparound glass canopy offers 360-degree view of the outside world

Hydrogen-fueled cars are also less finicky in cold weather than their electric counterparts.

And the XP-1 stores energy in carbon fiber tanks rather than a hefty lithium-ion battery.

That – and its lightweight carbon-titanium chassis – keeps its weight down to a trim 2,275 pounds.

Hyperion hasn’t disclosed the XP-1’s sticker price, but it’s likely to be in the high six figures, Tech Xplore reports.

But separating hydrogen from oxygen is a laborious process that requires non-renewable resources like coal or natural gas. That undercuts its selling point as an environmentally friendly alternative.

Hydrogen is also highly flammable. Just ask anyone aboard the Hindenburg.

Hyperion CEO Angelo Kafantaris insists the California-based company has conquered the safety issue. ‘You can throw our tanks off a building or shoot them with a high-powered rifle. They won’t rupture,’ he said. 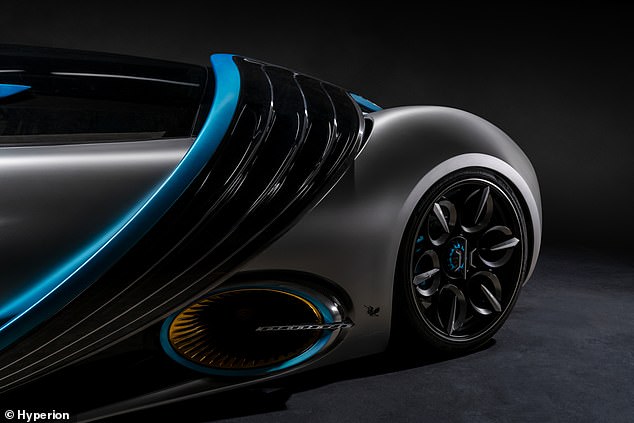 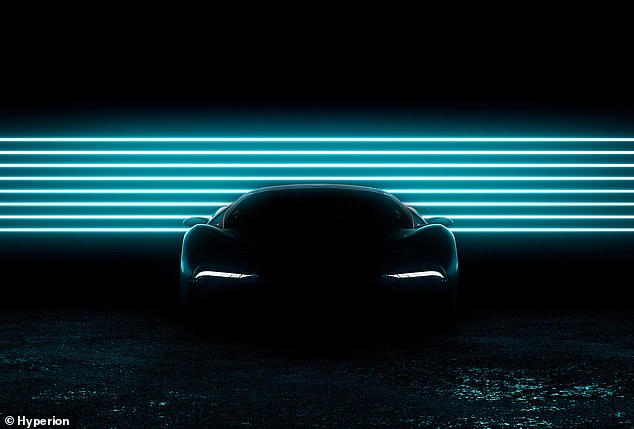 Powered by hydrogen, the XP-1 is whisper-quiet compared to the latest gas guzzlers. It takes just a few minutes to refuel and the only thing it emits is water vapor

And while the XP-1 is incredibly efficient, it will need to refuel at some point.

Right now there are only about 75 hydrogen fueling stations in North America, and more than half of them are in California.

Hyperion says it plans to construct a network of stations in the coming years. 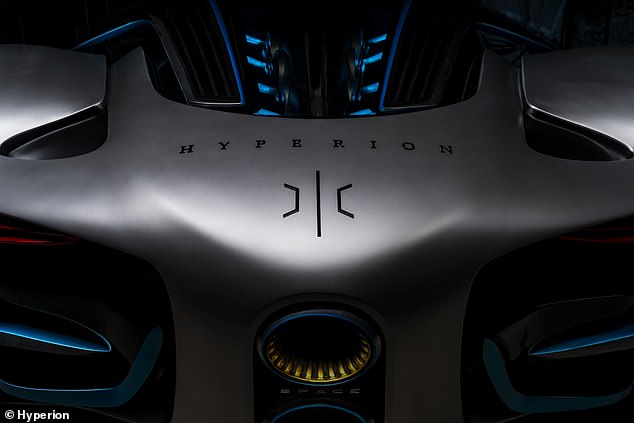 The XP-1 stores uses carbon fiber tanks to store energy rather than a hefty lithium-ion battery. That – and its lightweight carbon-titanium chassis – keeps its weight down to 2,275 pounds 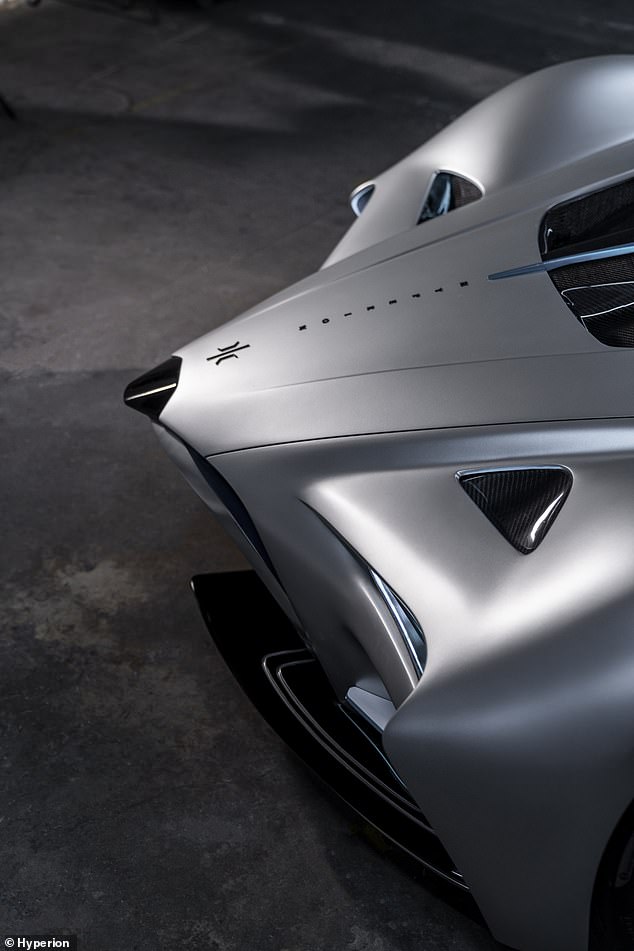 With a price tag estimated to be in the high six figures, only an extremely limited run of 300 cars are planned for the initial rollout in 2022.  ‘The XP-1 was partially designed to function as an educational tool for the masses,’ says Hyperion CEO Angelo Kafantaris.

Don’t expect to see the XP-1 in your supermarket parking lot anytime soon, though. Only an extremely limited run of 300 cars are planned for the initial rollout.

The big picture, says Kafantaris, is promoting hydrogen as a safe and efficient fuel source.

‘The XP-1 was partially designed to function as an educational tool for the masses,’ says Kafantaris.

‘Aerospace engineers have long understood the advantages of hydrogen as the most abundant, lightest element in the universe and now, with this vehicle, consumers will experience its extraordinary value proposition.’

HOW DO HYDROGEN FUEL CELLS WORK?

These ingredients are fused, releasing usable electricity and water as byproducts and making the technology one of the quietest and most environmentally friendly available.

Recent research has suggested hydrogen fuel cell cars could one day challenge electric cars in the race for pollution-free roads, however – but only if more stations are built to fuel them.

Fuel cell cars can be refueled as quickly as gasoline-powered cars and can also travel further between fill-ups.

Fuelling stations cost up to $2 million to build, so companies have been reluctant to build them unless more fuel cell cars are on the road.

The U.S. Department of Energy lists just 34 public hydrogen fuelling stations in the country; all but three are in California.

According to Information Trends, there were 6,475 FCV’s worldwide at the end of 2017.

More than half were registered in California, which puts the U.S. (53 per cent) at the forefront for FCV adoption.

Japan takes second place with 38 per cent, while Europe is at nine per cent.