A camera that spots the source of a cough has been built by Korean engineers.

It is able to track the exact location of a cough and record information about the culprit and monitor how many times they cough.

A sound camera was combined with a piece of software which digests all the data.

According to the academics who created it, the system could contribute to the prevention and early detection of epidemics in public places.

Ideal uses of the technology would be in hospitals to track any potential signs of infection among patients and healthcare workers. 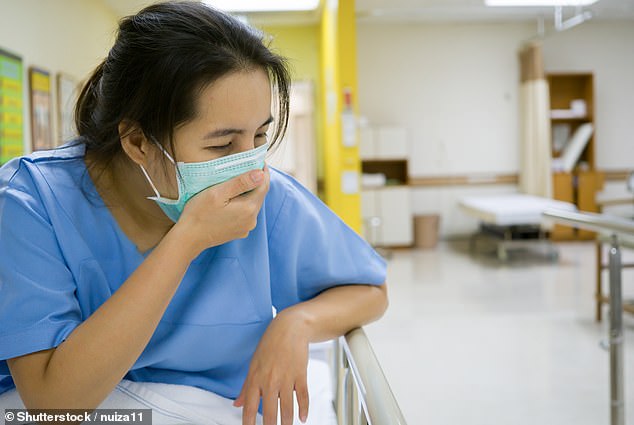 The Center for Noise and Vibration Control at KAIST announced that their coughing detection camera recognizes where coughing happens, visualizing the locations (stock)

Professor Yong-Hwa Park from the Department of Mechanical Engineering at KAIST said: ‘In a pandemic situation like we are experiencing with COVID-19, a cough detection camera can contribute to the prevention and early detection of epidemics in public places.

‘Especially when applied to a hospital room, the patient’s condition can be tracked 24 hours a day and support more accurate diagnoses while reducing the effort of the medical staff.’

Engineers developed the model to be able to classify a cough from just one second of sound.

Coughing and other noises, as well as background sounds, were all input to allow the model and it was still 87 per cent accurate.

When combined with a sound camera, the software can work out the direction of the incoming noise and label it as a cough.

The study states: ‘A pilot test of the cough recognition camera in an office environment shows that it successfully distinguishes cough events and other events even in a noisy environment.

‘In addition, it can track the location of the person who coughed and count the number of coughs in real time.’

Scientists suggest the software could be rolled out to public places such as schools, offices and restaurants to try and identify people who may be coughing frequently.

Everybody wearing face coverings in public could reduce a country’s Covid-19 death rate by five per cent, according to a study.

And if medical masks are given to the elderly and people currently sick with Covid-19, the effect doubles.

Applying this to the UK’s death toll of 41,329 suggests the strategy could have saved 10 per cent of the victims’ lives – a total of more than 4,000 individuals.

However, medical masks have not been widely available because of immense global demand and members of the public were advised against buying them up to make sure medical workers didn’t run out.

And wearing face coverings of any kind was not encouraged until June in the UK, months after the peak of the pandemic.

Mask-wearing of any kind among the public has been a contentious issue throughout the pandemic because officials said they would not advise it until there was clear evidence they worked – and proof that they do is still uncertain.