The ‘brightest material on Earth’ has been created after researchers found a way to stop fluorescent molecules fading when they are transferred to a solid state.

University of Copenhagen and Indiana University scientists created the new bright substance – that has a brilliant glow – from positively charged fluorescent dyes.

Dyes tend to undergo ‘quenching’ when they enter a solid state – decreasing the intensity of their fluorescence to produce a more subdued glow.

These SMILES mix a coloured dye with a colourless, star-shaped molecule that prevents the fluorescent molecules from interacting and allows them to stay bright.

The researchers say there are many possible uses for their new technology including in solar energy, lasers and even the storage of information. 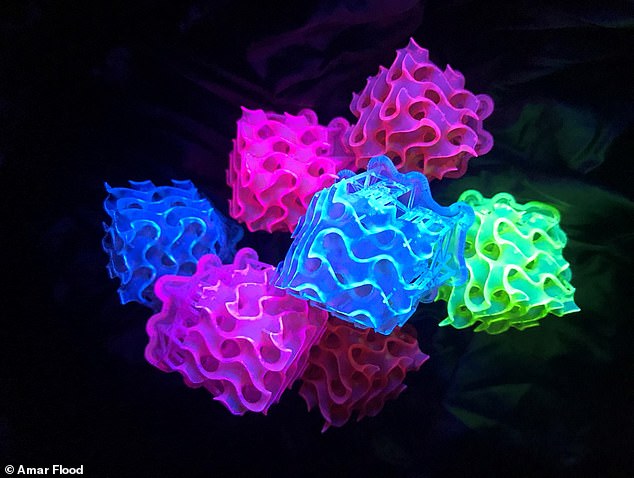 There are more than 100,000 different fluorescent dyes available, but almost none of the, can be mixed and matched in predictable ways to create solid materials.

That has changed thanks to the SMILES materials – which have potential applications in any technology that needs bright fluorescence, researchers explained.

They can also be used for applications that call for designing optical properties, including solar energy harvesting, bioimaging, and lasers.

Amar Flood, a chemist at Indiana University and co-senior author on the study along with Bo Laursen of the University of Copenhagen created the material.

‘Beyond these, there are interesting applications that include upconverting light to capture more of the solar spectrum in solar cells, said Flood.

It could also be used for light-switchable materials that are used for information storage and photochromic glass, he explained.

Dyes tend to undergo ‘quenching’ when they enter a solid state due to how they behave when packed close together, decreasing the intensity of their fluorescence to produce a more subdued glow.

‘The problem of quenching and inter-dye coupling emerges when the dyes stand shoulder-to-shoulder inside solids,’ says Flood.

‘They cannot help but ‘touch’ each other. Like young children sitting at story time, they interfere with each other and stop behaving as individuals.’

To overcome this problem, Flood and colleagues mixed a coloured dye with a colourless solution of cyanostar.

Cyanostar is a star-shaped macrocycle molecule that prevents the fluorescent molecules from interacting as it solidifies, keeping optical properties intact.

As the mixture became a solid, SMILES formed, which the researchers then grew into crystals, precipitated into dry powders, and finally spun into a thin film or incorporated directly into polymers. 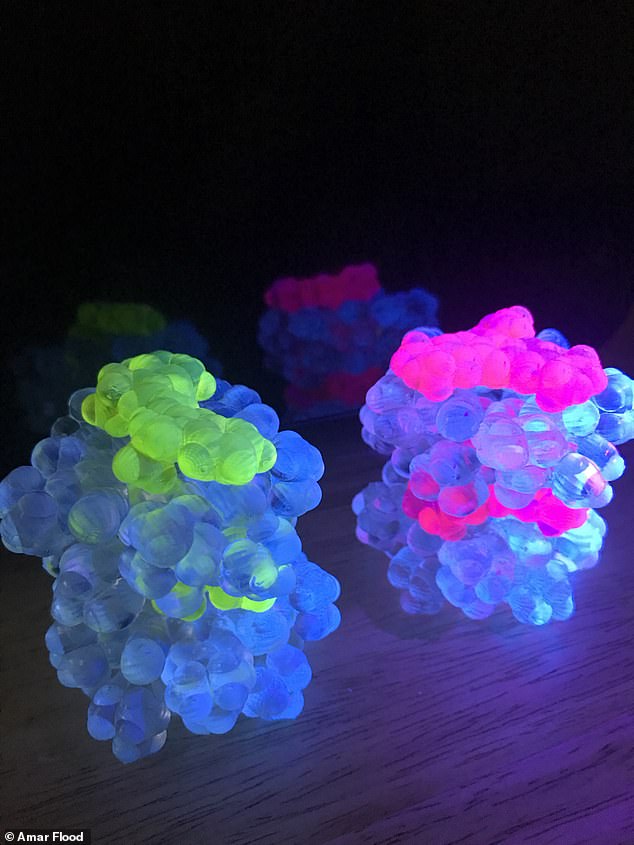 There are more than 100,000 different fluorescent dyes available, but almost none of the, can be mixed and matched in predictable ways to create solid materials

Since the cyanostar molecules form building blocks that generate a lattice-like checkerboard, the researchers could simply plug a dye into the lattice and, without any further adjustments, the structure would take on its colour and appearance.

While previous research had already developed an approach to spacing the dyes apart using macrocycle molecules, it relied on coloured macrocycles to do the job.

Flood and colleagues found that colourless macrocycles were key to keeping the original colour and brightness of fluorescent dyes.

‘Some people think that colorless macrocycles are unattractive, but they allowed the isolation lattice to fully express the bright fluorescence of the dyes unencumbered by the colors of the macrocycles,’ says Flood. 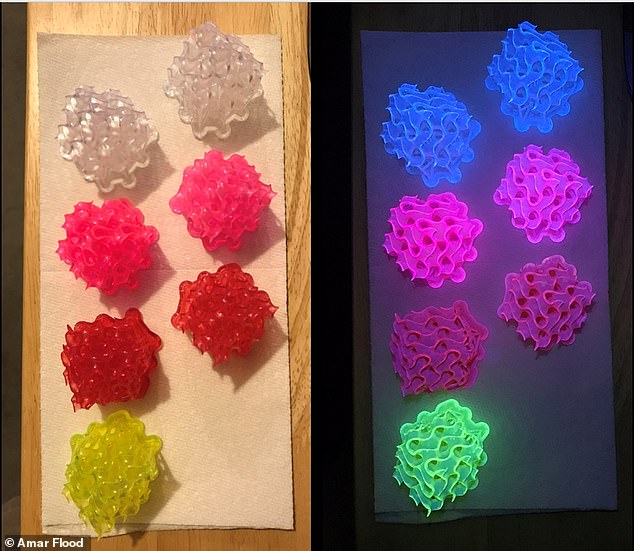 This image shows how 3D printed gyroids made with SMILES materials are coloured under white light and fluoresce brightly under UV.

Next, the researchers plan to explore the properties of fluorescent materials formed using this novel technique, enabling them to work with dye makers in the future to realise the materials’ full potential in a variety of different applications.

‘These materials are totally new, so we do not know which of their innate properties are actually going to offer superior functionality,’ says Flood.

‘We also do not know the materials’ limits. So, we will develop a fundamental understanding of how they work, providing a robust set of design rules for making new properties.

‘This is critical for putting these materials into the hands of others–we want to pursue crowd sourcing and to work with others in this effort.’

The research has been published in the Cell Press journal Chem.