Eating too much rice could be fatal as low levels of arsenic in the grains can increase your risk of dying from heart disease, study warns

Scientists have found that eating a lot of rice increases the risk of dying from heart disease due to the naturally-occuring arsenic in the crop.

Britons in the top 25 per cent of rice consumption are at six per cent increased risk of dying from cardiovascular disease than the bottom quarter, a study found.

The chemical gathers naturally in the crop and has repeatedly been linked to illness, dietary-related cancers and liver disease. In serious cases, it can result in death.

Rice is a staple of diets around the world and is relied upon by millions of people in developing countries to provide valuable calories and nutrients.

Globally, it has been estimated that arsenic in rice is to blame for over 50,000 avoidable premature deaths per year. 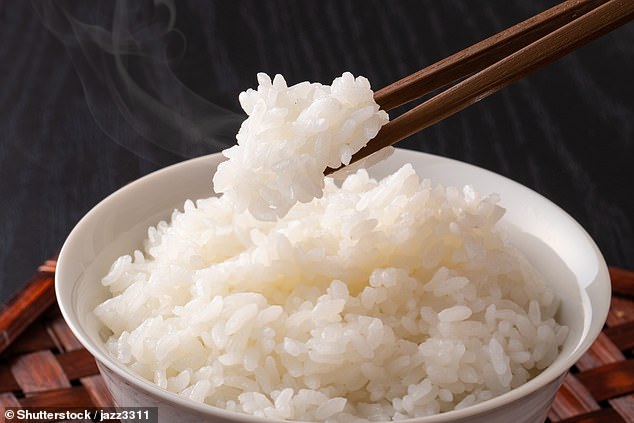 Arsenic is a toxic chemical which, in high enough doses, can cause serious health issues. It is found naturally in rice (pictured) and research has now proved that eating lots of rise increases the risk of dying from heart disease by six per cent

Arsenic occurs naturally in the soil and is increased in locations that have used arsenic-based herbicides or water laced with the toxin for irrigation purposes.

Rice is grown under flooded conditions and this draws arsenic out of the soil and into the water, ahead of eventual absorption by the plants.

Rice is particularly vulnerable because arsenic mimics other chemicals the plant absorbed via its root system, allowing the toxin to bypass the plant’s defences.

Rising temperatures caused by global warming could cause the amount of arsenic in rice to triple by the end of the century, a new study warns.

Scientists at the University of Washington in the US grew rice and replicated various temperatures to mimic growing conditions under various global warming projections.

Plants grown in warmer conditions were found to have higher levels of arsenic throughout the plant – including the grains.

Researchers at the universities of Manchester and Salford studied rice consumption in England and Wales and the prevalence of cardiovascular diseases caused by arsenic exposure.

Academics tweaked the data to account for other factors known to contribute to cardiovascular disease, such as obesity, smoking and age.

He explains the likely increased risk for the top quartile is around six per cent, and is almost definitely between two and 11 per cent.

The researchers say their study is limited but is inexpensive to conduct and more specialised investigations are needed to confirm any link.

They also say that people should not avoid eating rice all together, as it does offer many health benefits due to its high fibre content.

Instead, people should consider opting for rice varieties which are low in arsenic levels, such as basmati, rather than whole grain.

The findings are available in the journal Science of the Total Environment.