A Japanese beetle survives being eaten by a frog more than 90 per cent of the time by squeezing out of its predator’s rectum.

Incredible footage shows a small aquatic beetle being squeezed from the rear end of the black-spotted frog nearly two hours after being eaten in lab experiments.

Out of 15 experiments with the Regimbartia attenuata beetle species, 14 escaped from the frog’s rectum unharmed and started scuttling around the glass tank.

Japanese researchers fed 13 other beetle species to the frog, all of which did not survive, meaning R. attenuata may promote frog excretion to facilitate its escape unharmed.

This study claims to be the first to report the successful escape of prey insects from the vent of a predator.

‘Of the beetles excreted by frogs, 94.4 per cent survived for at least 2 weeks following excretion,’ Dr Shinji Sugiura, an ecologist at Kobe University, told MailOnline

‘Therefore, the costs of escaping from inside frogs may be lower than we expected.’

After excretion, some of the frogs did not know that the beetles were still alive, while others attacked the beetles again, he said.

Many frog species lack teeth and are unable to kill prey before swallowing it, relying on their digestive systems to break down its food.

But animals such as beetles can evolve to develop techniques that see their survival through a digestive tract, taking advantage of the fact they are not initially crushed to death by teeth.

To investigate the defences of insects against frogs, Dr Sugiura provided various species of frog with different insect species to feed on in lab conditions.

Adult beetles with a body length of between 0.14 to 0.19 inches were fed to juvenile and adult frogs, ranging from 0.8 inches to 2.9 inches in a glass tank.

Each species has a different habitat – for example, R. attenuata prefers open wetlands such as paddy fields, which the black-spotted frog (Pelophylax nigromaculatus) also inhabits.

All the beetles were easily swallowed by the frogs – however, 93.3 per cent of the R. attenuata beetles, or 14 our of 15, were excreted within six hours after being swallowed and survived the journey. 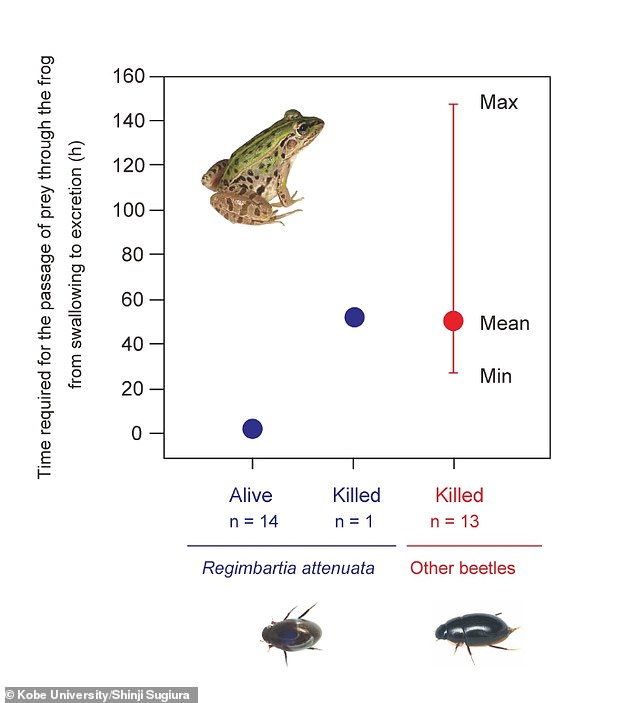 Time required for the passage of R. and other beetles through the black-spotted frog (Pelophylax nigromaculatus), from swallowing to excretion

The single R. attenuata beetle that did not survive from the black-spotted frog was excreted as faeces more than 24 hours after being swallowed.

These observations indicate that swallowed R. attenuata beetles move toward the frog vent through the digestive system.

Because the frog’s sphincter muscle pressure keeps the vent closed, the tiny beetles are unable to exit through the vent without inducing the frog to open it.

Survival in the extreme pH and anaerobic conditions of the predator digestive tract depends on the speed of passage and activity of the prey.

This ‘lethal environment’ may impose selective pressures on the beetle’s evolution to devise quick and active escape tactics over time.

To investigate further, beetle legs were experimentally ﬁxed with sticky wax before they were eaten.

All of the treated beetles were killed in the frogs’ digestive system and ﬁnally excreted more than 24 hours after consumption.

Therefore, swallowed beetles likely used their legs to move through the digestive tract toward the frog vent, hastening their excretion by the frogs, Dr Sugiura said.

The same behaviour was observed when R. attenuata was swallowed by four other frog species – the Daruma pond frog, Japanese wrinkled frog, Japanese rice frog and the Japanese tree frog. 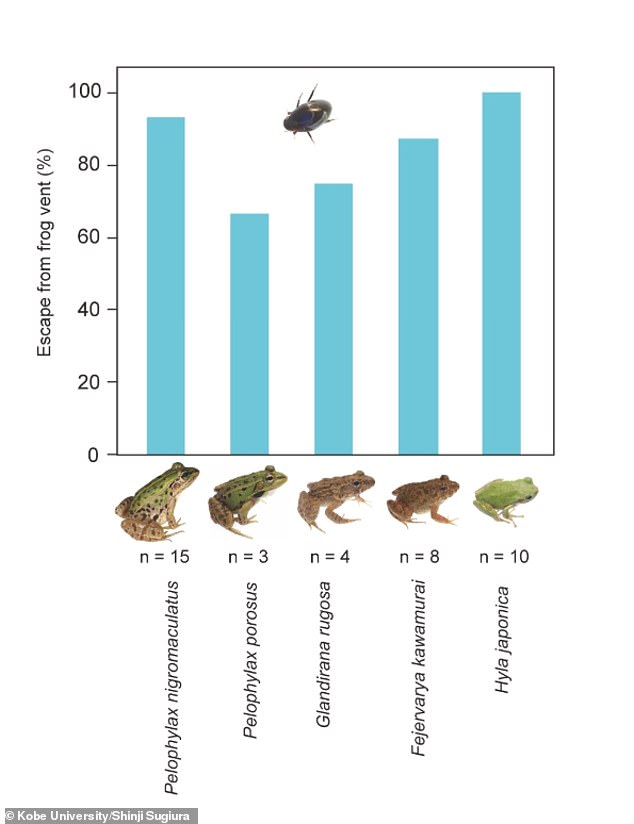 ‘R. attenuate may more frequently escape from small-sized frogs because the digestive systems of small frogs are shorter than those of large frogs,’ Dr Sugiura said.

‘Further experiments are needed to test this hypothesis.’

The study has been published in Current Biology.