The UFO or unidentified flying object could be headed towards a secret base below the active volcano, a UFO hunter has claimed. The flying saucer-shaped anomaly was filmed by an eyewitness back in February. At first glance, the footage appears to show a lenticular cloud set aglow by the Sun.

But conspiracy theorist and UFO aficionado Scott C Waring believes an alien spaceship is hidden inside of the cloud.

Mr Waring said: “This is some still photography made into a video and its more than breathtaking, it’s 100 percent evidence that aliens hide ships inside clouds.

“This particular cloud actually glows from within itself.

“Dark on the top and dark on the bottom, the light emanates through its sides glowing a bright yellow. 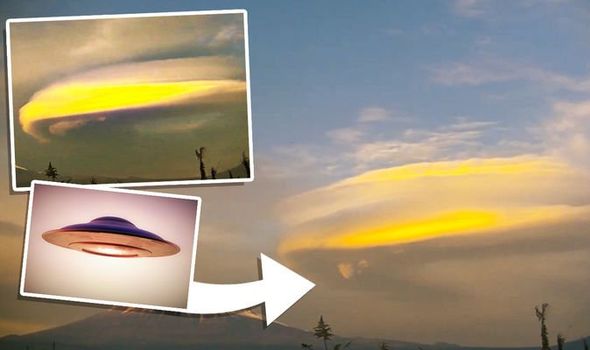 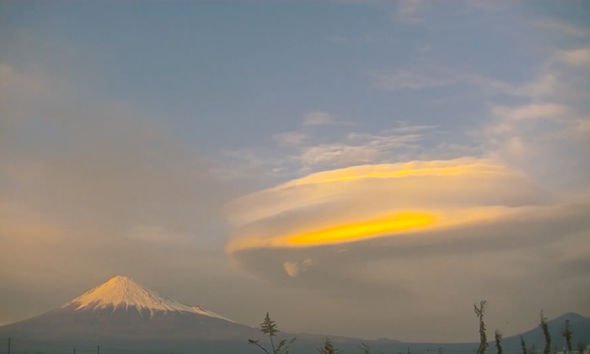 “Although it was recorded back in February, this is one remarkable sighting and extraordinary proof that alien ships form clouds around them.”

In this case, he thinks the alien base sits some three to four miles below the surface.

The UFO hunter said: “Today its less easy for them to go unseen, since video recorders, live cams and cell phones exist.

“With this technology so common and in the hands of most of the public, it’s just a matter of time before the world governments come out and reveal the truth… that aliens exist.”

However, according to the UK Met Office, lenticular clouds are perfectly natural and form when the air is stable and wind blows over hills and mountain from the same direction but at different heights.

The phenomenon can give the clouds a flying-saucer-like shape, with multiple curved layers.

This type of cloud is rarely seen in the UK but they form downwind of hills or mountains. 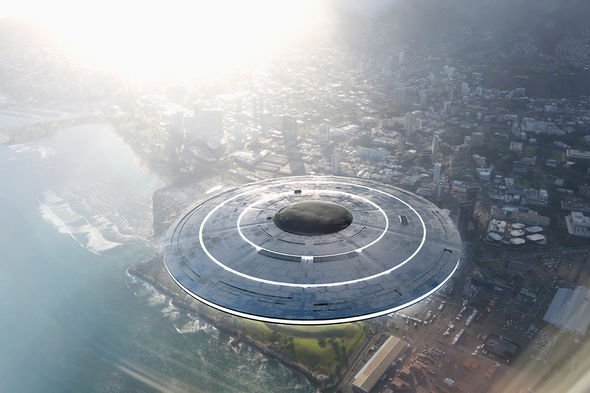 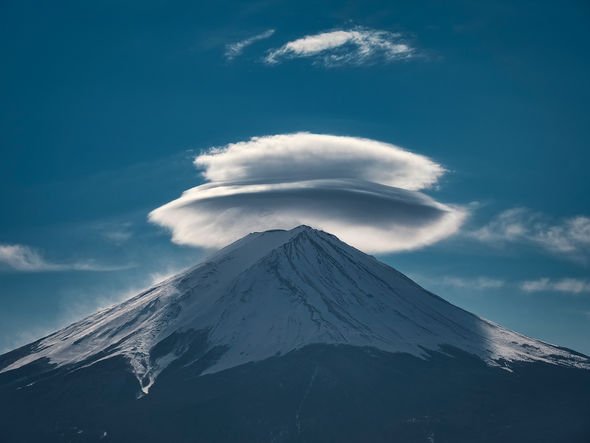 The Met Office said: “They look a lot like the traditional shape of flying saucers in science fiction, and real lenticular clouds are believed to be one of the most common explanations for UFO sightings across the world.”

According to astronomer Deborah Byrd of EarthSky.org, the clouds can appear and disappear and reappear relatively quickly.

She said: “Plus they’re not familiar to people who live in low-lying or flat terrain.”

But why would anyone confuse the clouds for alien UFOs?

The most likely cause is pareidolia, which is a trick bizarre tick of the mind and a form of apophenia.

Pareidolia causes people to see shapes and patterns in inanimate objects, such as animals in clouds or faces in car bumpers.

The US space agency NASA said: “Pareidolia is the psychological phenomenon where people see recognizable shapes in clouds, rock formations, or otherwise unrelated objects or data.