Earth and the Moon were bombarded with meteoroids 800 million years ago just as complex life was getting started, lunar craters reveal

Just as the first signs of complex life were taking hold on the Earth 800 million years ago, meteoroids were bombarding the planet and its Moon, lunar craters show.

A team from Osaka University used data gathered by the Terrain Camera on the Kaguya lunar orbiter spacecraft to determine the age of 59 different craters.

Unlike the Earth, the Moon doesn’t suffer from erosion, which makes it easier for scientists to find, examine and accurately date asteroid collisions on its surface.

The Japanese team say the craters they studied were created at the same time, 800 million years ago, when a shower of large meteoroids struck the Earth and Moon.

They created 12-mile-wide craters on the Moon, but on Earth they triggered tsunamis, wildfires and introduced large amounts of phosphorous – a key building block of life. 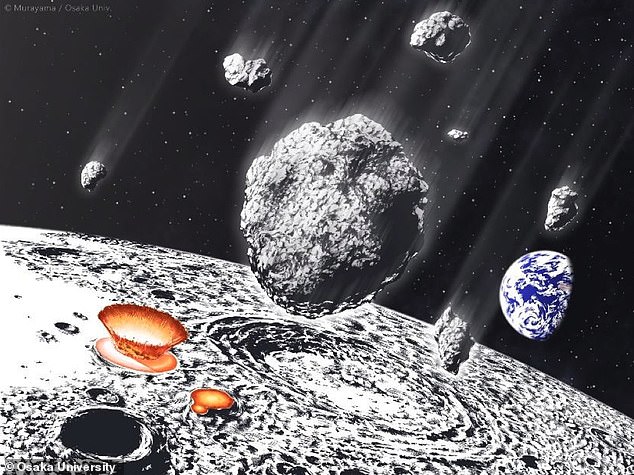 The meteoroids were produced when a giant 62-mile-wide asteroid broke up into dozens of smaller rocks deeper in the solar system, according to the research team.

Earth was showered with 110 million billion pounds of debris – up to 60 times more than the city-sized space rock that wiped out the dinosaurs.

The mass bombardment that hit the Earth and the Moon happened just as the first land plants and the origins of multi-cellular animals were evolving.

Lead author Professor Kentaro Terada, of Osaka University, said this was an era of great environmental change on the Earth – immediately before the Cryogenian.

The relentless bombardment described in Nature Communications could have kick-started life on Earth due to it bringing the life-giving chemical phosphorous.

PHOSPHOROUS: A KEY BUILDING BLOCK OF LIFE THAT MAY HAVE ARRIVED FROM SPACE

Though nowhere near as abundant on Earth as carbon, hydrogen or oxygen, phosphorous is one of the key elements to life on our planet.

It helps form the backbone of the long chains of nucleotides that make up DNA – the building blocks of biological life as we know it.

Phosphorous is also vital to cell membranes and the cell energy-carrying molecule ATP.

Phosphorous likely came to Earth aboard meteorites millions or even billions of years ago.

The meteorites are believed to have contained a phosphorus-bearing mineral called schreibersite.

Impact craters on Earth created before 600 million years ago have been erased by erosion, volcanism and other geologic processes.

So to find out about ancient meteorites, Terada and his team investigated the Moon where there is no weathering or erosion due to its lack of an atmosphere.

They discovered eight out of the 59 craters they looked at were formed simultaneously – including the dramatic 60-mile wide Copernicus crater.

They based their results on radiometric dating of ejected material from Copernicus and information obtained from glassy beads collected during the Apollo missions.

Though nowhere near as abundant on Earth as carbon, hydrogen or oxygen, phosphorous is one of the key elements to life on our planet.

Prof Terada said: ‘An asteroid shower may have brought a large amount of phosphorus to the Earth – affecting the terrestrial surface environment.’

It helps form the backbone of the long chains of nucleotides that make up DNA – the building blocks of biological life as we know it.

Phosphorous is also vital to cell membranes and the cell energy-carrying molecule ATP and it has been suggested for years it came to Earth on a meteorite.

‘Understanding meteoroid bombardment of the Earth system is an issue of both great scientific interest and practical importance because impacts are potentially hazardous to the Earth,’ said Terada. 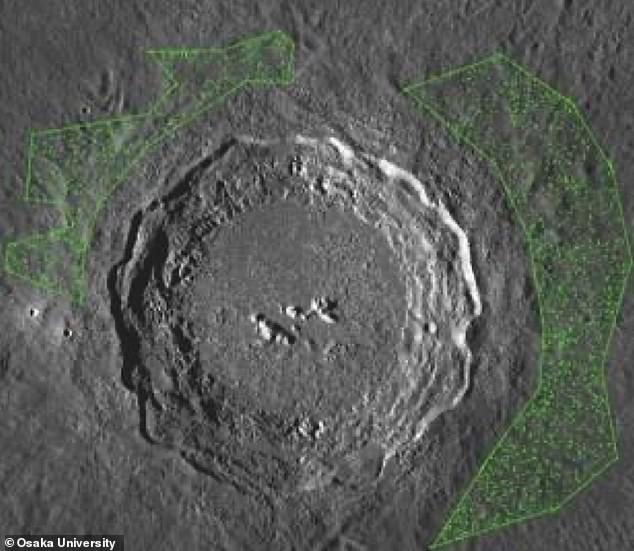 They created 12 mile wide craters on the Moon but on Earth it triggered tsunamis, wildfires and introduced large amounts of phosphorous – a key building block of life

The Cambrian explosion, a rapid evolutionary event that resulted in the divergence of major animal groups, happened 541 million years ago.

Since then at least five mass extinctions have occurred – with asteroid impacts considered a major cause. But they can be good for life – as well as bad.

Terada said: ‘Lunar crater chronology provides new insight into external forcing from asteroids that might have driven ecosystems towards larger and increasingly complex organisms after 800 million years ago.’

The findings have been published in the journal Nature Communications.

Five times, a vast majority of the world’s life has been snuffed out in what have been called mass extinctions.

End-Ordovician mass extinction
The first of the traditional big five extinction events, around 540 million years ago, was probably the second most severe. Virtually all life was in the sea at the time and around 85% of these species vanished.

Five times, a vast majority of the world’s life has been snuffed out in what have been called mass extinctions. The most famous may be the End-Cretaceous, which wiped out the dinosaurs. Artist’s impression

End-Permian mass extinction (the Great Dying)
The largest extinction event and the one that affected the Earth’s ecology most profoundly took place 252 million years ago. As much as 97% of species that leave a fossil record disappeared forever.

End-Triassic mass extinction
Dinosaurs first appeared in the Early Triassic, but large amphibians and mammal-like reptiles were the dominant land animals. The rapid mass extinction that occurred 201 million years ago changed that.

An asteroid slammed down on Earth 66 million years ago, and is often blamed for ending the reign of the dinosaurs.