British countryside is ‘becoming less fertile’ with nearly 40 per cent of arable soils in England and Wales ‘degraded’ due to loss of carbon, study shows

Arable soils in England and Wales are becoming less fertile, according to a new study.

Almost 40 per cent of arable soils are being ‘degraded’, meaning they have too much clay and not enough carbon or organic matter.

Arable soils are suffering from regular ploughing when not enough organic matter being is added, which is essential for plants to obtain nutrients as they grow.

Organic matter is composed of organic compounds that have come from the remains of plants and animals and their waste products.

The findings are based on a new ‘soil health index’ that classifies soils by the proportion of organic matter they contain compared with clay, which is too dense and compact to generally be suited to plant growth.

Researchers say the index is a good predictor of how much carbon soils can take up and store and a general indicator of how well they are functioning.

It could help farmers or policymakers improve the natural services soils provide, such as food production, flood protection and carbon storage. 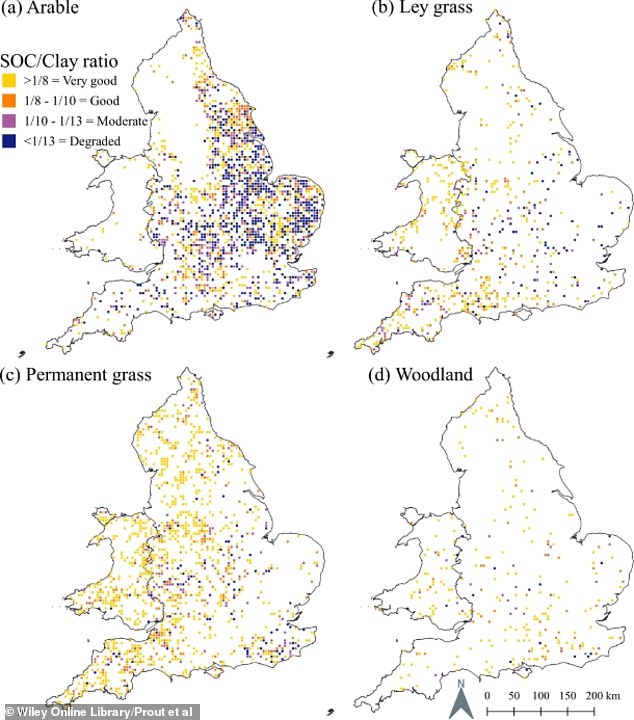 Scientists led by Rothamsted Research have developed an easy to use ‘soil health’ measure that shows for the first time that 38.2 per cent of arable soils in England and Wales are degraded. Maps of soil organic carbon (SOC)/clay ratio across England and Wales under (a) arable land, (b) ley grass, (c) permanent grass and (d) woodland, with colours relating to findings of the index

Soil is described by the WWF as ‘the earth’s fragile skin that anchors all life on Earth’, but mass-produced plants in agriculture, including cotton, palm oil, soybean and wheat, increase soil erosion ‘beyond the soil’s ability to maintain itself’.

The UN previously warned that the world’s soils are rapidly deteriorating due to soil erosion, nutrient depletion, loss of soil organic carbon and other threats.

WHAT IS SOIL DEGRADATION?

Soil degradation is the physical, chemical and biological decline in soil quality.

It can be the loss of organic matter, decline in soil fertility and structural condition.

It’s also caused by adverse changes in salinity, acidity or alkalinity, and the effects of toxic chemicals, pollutants or excessive flooding.

The decline in soil condition is caused by its improper use or poor management, usually for agricultural, industrial or urban purposes

According to the UN’s Food and Agricultural Organisation, a third of the world’s soil is now moderately to highly degraded.

As a major storehouse for carbon, soils help regulate emissions of carbon dioxide and other greenhouse gases, which also makes it fundamental for regulating the climate.

‘Soil carbon is vital for the proper functioning of soil, but its absolute value alone is not always a true reflection of a soil’s health due to the very varied nature of different soils,’ said study lead author Jonah Prout at the Rothamsted Research institution in Hertfordshire, where the index was developed.

‘By analysing a wide range of soils from across England and Wales, we were able to test this index as an indicator of soil structure – of key importance to soil functioning – and a measure of whether a soil needs improving.’

The data behind the index is based on more than 3,800 soils collected between 1978 and 1983 as part of a national soil survey.

The index is calculated by measuring the proportion of soil carbon to soil clay, with samples then categorised based on this value as ‘very good’, ‘good’, ‘moderate’ or ‘degraded’.

Soils where there is at least 13 times more clay than carbon are rated as ‘degraded’, while those with less than eight times the amount of clay compared to carbon are regarded as ‘very good’.

Using this scale, the team found 38.2 per cent of arable soils in England and Wales – soil that can be ploughed and used to grow crops – are degraded. 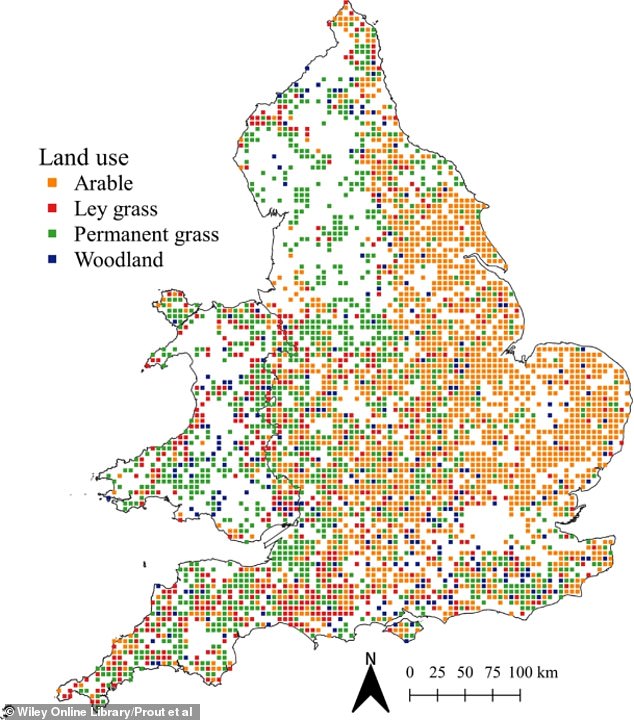 Map of arable, ley grass, permanent grass and woodland sites in the National Soil Inventory sampled between 1978 and 1983 (number of samples = 3,809)

Overall, arable soils and soils receiving less annual rainfall were most likely to be physically degraded.

The ratings are largely independent of climate, soil type or the type and amount of vegetation growing on it and provide a  reliable indication of the status of the soil.

The index is also based on two routinely taken soil measurements and could be easily established for any field in England and Wales.

And given the wide range of soils and land uses across England and Wales in the dataset used to test the index, it should apply to other European soils in similar climate zones. 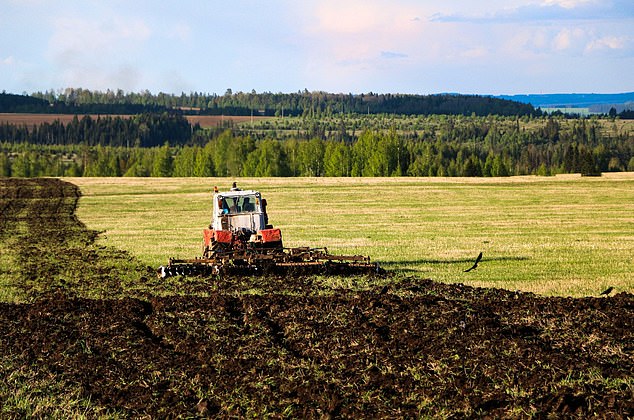 The data behind the index is based on more than 3,800 soils collected between 1978 and 1983 as part of a national soil survey

‘Previously no one could tell you what a good level of organic matter for a particular soil was,’ said study co-author Professor Steve McGrath at Rothamsted Research, which is one of the oldest agricultural research institutions in the world.

‘An index allows farmers and other land managers to determine how best to manage their land – where to grow, where to treat, and where to build – depending on the state of their soil.

‘There are various ways to improve a soil, but to do so, we first need to know which ones need what help. This measure is an easy way to do so.’

The next part of the project at the Rothamsted Research will look at a later survey and long-term experiment data to see how the index values have changed over time.

The study has been published in the European Journal of Soil Science. 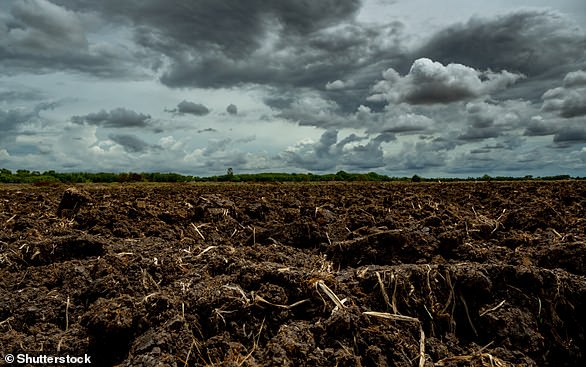 When managed sustainably, soils can play an important role in climate change mitigation by storing carbon (carbon sequestration) and decreasing greenhouse gas emissions in the atmosphere.

But if soils are managed poorly or cultivated through unsustainable agricultural practices, soil carbon can be released into the atmosphere in the form of carbon dioxide (CO2), which can contribute to climate change.

The steady conversion of grassland and forestland to cropland and grazing lands over the past several centuries has resulted in historic losses of soil carbon worldwide.

However, by restoring degraded soils and adopting soil conservation practices, there is major potential to decrease the emission of greenhouse gases from agriculture, enhance carbon sequestration and build resilience to climate change.

If land is farmed in a more sustainable way, carbon could be absorbed back into the soils, making them a carbon sink.

Experts say any genuine plan to combat climate change must tackle the state of the land and production of food.

This means putting a stop to degrading soils – vital for production of food, timber and plant material for a growing global population.