Salisbury Cathedral has installed 93 solar panels on its roof in a bid to become carbon-neutral in the next decade.

The panels will provide 33,708 kilowatt hours of clean energy to Salisbury Cathedral and reduce its carbon footprint by 11,764kg per year.

The installation of the panels, which will produce a total of 37kw of energy, is another step towards the cathedral’s aim of being carbon neutral by 2030.

The efforts form are part of a wider mission by the Church of England to offset its carbon emissions by the end of the decade. 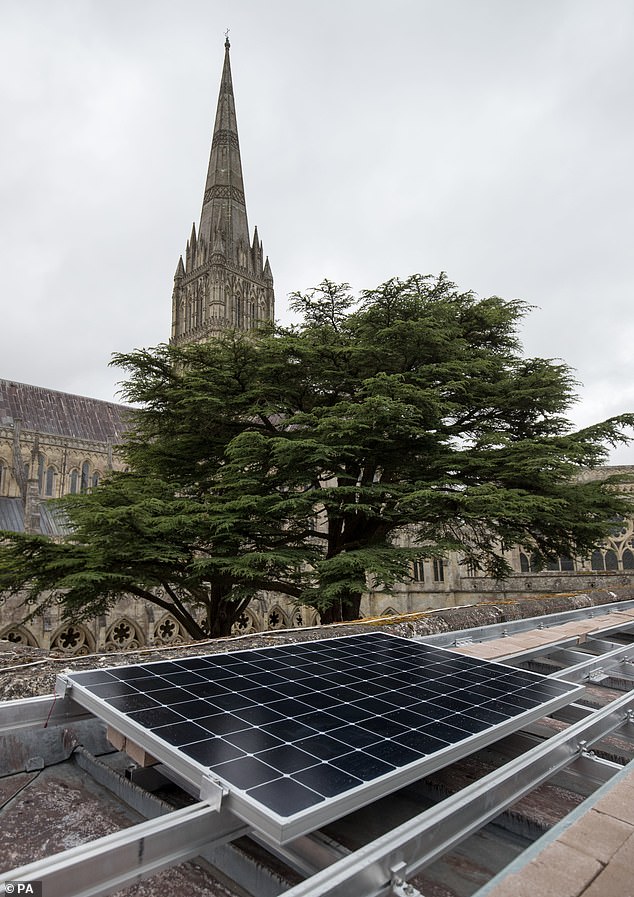 A solar panel is installed on the roof of Salisbury Cathedral’s south cloister, as part of the cathedral’s plans to be carbon neutral

Removing carbon oxide from the atmosphere and then storing it is known as carbon sequestration.

In order to achieve net zero emissions, all worldwide greenhouse gas emissions will have to be counterbalanced by carbon sequestration.

Renewable sources of energy like solar and wind have low carbon footprints.

The Right Reverend Nicholas Holtam, Bishop of Salisbury, climbed onto the 35-foot-high (10-metre) roof of the south cloister to see the 93 panels being installed.

‘The Church of England is working hard towards a net-zero carbon footprint by 2030,’ he said.

‘As the Church of England’s lead bishop for the environment, I am delighted that Salisbury Cathedral is making a contribution that takes us towards this.

‘With clear purpose and helpful partnerships, even iconic buildings can make a difference towards sustainability.

‘In these strange times the possibilities of living differently seem all the more important and this project even more significant.’

The panels cannot be seen from the ground and only visitors climbing the 332 steps up Britain’s tallest spire will get a glimpse of them.

The bishop has recently signed a letter to the government asking for the environment to be part of its post-Covid-19 plans.

The solar project has been under development since 2017 when Salisbury Community Energy approached the cathedral about a possible installation.

The panels are collectively owned by small, local and ethical investors who want to encourage more renewable energy generation. 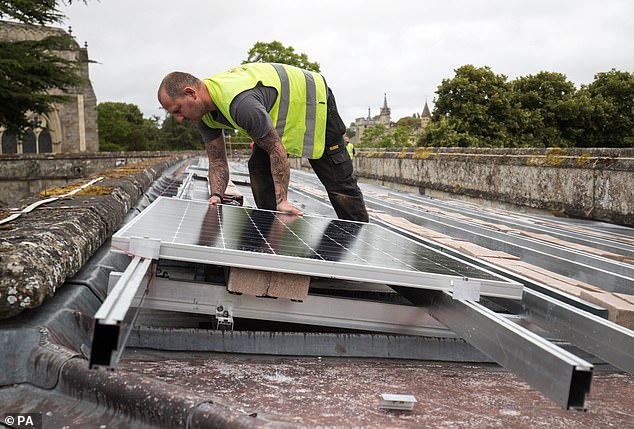 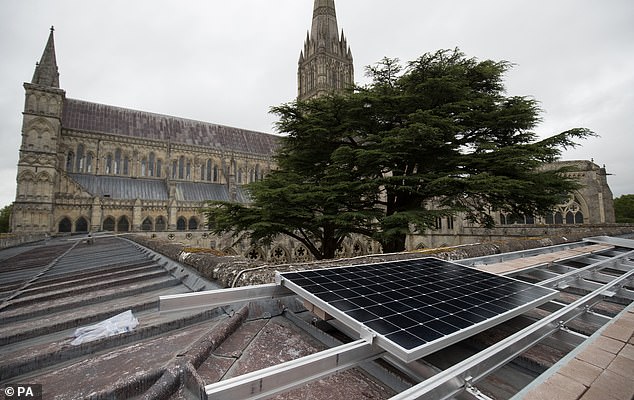 The panels will provide 33,708 kWh of clean energy to Salisbury Cathedral and reducing its carbon footprint by 11,764 kilograms per year

‘We are delighted to have been able to work with our partners to make this installation happen,’ said Thomas Burnett, a director of the not-for-profit Salisbury Community Energy.

‘It was always a very important site for Salisbury Community Energy as it sends a strong message. ‘We hope it will galvanise others to follow suit.’

The Wiltshire cathedral, which started construction in the year 1220 under the reign of Henry III, already offers its visitors a chance to play a part in its ‘eco-characteristics’ for the future with a short survey.

‘We must lay the foundation while we may not know exactly how to build the ceiling.’ 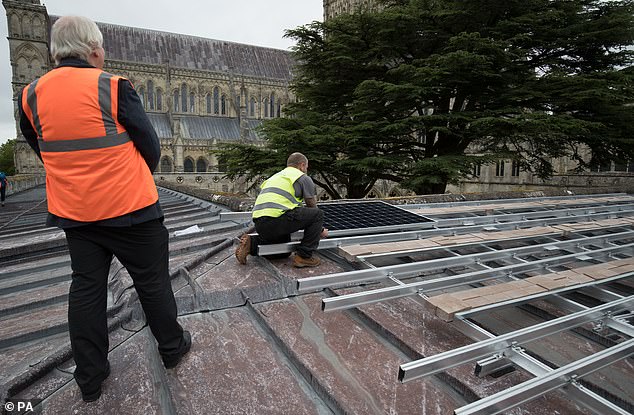 The Rt Rev Nicholas Holtam, Bishop of Salisbury (left), stands on the roof of Salisbury Cathedral’s south cloister viewing the new solar panels which are being installed as part of the cathedral’s plans to be carbon neutral 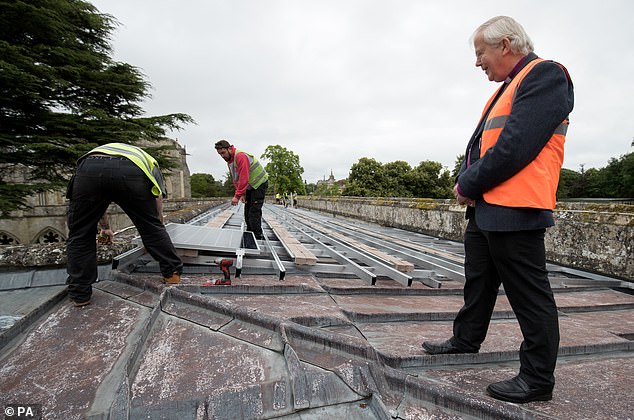 The Rt Rev Nicholas Holtam, Bishop of Salisbury (right), stands on the roof as the panels are installed

Salisbury Cathedral says the world is ‘on notice to make the changes required to avoid irreversible harm to life on Earth’.

‘This will requires action at every level, from the global to the personal, and we in the Salisbury Cathedral community are anxious to play our full part.’

The Church of England has already revealed that it wants to go carbon neutral by the year 2030 by making adjustments to its 40,000 buildings.

Methods to make this a reality could potentially include replacing central heating  with heated pew cushions. 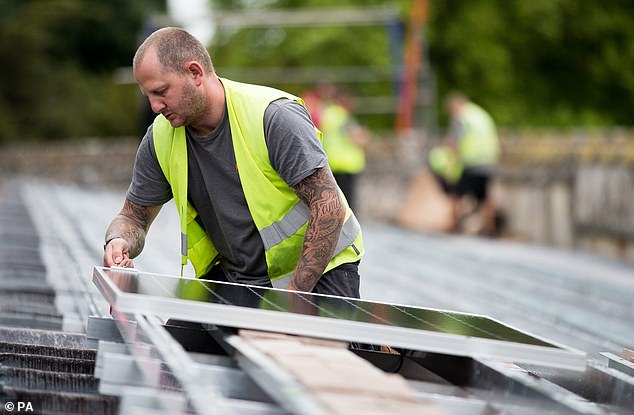 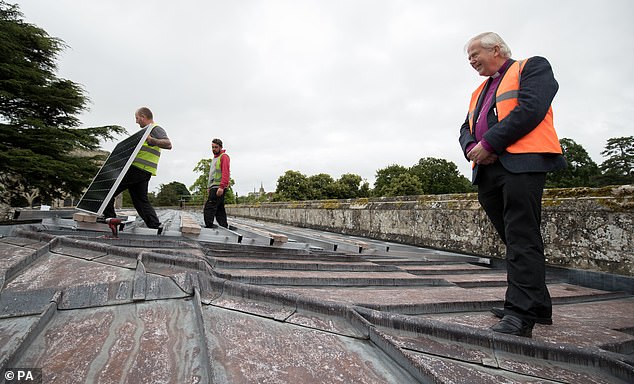 The Rt Rev Nicholas Holtam,  (right) climbed onto the 35-foot-high roof of the south cloister to see the 93 panels.

This will focus more on the comfort of individual church users rather than heating the surrounding air and therefore cut heat loss.

The Church of England also wants to change its heating systems away from oil and gas, install energy efficient lighting, plant more orchards in church grounds, discourage bishops from taking flights and generate its own electricity from renewables ‘where appropriate’.

‘It’s our sacred duty to protect the natural world we’ve so generously been given, as well as our neighbours around the world who will be first and worst affected,’ said  Archbishop of Canterbury Justin Welby.

‘Without swift decisive action the consequences of climate change will be devastating.’

The Church said it ‘needs to build ecological awareness’ into everything its does  because ‘caring for creation is part of its mission and ministry’.

WHAT IS SOLAR POWER?

Solar power is the conversion of energy from sunlight into electricity.

Photovoltaics — the kind of solar panel you might see built into a calculator — are capable of directly converting light into electrical power.

In concentrated solar power systems, however, mirrors or lenses are first used to collect the sunlight that falls on a large area and focus it — creating heat that can be used to drive a steam turbine and generate electricity.

Optimum locations for solar farms include the arid tropics and subtropics, with deserts lying at such low latitudes often being cloudless and getting around 10 hours of sunlight each day.

According to NASA, the eastern part of the Sahara — the Libyan Desert — is the sunniest place on the Earth.

Solar power accounted for 1.7 per cent of the world’s electricity production in 2017, and has been growing at a rate of 35 per cent each year.