New study shows gold mining in the Amazon is leeching nitrogen out of the soil, raising mercury concentrations and stopping new trees from growing for years

Deforestation is threatening the Amazon rainforest both from above and below ground.

A new study from researchers at the University of Leeds has found that gold mining in the Amazon leeches nutrients from the soil and pollutes the surrounding area with mercury.

According to the team, sites of former gold mines saw some of the lowest forest recovery rates ever recorded in rainforest terrain, and some former sites remained unable to grow new trees for up to four years after the mines closed. 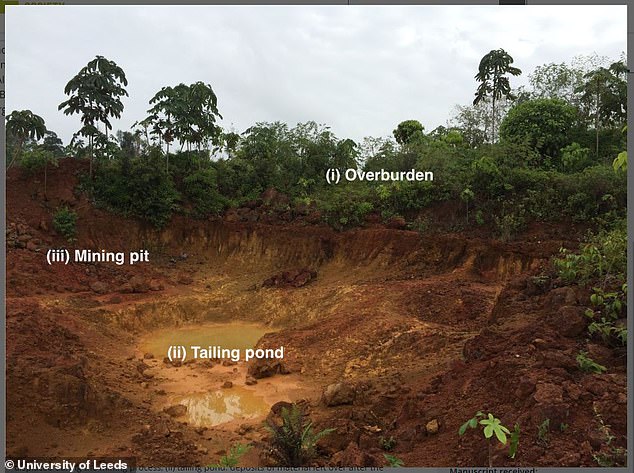 A study of former gold mining sites in the Amazon rain forest found lowered amounts of nitrogen in the soil and higher concentrations of mercury from mining equipment runoff, which prevented new plants and trees from growing for years

‘This study shows that tropical forests are strongly impacted by mining activities, and have very little capacity to re-establish themselves following mining,’ University of Leeds’s Michelle Kalamandeen told the university’s news blog.

For the study, the team focused on an area called the Guiana Shield, where some 90% of the total deforestation in the Amazon has taken place.

Deforestation related to mining in the Guiana Shield is responsible for the loss of more than two million tons of carbon stored in trees each year.

In ground samples around former mining sites, the team found mercury concentrations that were up to 250 times higher than normal. 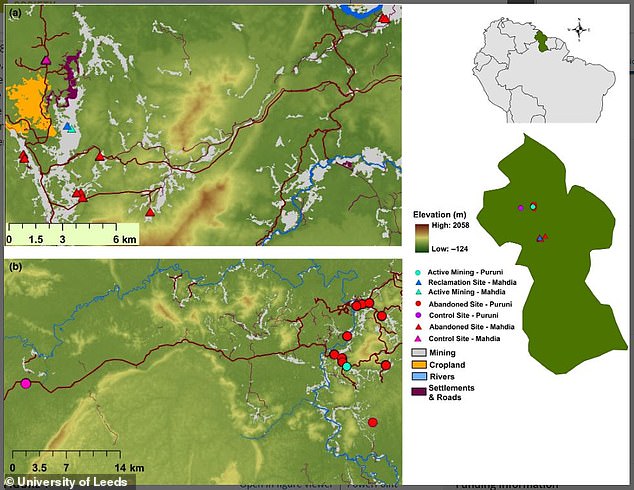 The team studied former mining sites in the Guiana Shield, a region of the Amazon spanning Guyana, Suriname, French Guiana, Venezuela, parts, of Colombia, and parts of Brazil

Grounds samples also had much lower amounts of nitrogen than normal, an important nutrient that helps fuel plant and tree growth.

‘Not only does this have serious consequences for our battle against global warming by limiting Amazonian forests’ ability to capture and store carbon, but there is also a larger implication of contaminating food sources especially for indigenous and local communities who rely on rivers,’ Kalamandeen said.

Mining operations currently affect more than 500,000 square miles of the Amazon, and the team called for better enforcement of laws protecting the rainforest and better safety standards for the mining industry. 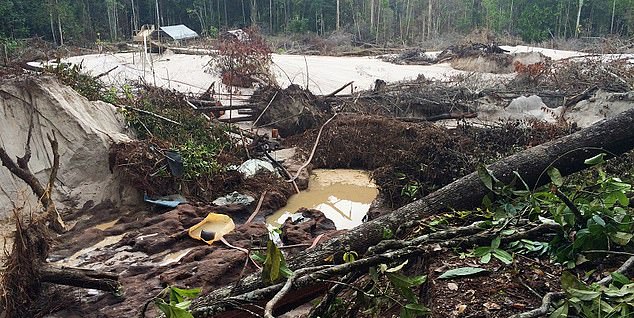 In addition to inhibiting new tree growth, the team found mercury runoff from mining sites was a threat to local food and water supplies

‘Active management and enforcement of laws is clearly needed to ensure recovery and to safeguard communities and there are methods available, such as replacing the soil using the overburdens at abandoned sites,’ Kalamandeen said.

‘But there is an urgent need for large-scale recovery management to be tested and implemented.’

‘We could be facing a race against the clock.’