Shocking 52.7 MILLION tons of electronic waste made up of phones, TVs and other gadgets was produced worldwide in 2019 – weighing the equivalent of 350 cruise ships

A shocking 52.7 million tons (53.6 million metric tonnes) of electronic waste was generated worldwide in 2019 – less than a fifth of which was recycled, according to UN report.

Electronic waste, also known as e-waste, consists of discarded phones, printers, TVs, electric toothbrushes and many other electronic goods no longer in use.

2019’s e-waste weighed more than all the adults in Europe, or as much as 350 cruise ships the size of the Queen Mary 2 – enough to form a line more than 75 miles long. 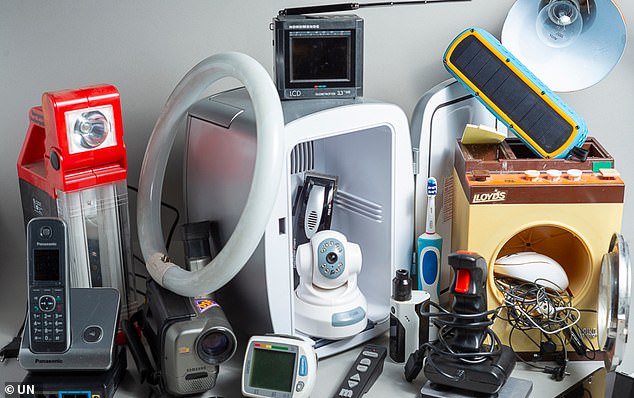 A record 52.7 million tons (53.6 million metric tonnes) of e-waste was produced globally in 2019, the weight of 350 cruise ships the size of the Queen Mary 2, the UN has revealed

E-waste is a health and environmental hazard, containing toxic additives or hazardous substances such as mercury, which damages the human brain.

After a device is discarded and e-waste is warmed up, toxic chemicals are released into the air damaging the atmosphere.

Although 71 per cent of the world’s population is covered by some form of e-waste policy, legislation, or regulation, greater efforts must be made in implementation and enforcement.

‘This report contributes mightily to the sense of urgency in turning around this dangerous global pattern.’

The UN’s Global E-waste Monitor 2020 report reveals that just 17.4 per cent of 2019’s 52.7 million ton e-waste total was officially documented as being properly collected and recycled.

Gold, silver, copper, platinum and other high-value materials collectively valued at $57 billion (£45 billion) – greater than the Gross Domestic Product of most countries – were mostly dumped or burned rather than being collected for treatment and reuse. 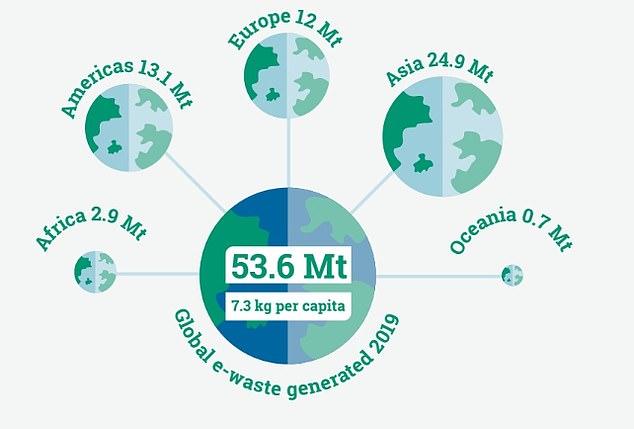 Asia generated the biggest proportion of 2019’s e-waste – 46.4 of the total for the year – followed by the Americas and Europe

However, the global e-waste problem could get worse by the end of the decade, adding an extra 19.6 million tons by 2030 to reach 72.8 million tons.

Helping drive this could be countries with developing markets, where an increasing number of household electronics like refrigerators, air conditioners, and lamps are now being bought.

But a global obsession with smartphones, which tend to be replaced by an updated model after a year and other tech gadgets with short lifespans also helps build e-waste piles.

It’s not that countries don’t have policies in place to fight e-waste – since 2014, the number of countries that have adopted a national e-waste policy, legislation, or regulation has increased from 61 to 78, the report said.

But advances are slow, enforcement is poor, and policies don’t yet ‘stimulate the collection and proper management’ of e-waste’ due to ‘lack of investment and political motivation’.

78 is also far from the target set by the International Telecommunication Union (ITU), the UN’s telecoms branch, which is to raise the percentage of countries with an e-waste legislation to 50 per cent.

Since 2014, the number of countries that have adopted a national e-waste policy, legislation or regulation in place has increased from 61 to 78. While a positive trend, this is far from the target set by the International Telecommunication Union, the UN’s telecoms branch, which is to raise the percentage of countries with an e-waste legislation to 50 per cent 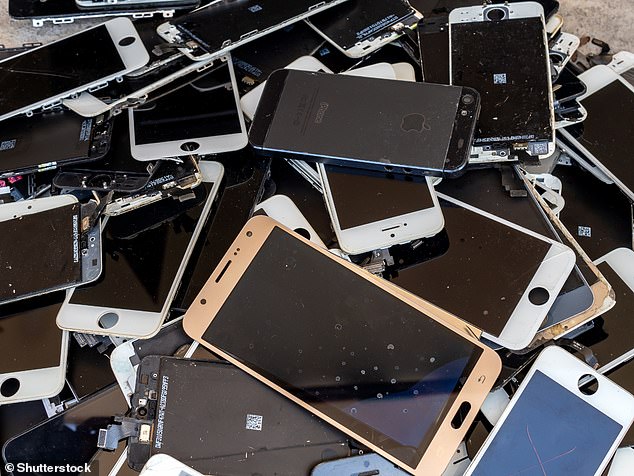 Smartphones, which tend to be replaced by an updated model after just a year, contribute to e-waste piles

The fact that the global e-waste pile has surged by more than a fifth since means the lack of effective policies around the world needs to be addressed.

In September 2015, the US and its member states adopted the 2030 Agenda for Sustainable Development, identifying 17 ‘sustainable development goals’ (SDGs) and 169 targets for ‘ending poverty, protecting the planet, and ensuring prosperity for all’.

Increasing levels of e-waste, improper and unsafe treatment, and disposal through incineration or in landfills pose challenges to achieving these goals, the report warns, as well as human health and the environment.

‘The Global E-waste Monitor highlights the pressing issue of e-waste management in today’s digitally connected world in that the way we produce, consume, and dispose of electronic devices has become unsustainable,’ said Doreen Bogdan-Martin at the ITU.

‘[The report] serves as a valuable resource for governments to improve their global e-waste recycling rate by developing the necessary e-waste policies and legislation.

‘Monitoring e-waste streams will contribute to the achievement of the sustainable development goals.’ 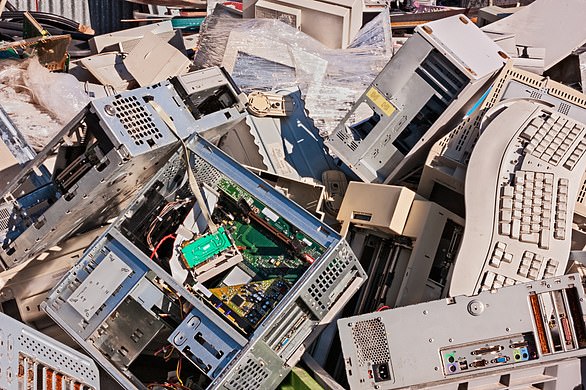 E-waste is discarded electronic appliances such as mobile phones, computers, and televisions

The following figures are highlights from the UN’s Global E-waste Monitor 2020 report, which quotes figures as million metric tonnes (Mt).

– In 2019, an estimated 98 Mt of CO2-equivalents were released into the atmosphere from discarded fridges and air-conditioners, contributing roughly 0.3 per cent of global greenhouse gas emissions

– In per capita terms, last year’s discarded e-waste averaged 7.3 kg for every man, woman and child on Earth

– Europe ranked first worldwide in terms of e-waste generation per capita with 16.2 kg per capita. Oceania came second (16.1 kg) followed by the Americas (13.3 kg). Asia and Africa were much lower: 5.6 and 2.5 kg respectively

– An estimated 50 tonnes of mercury – used in monitors, PCBs and fluorescent and energy-saving light sources – are contained in undocumented flows of e-waste annually

– Small IT and telecommunication equipment have been growing more slowly, and screens and monitors have shown a slight decrease (-1 per cent), explained largely by lighter flat panel displays replacing heavy CRT monitors and screens.

– Since 2014, the number of countries that have adopted a national e-waste policy, legislation or regulation in place has increased from 61 to 78.

– While a positive trend, this is far from the target set by the International Telecommunication Union which is to raise the percentage of countries with an e-waste legislation to 50 per cent.