Aboriginal stone tools dating back 8,500 years discovered off the coast of Western Australia mark out the sites of two ancient settlements submerged underwater since the last ice age

Two previously unknown Aboriginal sites have been discovered off the coast of Western Australia.

Archaeologists found stone tools and evidence of human habitation off the Pilbara coast – the first Aboriginal sites to be discovered underwater.

The ancient settlements were once on terra firma but became submerged as sea levels surged in the aftermath of the last ice age. 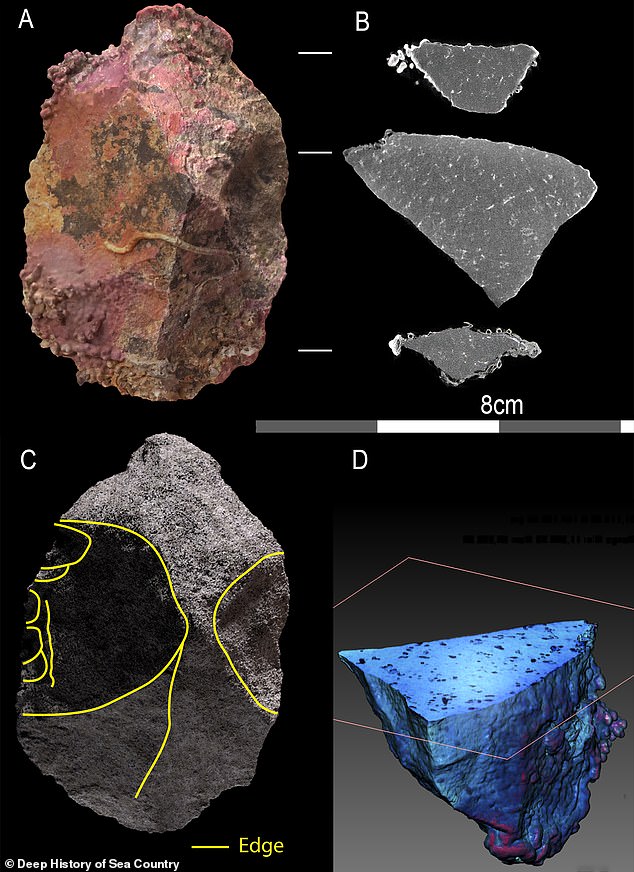 Pictured, images and scans taken of one of the artefacts found by the archaeologists. This is believed to be a stone tool used by Aboriginals around 7,000 years ago

One site had hundreds of atefacts, but the other site, at Flying Foam Passage (pictured), yielded just one artefact (left). It is believe more artefacts are likely hidden at this site

Divers found the two underwater sites through a series of surveys in the Dampier Archipelago.

The sites, at Cape Bruguieres and Flying Foam Passage, may provide insight into the Aboriginal way of life from when the seabed was dry land, researchers hope.

Modern-day Aboriginals still consider these marine environments to be sacred and they are now known as ‘Sea Country’.

Chelsea Wiseman, who has been working on the project as part of PhD research at Flinders University, said: ‘At one point there would have been dry land stretching out 160 km [100miles] from the current shoreline.

‘That land would have been owned and lived on by generations of Aboriginal people.

‘Our discovery demonstrates that underwater archaeological material has survived sea-level rise, and although these sites are located in relatively shallow water, there will likely be more in deeper water offshore.’

The divers mapped 269 artefacts, including tools and grinding stones, at Cape Bruguieres in shallow water around 7.8ft (2.4 metres) below modern sea level.

Radiocarbon dating and analysis of sea-level changes show the site is at least 7,000 years old, the researchers say. 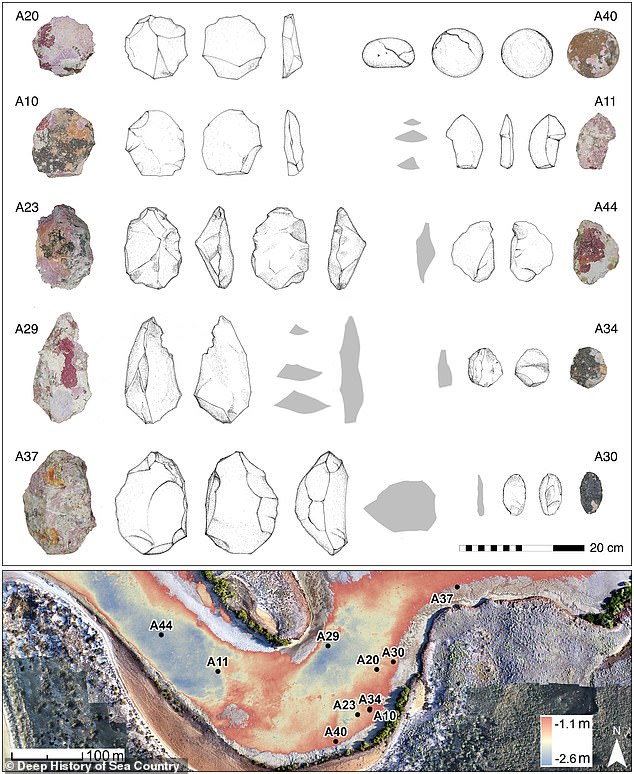 Incredibly rare pieces of tiny Neolithic rock art found in a shallow Australian cave were made by creating tiny stencils out of beeswax, researchers have concluded.

Located in the Yilbilinji rockshelter in northern Australia’s Limmen National Park, miniature stencils of this type are only known from two other sites across the globe.

Although the site — traditionally owned by the Marra Aboriginal people — has been known for decades, the tiny art was only documented in 2017.

Each of the images is less than 4.7 inches (12 centimetres) in length. 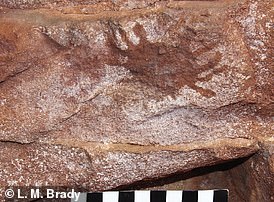 Incredibly rare pieces of tiny Neolithic rock art found in a shallow Australian cave, pictured, were made by creating tiny stencils out of beeswax, researchers have concluded

The second site at Flying Foam Passage includes an underwater freshwater spring 46 feet (14 metres) below sea level. This site is estimated to be at least 8,500 years old.

However, the true age of the sites could be even older, as the dating techniques only provide a minimum age.

Associate Professor Jonathan Benjamin, of Flinders University in Australia, said: ‘Australia is a massive continent but few people realise that more than 30 per cent of its land mass was drowned by sea-level rise after the last ice age.

‘This means that a huge amount of the archaeological evidence documenting the lives of Aboriginal people is now underwater.

‘Now we finally have the first proof that at least some of this archaeological evidence survived the process of sea level rise.

The research team used computer models to predict where these sites most likely would be and probed possible locations with various underwater and remote sensing techniques.

They were then investigated by a team of expert archaeologists.

The research team say that the discovery of the sites emphasises the need for stronger legislation to protect and manage underwater heritage in Australia.

Experts say there are up to two million square kilometres of submerged land which was once above sea level and it may provide major insights into human history.

Dr Benjamin added: ‘The ancient coastal archaeology is not lost for good; we just haven’t found it yet.

‘These new discoveries are a first step toward exploring the last real frontier of Australian archaeology.’

The findings were published in the journal PLOS One. 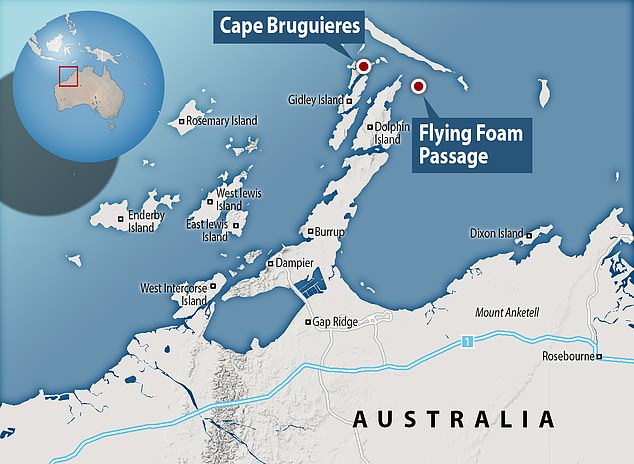