Giant penguin-like birds up to five feet in height roamed the Northern Hemisphere 37 million years ago like their ‘doppelgangers’ in New Zealand, fossilised bones reveal

Plotopterids, an extinct family of flightless seabirds, had strikingly similar bone fragments to the ‘monster penguins’ that lived in New Zealand more than 60 million years ago.

Although they existed at different times, both types of ‘mega fauna’ had long beaks with slit-like nostrils, and similar chest and shoulder bones and wing structures.

This suggests they were both strong swimmers that used their wings to propel themselves deep underwater in search of food.

Kiwi biologists say the similarity can help explain how birds such as today’s penguins developed the ability to swim with their wings and became less competent flyers. 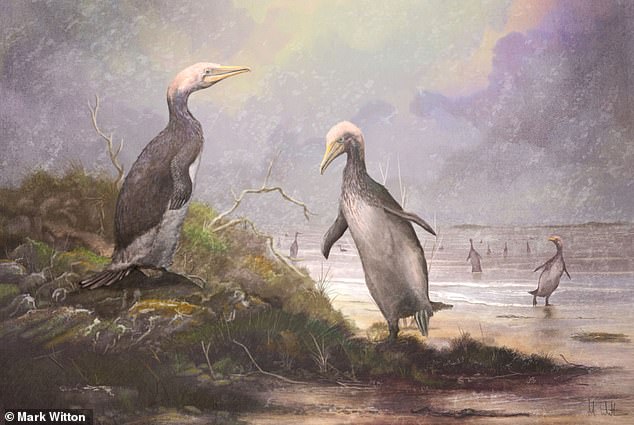 Plotopterids like these Copepteryx, which were endemic to Japan around 25 million years ago, looked remarkably like penguins

The scientists compared the fossilised bones of plotopterids with fossil specimens of the giant penguins Waimanu, Muriwaimanu and Sequiwaimanu from Canterbury Museum’s collection.

The first plotopterid species developed in the Northern Hemisphere much later than penguins, at some point between 37 and 34 million years ago.

But the team say some large plotopterid species would have looked very similar to the ancient penguins.

‘These birds evolved in different hemispheres, millions of years apart, but from a distance you would be hard pressed to tell them apart,’ said Dr Paul Scofield at Canterbury Museum.

It’s likely penguins and plotodopterids had flying ancestors that would plunge from the air into the water in search of food.

‘Over time these ancestor species got better at swimming and worse at flying,’ said co-author Dr Gerald Mayr, a German palaeontologist. 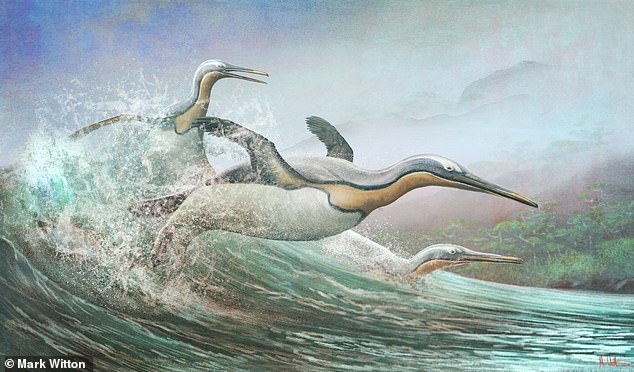 The giant penguins, like these Kumimanu, that lived in Aotearoa New Zealand around 60 million years ago bore a striking resemblance to some plotopterids

‘Wing-propelled diving is quite rare among birds as most swimming birds use their feet.

New Zealand is well known for its extinct giant birds, including the flightless moa, which was up to 11.9 feet (3.6 metres) tall, and Haast’s eagle, which had a wingspan of 9.84 feet (3 metres).

Around 62 million years ago, the earliest known penguins swam in tropical seas that almost submerged the land that is now New Zealand. 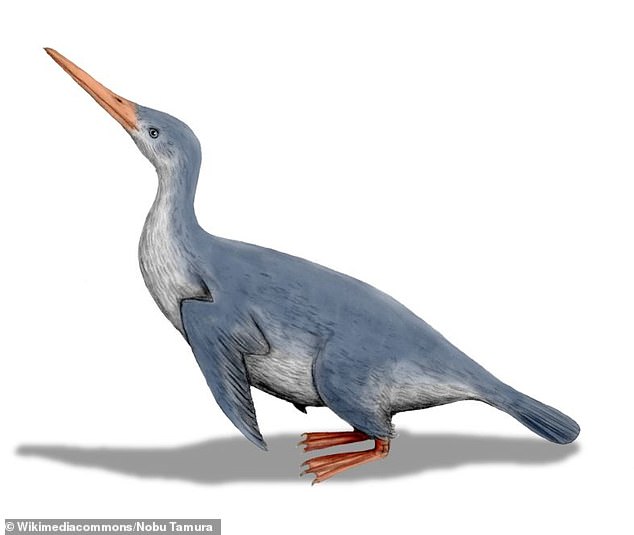 Palaeontologists have found the fossilised bones of these ancient waddlers at Waipara, North Canterbury.

They have identified nine different species, ranging in size from small penguins to 5.2-foot-high (1.6-metre-high) monsters.

Plotopterids, which have left fossil fragments in Japan, the US and Canada, used their flipper-like wings to swim through the sea just like penguins.

But unlike penguins, which have survived into the modern era, the last plotopterid species became extinct around 25 million years ago.

Despite sharing a number of physical features with penguins both ancient and modern, plotopterids are more closely related to boobies, gannets and cormorants than they are to penguins.

‘What’s remarkable about all this is that plotopterids and ancient penguins evolved these shared features independently,’ said Dr Vanesa De Pietri at Canterbury Museum in New Zealand.

‘This is an example of what we call convergent evolution, when distantly related organisms develop similar morphological traits under similar environmental conditions.’

Fossils from New Zealand’s giant penguins are currently on display alongside life-sized models of the birds in Canterbury Museum’s exhibition Ancient New Zealand: Squawkzilla and the Giants, extended until August 16, 2020. 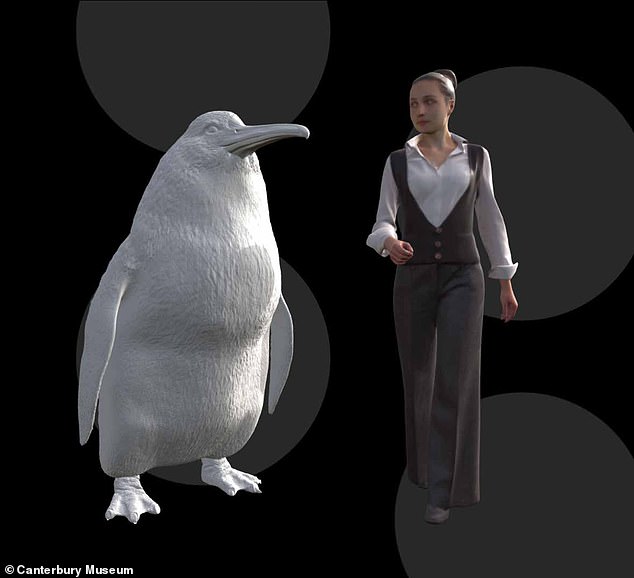 Crossvallia waiparensis, a monster penguin from the Paleocene Epoch (between 66 and 56 million years ago, was taller even than today’s four-foot (1.2 metre) Emperor Penguin 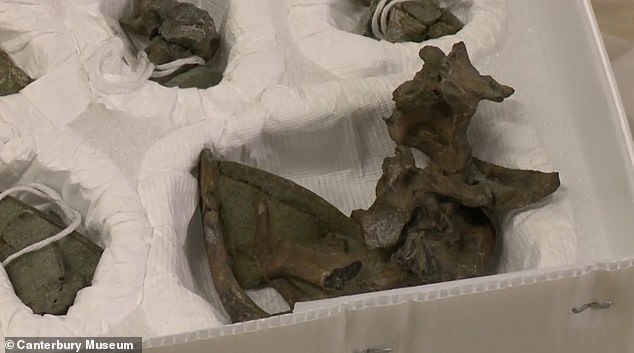 Crossvallia waiparensis, a monster penguin from the Paleocene Epoch (between 66 and 56 million years ago, was taller even than today’s four-foot (1.2 metre) Emperor Penguin and weighed up to 70 to 80 kg.

‘When the Crossvallia species were alive, New Zealand and Antarctica were very different from today – Antarctica was covered in forest and both had much warmer climates,’ Dr Scofield said at the time.

The team’s new research paper has been published in Journal of Zoological Systematics and Evolutionary Research.

Penguins are birds, so they do have wings.

However, the wing structures of penguins are evolved for swimming, rather than flying in the traditional sense.

Penguins swim underwater at speeds of up to 15 to 25 miles per hour.

As adept swimmers, penguins spend a lot of time in the water.

Some penguins spend up to 75 percent of their lives in the water.

Like other birds, penguins do lay eggs and they raise their chicks on land.

It’s been said that penguins ‘fly in water’ in an environment that is 900 times denser than air.

They move their wings in a very similar way to birds flying in the air.