This included donning red pants, a white shirt with an American flag and bald eagle graphic, and a red baseball cap with white lettering. 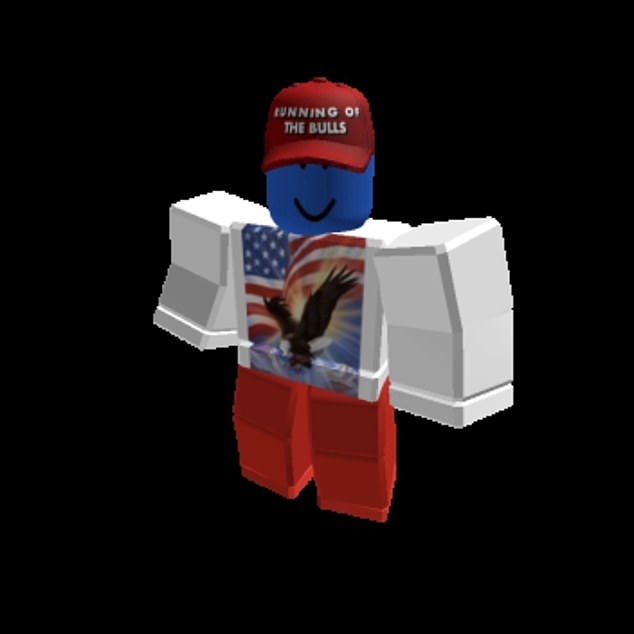 A coordinated pro-Trump hacking campaign appears to be targeting the kids video game Roblox, redesigning avatars in MAGA wear and sending messages that encourage kids to tell their parents to vote Trump in 2020

In the ‘About’ field of each hacked player’s main profile page, the message ‘Ask your parents to vote for Trump this year!#MAGA2020’ has replaced the original biographical information.

‘Why is my avatar this?’ one hacked player posted, according to a report from BBC ‘I’m not even American.’

The hacking campaign appears to have begun in late June, when around 500 accounts were compromised, and within a week the number has more than doubled.

Some players say they’ve been able to reclaim their hacked accounts, but Roblox has not commented on the hacking campaign or any investigative steps they’ve taken to stop it.

The Trump-inspired apparel relies on the creative combination of clothing options already available in the game.

More than 1,200 accounts appear to have been affected by the hacking campaign, which overwrites the ‘About’ field of each player’s profile with the message: ‘Ask your parents to vote for Trump this year!#MAGA2020’

The ‘American Eagle’ t-shirt was first introduced in 2008 as a customized player creation that was rarely seen or worn before the hacking campaign.

The red baseball cap is an official item designed by the game’s developers, Roblox Corporation, and says ‘Running of the Bulls’ in white lettering, a reference to the famous Sanfermines festival in Pamplona, Spain.

The white lettering becomes hard to read when the camera is panned back to its normal in-game view, and in conjunction with the t-shirt and the ‘MAGA2020’ slogan, the impression suggests a clear tie to Trump. 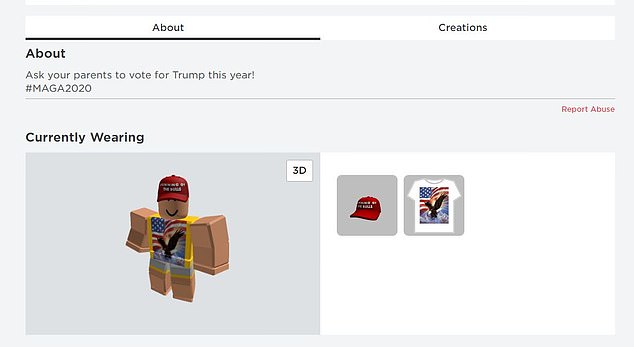 The hacking effort appears to be targeting players around the world. ‘Why is my avatar this? I’m not even American,’ one hacked player wrote on Twitter

The avatars are all made to wear the same obscure t-shirt featuring an American flag and bald eagle, a rarely-seen in-game item that was designed by a player in 2008

Roblox is an open-ended game where players create their own avatars and develop their own simple games to play with others in the game world, kind of a cross between Minecraft and Second Life.

The game currently has more than 100 million players around the world and is available on iOS and Android devices as well as Windows, MacOS, and Xbox One.

It was originally released in 2004, under the name Dynablox, but changed its name to Roblox in 2006 and has steadily grown into one of the most popular children’s games in the world.

The game has been a frequent target of hackers over the years, including a 2018 incident when hackers filled the game world with pornographic scenarios using the game’s crude avatars.