Britain may roast in temperatures exceeding 104°F every three to four years by 2100 if greenhouse gas emissions continue to increase, Met Office warns

Britain may roast in temperatures exceeding 104°F (40°C) every three and a half  years by 2100 under continued greenhouse gas emissions, forecasters warn.

Mathematical models created by the Met Office suggest emissions are increasing the likelihood of extremely warm days in the UK, particularly in the southeast.

Temperatures above 95°F (35°C), meanwhile, could be reached every day by the end of this century, the models reveal.

Met Office researchers had therefore wondered whether temperatures would ever exceed 104°F in the future, and, if so, how often.

Previous research provides strong evidence that such extremes are becoming more frequent and intense under the influence of human-caused climate change, due to the burning of fossil fuels and other carbon-belching activity. 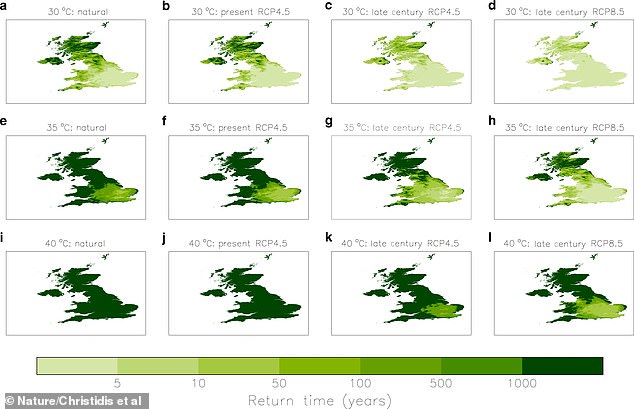 The UK’s national weather service already predicted 2020 to be one of hottest years on record, with heatwaves this summer that could kill more than 1,000 people.

‘Europe is gearing up for more frequent and intense heatwaves and while the UK has not yet borne the brunt of extreme continental heat, its summer temperatures are decidedly on the rise. 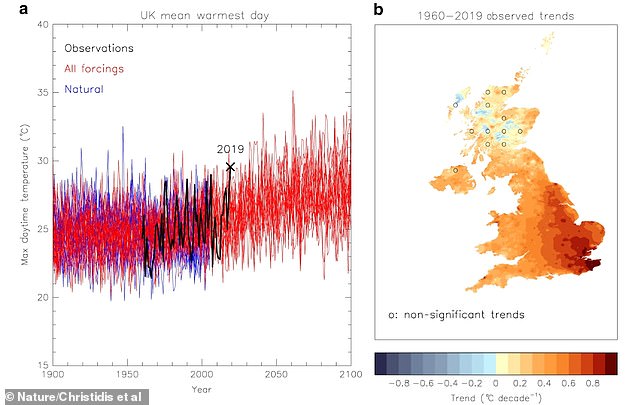 Image a shows the UK average warmest daytime temperatures from Met Office observations (black line) worked out from simulations with 16 CMIP5 models with all climatic forcings, incluidng human-made greenhouse gases (red lines) and natural forcings only (blue lines), which include only volcanic aerosol emissions and changes in the solar irradiance. The observed value in 2019 is marked with a cross. Simulations of future years follow the RCP 4.5 scenario. Image b) shows a map of the warmest daytime temperatures during 1960–2019 computed with Met Office data

‘The need to understand how the likelihood of extremely hot temperatures is changing under the anthropogenic effect on the climate is pressing and essential to decision-makers planning the UK’s adaptation strategy.’

Dr Christidis and his colleagues estimated changes in the likelihood of extreme temperatures occurring locally in the UK in a series of modelling experiments.

The team looked at the future climate scenarios predicted by Representative Concentration Pathway 8.5 (RCP8.5) and RCP4.5.

RCP8.5 is the highest level of projected greenhouse gas emissions and RCP4.5 features less intense emissions that span over a long period of time.

The change in frequency of exceeding different temperature thresholds depends strongly on the emissions scenario, with higher emissions leading to these events occurring more often over larger areas. 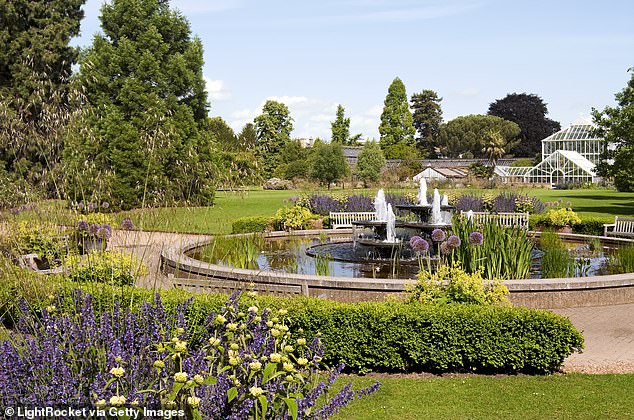 Pictured: A view over the Cambridge University Botanic Garden, where the record-breaking temperature was recorded in July 2019.

Temperatures above 95°F (35°C) are becoming increasingly common, especially in the southeast, and could occur every year by the end of the century, compared to every five years today.

Northern parts of the UK rarely experience extreme warm temperatures today and the worst of the recent heatwaves have impacted the south the hardest.

But in a future climate scenario even northern UK is likely to see temperatures exceeding 86°F (30°C) up to once a decade by 2100.

Currently, anywhere in the UK registering temperatures of 104°F (40°C) or more is extremely rare and estimated to only occur once every 100 to 300 years.

However, this could change to every 15 years under a medium-emissions scenario, and every 3.5 years under high emissions by the end of the century.

‘Our study demonstrates that human-caused climate change has set hot-day extremes in the UK on a course towards temperatures that would be too high to be observed in the natural climate,’ the Met Office team say. 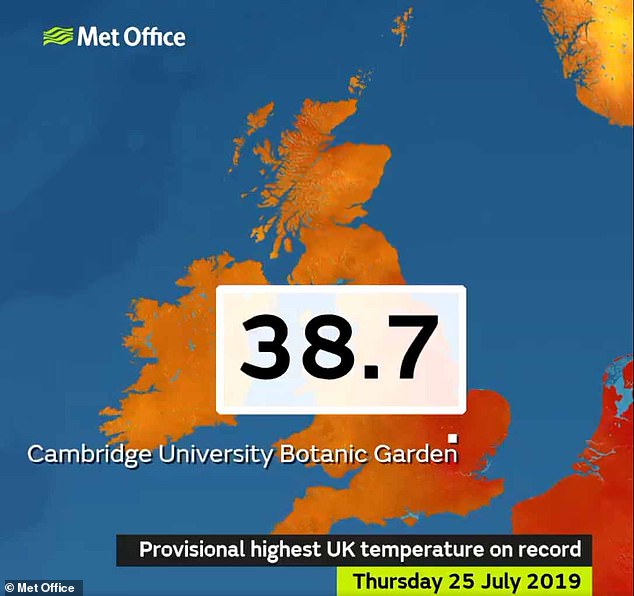 The Met Office confirmed the figure, recorded at the Cambridge University Botanic Gardens last year, was higher than the 38.5°C (101.3F) seen in Kent in August 2003. Temperatures above 35°C could be reached every day by the end of this century, Met Office research claims

‘As the warming continues, new records are expected in coming decades, with the most severe extremes likely to occur in the southeast of the UK.’

However, if emissions are reduced in line with the Paris climate agreement, which aims to hold the global average temperature increase to below 3.6ºF (2°C), the frequency of temperatures 104°F and over would be lower.

Researchers say their analysis can help the UK plan its resilience to heat extremes over the next few decades.

As well as providing the UK with the hottest ever temperature in Cambridge, July 2019 was the hottest month ever recorded globally after 140 years of record-keeping.

July 2019’s global temperature was 1.71°F (0.95°C) warmer than the 20th century average for July, according to the US National Oceanic and Atmospheric Administration.

The Met Office revealed earlier this month that May 2020 was UK’s sunniest calendar month on record and the driest May on record.

This was mostly due to an extended period of high pressure centred over or close to the UK that suppressed the development of clouds and rainfall over the UK, it said.

Last month was also the warmest May on record with global temperatures 1.13°F (0.63°C) above average, according to the European Union’s climate change monitor.

Public Health England revealed there were an estimated 892 ‘excess deaths’ among people aged over 65 in the summer months of 2019 – a figure that could reach 1,000 once this summer.

From around 2020, town halls will be allowed to levy extra charges on diesel drivers using the UK’s 81 most polluted routes if air quality fails to improve.