A fleet of steam-powered robots could one day be used to explore the moons of Jupiter and Saturn by ‘taking giant leaps across their frozen landscapes’.

If they ever move beyond the initial concept stage, the robots would let scientists explore icy moons such as Europa and Enceladus orbiting Jupiter and Saturn.

These moons are thought to harbour salty subsurface oceans of liquid water, but very little is known about their surface – making it a potentially challenging terrain for a traditional moon rover, but easy for a leaping robotic ball powered by steam.

The bots, called SPARROW, would run on steam from ice that was collected by mining the surfaces of the moons they explore – rather than ‘dirty’ rocket fuel. 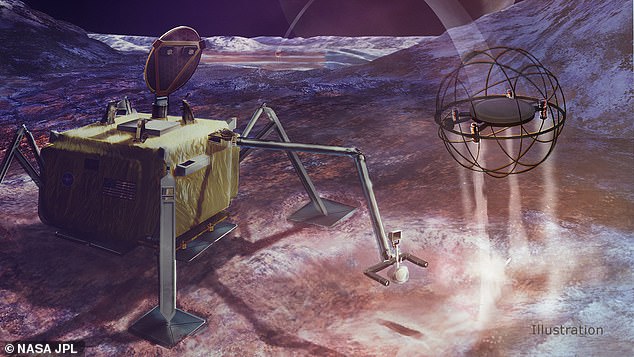 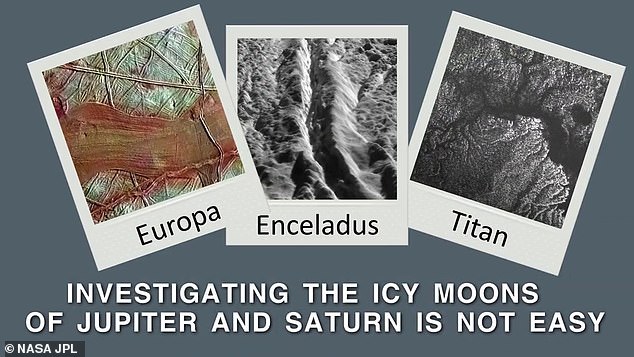 The robots will let scientists to explore the icy moons of gas giants such as Europa, Enceladus and Titan – which may harbour salty liquid oceans under their surface

This is just a theoretical idea at the moment, no robot has actually been built and the study of how it would work has been through computer simulations but researchers hope they will one day be used in a mission to these distant frozen moons.

Both are thought to host vast subsurface oceans of salty water under a thick ice crust, according to astronomers who have studied images of the moons.

While that makes them fascinating for scientific study, the little we know about their surfaces could also make navigating them especially challenging, NASA said.

SPARROW robots would be about the size of a soccer ball and include a system of thrusters, avionics and instruments encased in a protective spherical cage.

In the sort of low-gravity environment found on those distant icy moons, there’d be no atmospheric drag to slow it down, according to the NASA team.

This would enable SPARROW to take hops of many miles over landscapes that other robots would have difficulty navigating.

‘The terrain on Europa is likely highly complex,’ said Gareth Meirion-Griffith, JPL roboticist and the lead researcher of the concept.

‘It could be porous, it might be riddled with crevasses, there might be meters-high penitentes’ – long blades of ice known to form at high latitudes on Earth – ‘that would stop most robots in their tracks,’ he said.

‘But SPARROW has total terrain agnosticism; it has complete freedom to travel across an otherwise inhospitable terrain.’ 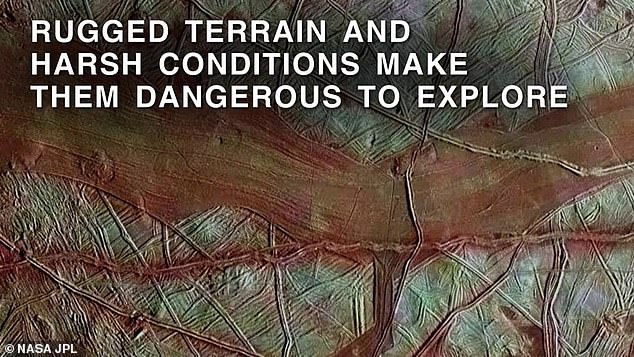 This is just a theoretical idea at the moment, no robot has actually been built and the study of how it would work has been through computer simulations but researchers hope they will one day be used in a mission to these distant frozen moons 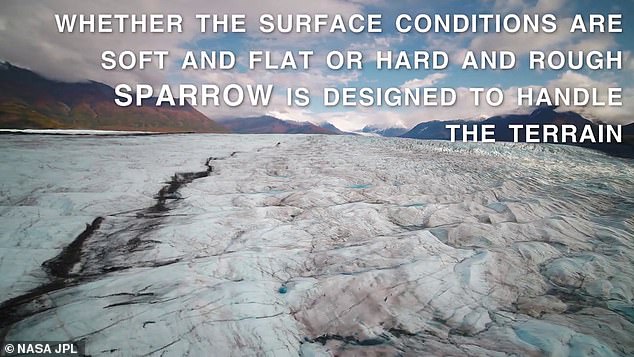 The concept depends on a lander serving as the home base for SPARROW that would mine the ice and melt it down before loading it into the hopping robot.

SPARROW would then heat the water inside its engines, creating bursts of steam to give a boost off the surface, according to its developers.

When low on fuel, the hopping bot would return to the lander for a top up while also dropping off any scientific samples for further analysis.

To maximise the science investigations that could be done, many SPARROWs could be sent together, swarming around a specific location.

They could also be split up to explore as much alien terrain as possible.

In 2018, SPARROW was awarded Phase I funding by the NASA Innovative Advanced Concepts (NIAC) program, which nurtures visionary ideas that could, someday, be used in future space missions. 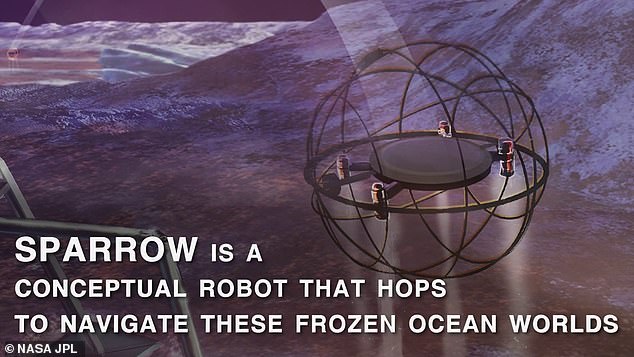 SPARROW robots would be about the size of a soccer ball and include a system of thrusters, avionics and instruments encased in a protective spherical cage

Phase I studies explore the overall viability of the idea and advance the Technology Readiness Level – in anticipation of bidding for Phase II funding.

For SPARROW, the Phase I funding allowed the development and testing of different water-based propellant systems that could be used to produce steam in the most efficient way.

Additionally, the SPARROW team was able to better understand how the spherical robot might tumble when landing on chaotic icy terrain by using computer simulations, thereby identifying the most efficient angle of launch and speed of hop.

‘From this, and related propulsion calculations, we were able to determine that a single long hop would be more efficient that several smaller hops,’ they said.