A new treatment designed to ease the agony of lower back pain suffered by millions of people only needs to be administered once every two months, scientists claim.

The drug, called tanezumab, inhibits nerve activity and has been found to provide relief in patients with chronic lower back pain – a leading cause of disability.

Researchers from the University of Rochester say it is a breakthrough in non-opioid treatment for chronic pain and could provide long-term relief to millions.

One single dose of tanezumab, delivered under the skin every two months, could bring long term relief to a third of the UK’s population, who suffer from back pain. 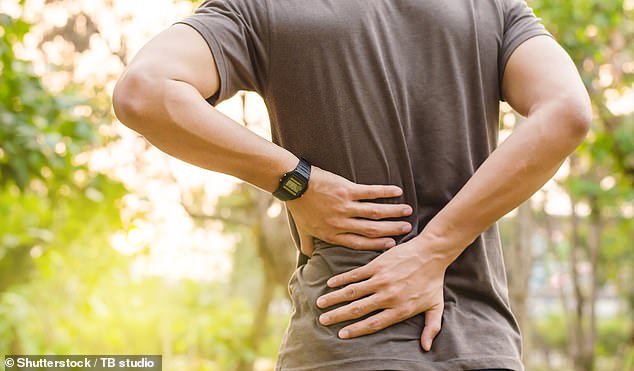 The drug, called tanezumab, inhibits nerve activity and has been found to provide relief in patients with chronic lower back pain – a leading cause of disability. Stock image

As part of the development of the therapy, researchers found certain proteins in the bloodstream heighten the sensitivity of cells in the nervous system to pain.

One of these proteins, called nerve growth factor (NGF), could explain why some people experience more intense pain than others.

Tanezumab, a monoclonal antibody, is known to inhibit nerve activity and in particular NGF.

The team tested their new therapy on patients who experienced lower back pain at nearly 200 sites across eight countries in North America, Europe and Asia.

The patients, who were considered ‘difficult-to-treat’ were already on at least three different types of pain medications, including opioids.

Opioids and other non-steroid anti-inflammatory drugs (NSAIDs), which are often used to treat back pain can have serious side effects, including joint problems.

Tanezumab has not been associated with these side effects, the team say.

However, this class of drugs has been linked to joint problems, which are sometimes serious enough to require joint replacement, the team said.

Because of this concern, the team followed participants for an extended period and determined there was a low rate of serious joint problems requiring replacement.

They found a single dose of Tanezumab every other month was enough to provide long term relief and the chances of developing serious joint problems were low.

Patients with symptoms or x-ray evidence of moderate-to-severe osteoarthritis, a disorder commonly found in older patients with chronic low back pain, were excluded from the study. 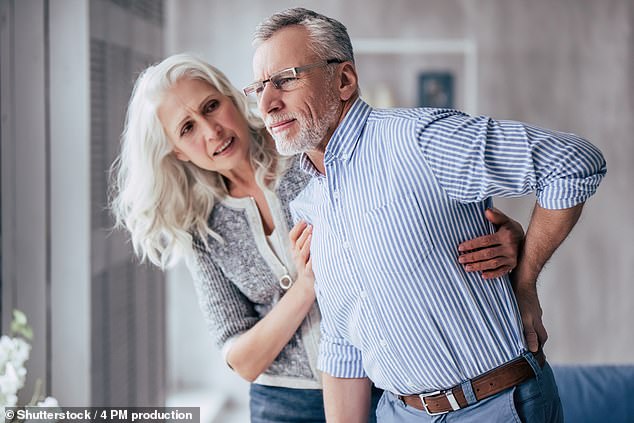 One single dose of tanezumab, delivered under the skin every two months, could bring long term relief to a third of the UK’s population, who suffer from back pain. Stock image

‘In the future, clinicians may have to weigh the risks of lumbar fusion surgery, chronic opioid use, or NSAIDs against the risks of a rare but rapidly progressive form of joint problem associated with blocking nerve growth factor,’ said Markman.

‘I expect that that the tradeoffs between benefit and risk will be different for osteoarthritis than for chronic low back pain.’

Lower back pain affects one in ten people worldwide, and causes more disabilities than any other condition.

Around 20 per cent of people who suffer from lower back pain in the UK will seek treatment, costing the NHS around £1 billion every year.

The NHS has warned referrals for spinal surgery are on the rise, and a growing number of patients are waiting more than 18 weeks from referral to treatment.