A murky brown German river, polluted by runoff from coalmines, could be restored and made clear thanks to a technique involved the by-products from brewing beer.

The ‘browning’ of the River Spree, that has led to some areas becoming an ecological dead zone, is the result of iron compounds from coal mines.

Researchers from the Leibniz Institute for Polymer Research plan to create ‘filter bags’ made from yeast, sugars and spent-grains to ‘attract’ the iron compounds and then eventually remove them from the water.

Lead researcher Simona Schwarz said the bags would remain in the water for six months and when collected clumps of iron could then be sold on to steelworks.

The team from Leibniz are working with the Technical University of Munich and industry partners to create the filter bags which should be ready to use by 2022. 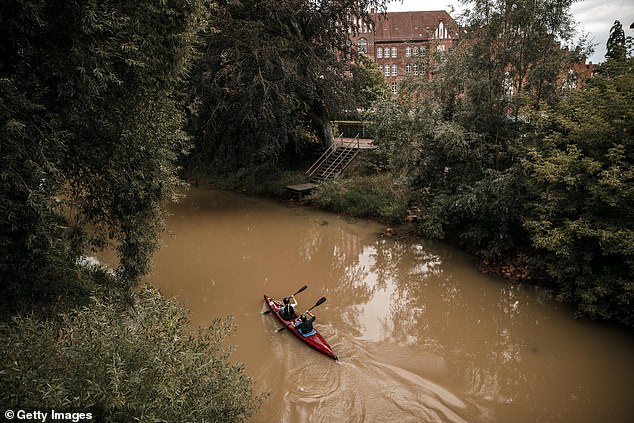 A murky brown German river, polluted by runoff from coal mines, could be restored and made clear thanks to a technique involved the by-products from brewing beer

These bags will be coated with tank sugar from brewer’s yeast and then hung in their hundreds in the river to free it of the heavy elements causing the pollution.

‘The breweries are looking for a lucrative way to make something of their spent grains, their yeast and other brewing by-products,’  said Schwarz.

‘We believe we can use them to filter out iron particles and other heavy metals from the water,’ she told local newspaper Dresdner Neueste Nachrichten.

The browning has left some utility companies serving areas surrounding the river struggling to provide residents with clean drinking water.

Researchers believe that a combination of brewer’s yeast and spent grains can be used as a filter.

The sugar from the yeast can be turned into a chemical that makes up crab pincers called chitosan.

Together these products and chemicals are put in a filter bag.

Hundreds of these bags are placed in the water and over six months.

The iron compounds cling to the chemicals and brewing by-products contained in the bag.

This will remove the ‘browning’ causing metals from the water when the bags are removed.

It’s also important for the tourism industry. As Schwarz said to DNN ‘Who wants to see brown rivers while on vacation?’.

Areas surrounding the river have become so polluted by these heavy elements that they are ‘dead zones’ with no fish, plans or thriving eco-system.

Some attempt has been made to try and clear the pollution from the River Spree.

Barriers have been put up on the upper Spree in an effort to sift out the pollutants but more exotic techniques are being looked into by utility firms.

This includes sulphate-eating bacteria, wells that divert groundwater and of course this new technology that makes use of the by-products of beer production.

Researchers say these brownings have become worse over the past 30 years – since the collapse of the former East Germany which ran the coal mines.

The pumps keeping the mines dry stopped being used as the former East Germany collapsed and more contaminants spread into the groundwater.

Schwarz said her technology merges brewery waste with a chemical found in shells of crustaceans called Chitosan – this chemical can be created from beer yeast.

The yeast, grains and chitosan act as a natural filter that attracts the iron particles and other heavy metals out of the water.

They will create filter bags made of these chemicals and waste products that will line the river and ‘collect’ the pollutants over about six months. 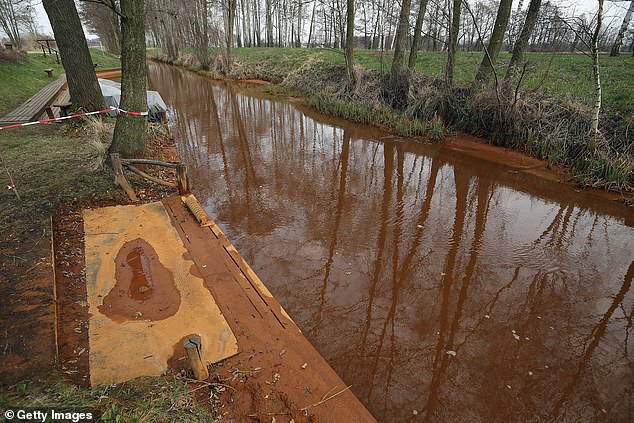 Researchers from the Leibniz Institute for Polymer Research plan to create ‘filter bags’ made from yeast, sugars and spent-grains to ‘attract’ the iron compounds and then eventually remove them from the water

Then workers can collect the bags, recover lumps of iron from them and possibly even sell them on for reuse in steel works.

It’s hoped the first pilot of the brewing filters will be ready by 2022.

If successful, the team hope to be able to use production waste from breweries to clean streams, rivers and waste water elsewhere.

Schwarz said different by-products could be used for other materials, for example, Barley naturally absorbs manganese – which means it could be used to filter it from rivers or streams.

Researchers say there are about 1,400 breweries throughout Germany producing two million tons of spent grains and 180,000 tons of yeast every year.