Many of the world’s most vulnerable children are currently miss out on life-saving vaccinations because the jabs rapidly spoil if not refrigerated.

However, a recent breakthrough in vaccine preservation could allow the crucial jabs to be stored at room temperature for up to three years without losing effectiveness.

This will allow medics to distribute the vaccines more widely, scientists hope.

It will be particularly valuable for vaccination programmes in low-income nations where current healthcare infrastructure is unable to provide the chilled vaccinations.

The procedure has proved effective in lab and real-world tests, and could be ready for humans in five to 15 years, it is hoped. 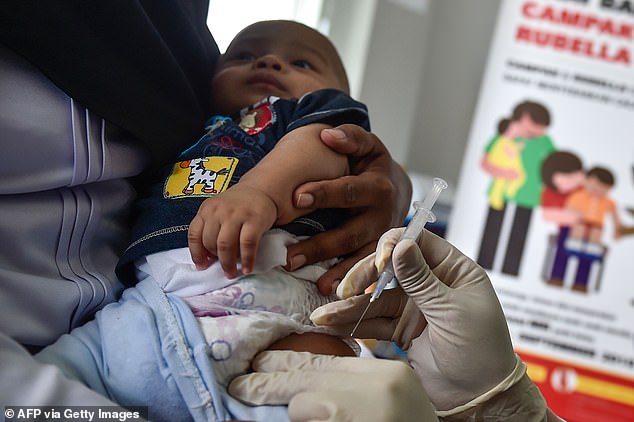 Pictured, a child in Indonesia receiving a vaccination. According to WHO data, less than two thirds of children in the nation receive their DTP vaccination which protect against diphtheria, tetanus and pertussis. The new method will make it easier for vaccines to be transported and delivered t the world’s most vulnerable children

Researchers from the universities of Bath and Newcastle have been tackling the issue of spoiling vaccines for years.

They found formulas are safe and stable if constantly chilled to between 2°C and 8°C.

However, outside of these temperatures, key proteins in the vaccine begin losing their shape and unravelling, rendering them useless.

Dr Asel Sartbaeva from the University of Bath has been heading up the project and pioneering a method called ensilication.

Her technique involves encasing the proteins which are prone to distorting in an inorganic and non-toxic shell made of silica.

Vaccinations for various unpleasant and deadly diseases are given free on the NHS to children and teenagers.

Here is a list of all the jabs someone should have by the age of 18 to make sure they and others across the country are protected:

Lab-based studies had previously proved  this method had potential, but it has now been shown to work in the real world.

New research, published today in Scientific Reports, reveals the simple way in which the team tested their procedure.

They packed up two batches of a tetanus vaccine, one ensilicated and one regular.

Both were sent by post from a lab in Bath to colleagues in Newcastle, a trip of more than 300 miles which takes a number of days.

When the vaccines arrived at the northern laboratory, they were injected into two separate batches of mice.

The vaccine coated in silica was found to work perfectly, triggering an immune response in the mice. The standard version was ineffective, having denatured in transit due to the warm temperatures.

By testing it in this way and finding the vaccine worked after being ensilicated, Dr Asel Sartbaeva says it conclusively proves that the process ‘preserves not just the structure of the vaccine proteins but also the function’.

She adds that the success of this step in the project is ‘really exciting data’.

Dr Sartbaeva and her team are trying to bring vaccinations to millions of people who currently can not receive vaccinations.

Around 50 per cent of vaccine doses are discarded before use because they can not be cooled and transported adequately, says the World Health Organization.

Dr Sartbaeva said: ‘Ultimately, we want to make important medicines stable so they can be more widely available.

‘The aim is to eradicate vaccine-preventable diseases in low income countries by using thermally stable vaccines and cutting out dependence on cold chain.’

The team has so far been focusing on tetanus vaccines, but will now attempt to replicate their success and make thermally-stable vaccines for diphtheria and whooping cough.

‘This project has focused on tetanus, which is part of the DTP (diphtheria, tetanus and pertussis) vaccine given to young children in three doses, says Dr Sartbaeva.

‘Next, we will be working on developing a thermally-stable vaccine for diphtheria, and then pertussis.

‘Eventually we want to create a silica cage for the whole DTP trivalent vaccine, so that every child in the world can be given DTP without having to rely on cold chain distribution.’