A new type of contraction of the womb that occurs long before childbirth – and has been linked to a possible risk of smaller and pre-term babies – has been discovered by British scientists.

Researchers from Nottingham University revealed the discovery, which they call the ‘uteroplacental pump’, in the journal PLOS Biology.

The contraction has been linked to a possible risk of pre-eclampsia – a condition which can lead to smaller and pre-term babies.

Women with pre-eclampsia show signs of high blood pressure and pass an abnormal amount of protein in their urine. 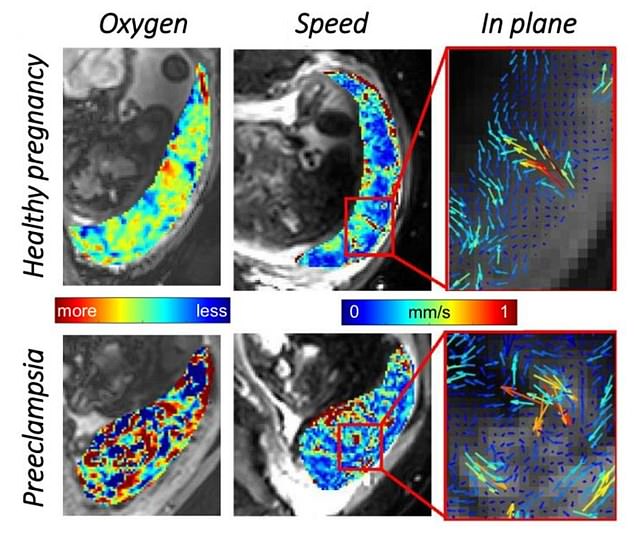 The placenta carries blood from the mother, where it transfers oxygen and nutrients to the baby’s blood supply.

Any disturbance to the flow of blood could affect the delivery of vital nutrients restricting foetal growth.

If the placenta is not working properly this can lead to pre-eclampsia. It is thought that the contractions shake up the placenta to ensure blood circulates more evenly.

Dr Neele Dellschaft, from the University of Nottingham’s School of Physics and Astronomy led the research which used MRI scanners to look at the placenta in healthy pregnant women and those at risk of pre-eclampsia.

She said: ‘We found that in healthy pregnancies the blood flows very slowly. This seems odd at first but our other measurements suggest that this is a way in which the placenta can function efficiently. 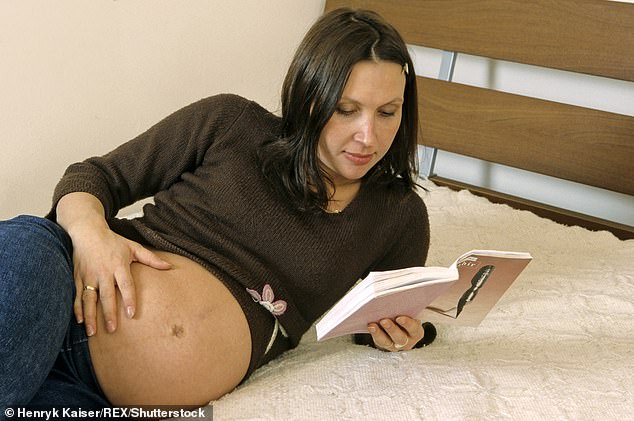 Researchers at Nottingham University made the discovery and dubbed it the ‘uteroplacental pump’. Pictured is a pregnant woman (stock)

Pre-eclampsia is a serious condition of pregnancy, and can be particularly dangerous because many of the signs are silent, while some symptoms resemble ‘normal’ effects of pregnancy.

Symptoms include high blood pressure; swelling around the face, eyes or hands; headaches; nausea or vomiting; changes in vision; and shortness of breath.

Pre-eclampsia is detectable through regular medical appointments that measure blood pressure, protein in the urine and weight gain. It is treated via medication and dietary changes.

The condition typically occurs after 20 weeks of gestation and up to six weeks postpartum (after delivery), but it can also occur earlier than 20 weeks.

Pre-eclampsia and other hypertensive disorders of pregnancy are believed to be responsible for 76,000 maternal and 500,000 infant deaths each year across the world.

‘We also found that the normal patterns of flow and oxygenation were much more variable in pre-eclampsia, which can help explain why babies of pre-eclamptic pregnancies tend to be smaller and often have to be delivered before term.

‘Most excitingly, we also identified a completely new phenomenon which we called the “uteroplacental pump”. This is a contraction of the placenta and the part of the uterine wall to which it is attached and it is not the same as the well-known Braxton Hicks contractions in which the entire uterus contracts in practice for labour.

‘We now want to work out the purpose of these contractions but we think it might be to stop blood stagnating in parts of the placenta.’

So-called ‘false labour’ pains – known as Braxton Hicks contractions – are well known and common in healthy pregnancies and can worry many women into thinking they are about to give birth.

The research team scanned 34 women with healthy pregnancies and 13 women diagnosed with preeclampsia, gaining an unprecedented insight how the maternal blood percolates between the villi and how this affects placental oxygenation.

Professor Penny Gowland added: ‘At present we have no clinical tools to assess the function of the placenta directly, all we can do is assess the size and growth of the baby and blood flow in the umbilical cord using ultrasound.

‘This research demonstrates that MRI is hugely effective in providing detailed information of exactly what is happening between the baby and the mother and what is changed in a pre-eclampsia pregnancy.

‘We hope in the future this knowledge can be built upon by clinicians to better diagnose and manage conditions like preeclampsia.’