A third of women living in Europe inherited a gene from Neanderthals that increases fertility and reduces the risk of miscarriage in early pregnancy, a new study claims.

The study published by researchers at the Max Planck Institute found one in three women inherited their receptor for progesterone from our ancient cousins.

Biobank data showing the medical records and DNA of more than 450,000 participants across Europe allowed the team to spot the inherited gene.

They say 29 per cent carry one copy of the Neanderthal receptor and three per cent have two copies of the gene that can also lead to fewer bleedings during pregnancy. 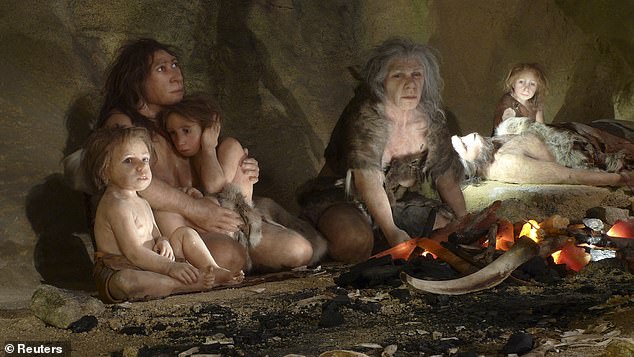 The study published by researchers at the Max Planck Institute found one in three women inherited their receptor for progesterone from our ancient cousins. Stock image

Researchers, including a team from the Karolinska Institute in Sweden say the third of women with the gene are also likely to have more children over their lifetime.

‘The progesterone receptor is an example of how favourable genetic variants that were introduced into modern humans by mixing with Neanderthals can have effects in people living today,’ says Hugo Zeberg from the Karolinska Institute.

The gene is in modern women as a result of distant interbreeding between modern humans and Neanderthals – up to 65,000 years ago.

Neanderthal-derived DNA has been found in the genomes of people living in all modern human populations and accounts for 1-4 per cent of modern genomes.

The team used information on genomes sequenced from ancient humans – found in buried in caves or bogs – the oldest discovered was from 40,000 years ago in China.

They then compare those genomes to modern humans and track the spread of the Neanderthal genes over thousands of years.

Molecular analyses of the women with the receptor found they produce more progesterone receptors in their cells.

Authors say this may lead to increased sensitivity to progesterone and protection against early miscarriages and bleeding. 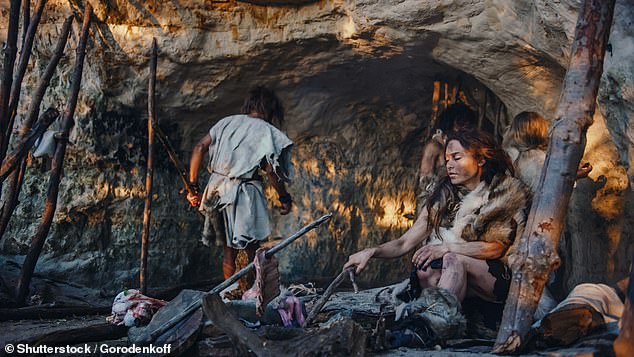 Researchers, including a team from the Karolinska Institute in Sweden say the third of women with the gene are also likely to have more children over their lifetime. Stock image

‘The proportion of women who inherited this gene is about ten times greater than for most Neanderthal gene variants,’ says Hugo Zeberg.

‘These findings suggest that the Neanderthal variant of the receptor has a favourable effect on fertility.’

Researchers say that having the Neanderthal progesterone receptor could help women maintain pregnancies that may have resulted in a miscarriage – although it can also lead to more early pre-term births.

As well as the progesterone receptor, studies found genes that are linked to prostate cancer risk, iron retention, blood clotting speed and smaller height from our cousins.

The new study was published in the journal Molecular Biology and Evolution.

A CLOSE HUMAN RELATIVE, THE NEANDERTHALS, DIED OUT AROUND 40,000 YEARS AGO

The Neanderthals were a close human ancestor that mysteriously died out around 40,000 years ago.

The species lived in Africa with early humans for hundreds of millennia before moving across to Europe around 300,000 years ago.

They were later joined by humans taking the same journey some time in the past 100,000 years.

The Neanderthals were a cousin species of humans but not a direct ancestor – the two species split from a common ancestor –  that perished around 50,000 years ago. Pictured is a Neanderthal museum exhibit

These were the original ‘cavemen’, historically thought to be dim-witted and brutish compared to modern humans.

In recent years though, and especially over the last decade, it has become increasingly apparent we’ve been selling Neanderthals short.

A growing body of evidence points to a more sophisticated and multi-talented kind of ‘caveman’ than anyone thought possible.

It now seems likely that Neanderthals buried their dead with the concept of an afterlife in mind.

Additionally, their diets and behaviour were surprisingly flexible.

They used body art such as pigments and beads, and they were the very first artists, with Neanderthal cave art (and symbolism) in Spain apparently predating the earliest modern human art by some 20,000 years.